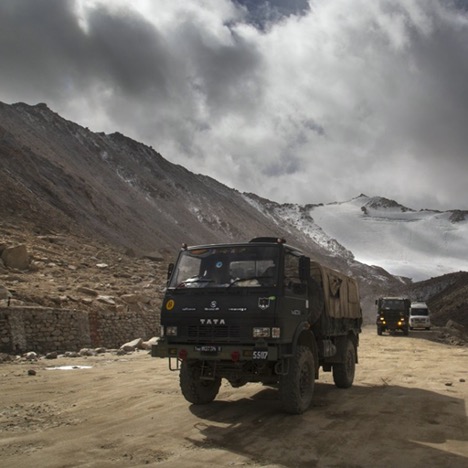 New Delhi. Chinese intransigence across the LAC (Line of Actual Control) has been a constant feature of the India-China relationship for many years, but it has taken on an extremely ominous turn in Eastern Ladakh this year.

The face off at Galwan on June 15, which led to the loss of 20 precious lives of the Indian Army, including that of Col B. Santosh Babu, the Commanding Officer of 16 Bihar, is an inflexion point in the relationship between the two countries which has dramatically altered the status quo and which is perhaps the lowest point in the relationship after the 1962 war and the violent clashes which took place at Nathu La in 1967. The number of Chinese casualties is not known, though some press reports state that about 43 Chinese soldiers were also killed in the violent face-off that occurred.

That the Chinese have been nibbling at Indian territory since long is well-known and has given rise to the term ‘salami slicing’.

This occurs because at various places the distance between the Indian held posts and the positions which are occupied by Chinese troops is very large. The intermediate gap between the two is patrolled by both sides to the extent of what each perceives to be within its area. This has led to clashes in the past, though never to an extent where lives have been lost.

But the Chinese, with better road communications are more advantageously placed and it is only now that India is playing a catch up game in building up its infrastructure.

The area in Eastern Ladakh under discussion extends from the Karakoram Pass, lying at an altitude of 18,176 feet, and which is a clearly identifiable marker as representing the boundary between India and East Turkestan (Xinjiang), to the Depsang Plains, the Galwan Valley, Area Hot Springs and the Pangong Tso.

These are all high altitude areas, lying at altitudes ranging roughly between 16,000 feet to 20,000 feet. The LAC lies along these points, though it is neither demarcated nor delineated. No maps have been exchanged between the two sides, which specify what each country perceives to be as its side of the LAC.

The Shyok River runs to the west of the LAC. Further west is the Siachen Glacier, which forms a rough triangle and lies in between the Karakoram Pass to its east and the Saltoro Ridge to its west. The Saltoro Ridge runs roughly northwards from NJ 9842. In 1949, in terms of the Karachi Agreement, the Ceasefire Line between India and Pakistan was delineated up to this map coordinate and the area ahead was simply stated as “thence north to the glaciers”.

Under the 1972 Simla Agreement, the Ceasefire Line was converted into the LoC. The Saltoro Ridge runs northwards from NJ 9842 towards Indira Col and the Sia Kangri massif. Further north, lies the Shaksgam Valley, a tract of about 2,700 square miles, which is a part of Ladakh illegally occupied by Pakistan and given to China by Pakistan in a 1963 Agreement between the two countries. This agreement, of course, is not recognised by India.

The Saltoro Ridge lies at altitudes ranging between 18,000 feet to 23,000 feet, with the Siachen Glacier lying to its east. Approaches to the Glacier from the west are through the Saltoro Ridge, which is held by India.

India has recently completed a road which runs from Darbuk to Daulat Beg Oldie (DBO). At DBO is an Indian airstrip, where heavy-lift aircraft can land. To the North of the DBO lies the Karakoram Pass, at a distance of about 16 km. The road, called the Darbuk-Shyok-Daulat Beg Oldie (DSDBO) road, runs astride the Shyok River, past the confluence of the Shyok and Galwan rivers up to Murgo and then on to the Depsang Plains, finally terminating at the DBO airstrip.

India and China signed an Agreement on the Maintenance of Peace and Tranquility along the LAC on September 7, 1993. An Agreement on Confidence Building Measures in the Military Field along the LAC was signed on November 29, 1996. Another Agreement, reaffirming the Declaration on Principles for Relations and Comprehensive Cooperation between India and China, was signed on June 23, 2003. And on April 11, 2005, the two countries signed the fourth Agreement, on the Political Parameters and Guiding Principles for the Settlement of the India-China Boundary Question.

The April 11 Agreement also states: The Special Representatives on the boundary question shall continue their consultations in an earnest manner with the objective of arriving at an agreed framework for a boundary settlement, which will provide the basis for the delineation and demarcation of the India-China boundary to be subsequently undertaken by civil and military officials and surveyors of the two sides.

In 2013, the two countries also signed the Border Defence Cooperation Agreement (BDCA). Meetings of the Special Representatives have yielded no results and post the Galwan incident of June 15, it is self-evident that all the confidence building measures established post the Border Peace and Tranquility Agreement (BPTA) of 1993 are dead. Events Since May 2020 have sent a clear signal that China is no longer interested in observing any of the protocols. The relationship stands broken and how the two countries will move forward from here remains a matter of conjecture.

In any event, all the interlocking Agreements, from the Peace and Tranquility Agreement of 1993, to the BDCA of 2013, lie buried and as of now, have but academic interest.

That events would come to a boil at some time was perhaps on the cards as tactical indicators to that effect existed from quite some time.

In the Depsang plains, China built a road as early as 2009, which connected Sumdo to Patrol Point 13. Subsequent years have seen Chinese incursions in Depsang leading to face-offs with Indian troops. In 2014, there was an incursion in Chumar and in 2017, a protracted face-off at Doklam on the Bhutan-Tibet border which lasted for 73 days.

While the 2011 incursion was resolved by the military, all others required higher political intervention. An earlier face-off at Pangong Tso in September 2019, which had also led to a physical brawl when Chinese troops attempted to block an Indian patrol, was a precursor of things yet to come.

Strategic indicators of China following a more muscular policy have also been on the anvil since long. President Xi Jinping’s continuous exhortations to the PLA to be ready for war allied with structural reforms within the PLA to make it more combat efficient, China’s White Paper of 2019, and numerous articles coming out from China, seeking retaking of what China perceives to be its territory, are not just part of its ‘Three Warfares’ strategy, but a clear statement of future intent.

That China carries out an annual exercise in the Aksai Chin area opposite Eastern Ladakh was well known. The Indian Army too, carries out an exercise in its own area to match Chinese capability and to counter any potential threat that may arise.

This year, The Indian Army exercise was called off due to the spread of the SARS CoV-2 virus that causes Covid-19.

The Chinese PLA, on completion of its exercise, simply moved in and occupied positions in the Depsang Plains, Galwan Valley, Area Hot Springs and in Pangong Tso.

This move was apparently pre-planned and obviously had approval from the highest political authority.

India has thus been presented with a fait accompli.

While China has made a limited pull back in the Galwan Valley, there appears to be little movement elsewhere, especially in the Depsang area and in Pangong Tso, where the PLA has even constructed bunkers.

Chinese incursions cannot be countenanced, but other than the use of force, there seems to be little likelihood of the Chinese vacating the areas that they have transgressed into, in violation of the border protocols. There is of course, the possibility of diplomatic or political initiatives leading to a change in the Chinese stance, but that appears remote as of now.

Chinese actions have not been limited to the Himalayas but have also manifested in Hong Kong, where China is giving a go-by to the “One Country Two Systems” principle.

It is getting aggressive over Taiwan, and may seek to regain the Island through military force. In the South China Sea (SCS), it is getting increasingly assertive, and has laid claims to practically the entire area through its 9 dash line, on specious claims, giving scant respect to the claims of some of the ASEAN countries.

All this is an apparent bid towards seeking a bipolar status and being accepted as the second pole, along with the United States.

Whether China has moved too early in its bid for world domination is a moot question which is yet to be answered.

In all likelihood, the answer will be in the affirmative.

Chinese over-reach has already set in motion a counter reaction across the US and in India and also in some of the Western European capitals.

How this manifests remains to be seen.

In all likelihood, the Quad will in the near future become a security pact to guarantee free and open navigation in the Indo-Pacific.

It will perhaps become a Quad plus, with the support of some of the rim countries in Southeast Asia.

A cross-Strait crisis or any unforeseen incident in the SCS could well lead to a war, with untold consequences and it is not clear whether China is ready for such a conflict or if the US and Europe have the stomach for war. The imponderables are many.

For India, the possibility of a full scale conflict across the Himalayas can no longer be ignored.

Chinese actions do not stem from a need to guard its road linking Tibet to East Turkestan or of the need to dominate the DSDBO Road.

The larger intent will remain taking over the entire Himalayan Range from Arunachal to Ladakh, to gain control over the waters emanating from them.

China will keep nibbling away at Indian territory till it is militarily challenged and the time to throw that challenge is now.

There will be costs to be paid, but if that is not done now, it is merely postponing the inevitable, as China is unlikely to desist from its chosen course of action.

The key to a successful defensive battle in the Himalayas lies in dominating the skies over Tibet.

The time for procrastination is perhaps over.

The nation needs to stand united as never before to face the challenges that lie ahead.

The author is an army veteran. A former Director of the Centre for Land Warfare Studies (CLAWS), he is presently Director, India Foundation.

This article was published by India Strategic on August 2, 2020.