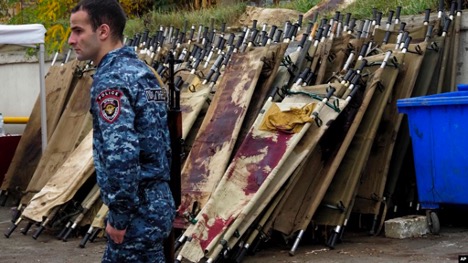 A recent article published on November 13, 2020 by Radio Free Europe written by Ron Synotviz provided a fascinating look at how Azerbaijan recovered Nagorno-Karabakh.

He argued in the article that Azerbaijan succeed because of combination of innovations in technology, tactics and the support of Turkey.

With regard to technology, Azerbaijan used hi-tech UAVs purchased from both Turkey and Israel. Armenian forces were overwhelmed by the drone waves.

“Margarita Karamian, an ethnic Armenian veteran of the 1992-1994 war from the town of Hadrut, said she was shocked when she saw formations of up to 30 Azerbaijani drones “darken the sky” over Nagorno-Karabakh’s southeastern flank during the first wave of the Azerbaijani military offensive.”

And Can Kasapoglu, director of the Security and Defense Research Program at the Istanbul-based Center for Economics and Foreign Policy Studies (EDAM).added:

“The first lesson that the Azerbaijani-Armenian clashes showed is the vulnerability of traditional land units — armored, mechanized, and motorized formations” in the face of advanced drone warfare weaponry and concepts,” Kasapoglu concluded.”

The tactics adopted were those of NATO troops against the Taliban.

“In those operations, NATO troops did not mass together in the thousands according to the methods of 20th-century conventional warfare — a strategy that requires the logistical complications of supply lines vulnerable to guerrilla counterattacks.

“Across the Afghan interior and along the 3,300 kilometers of border with Pakistan, small specialized U.S. commando teams were sent into Taliban territory to carry out “search and destroy” missions.”

As implemented by the Azerbaijanis, their forces operated with commando teams to defeat classic armed force defenses.

“In Azerbaijan’s offensive to the southeast of Nagorno-Karabakh, once gaps were opened in the Armenian defensive lines by the initial drone strikes, Baku’s commando teams infiltrated the forests and seized the high ground around towns and villages along the path of the advance.

“In Hadrut, just days before the two sides engaged in combat there, ethnic Armenian residents spoke of seeing “strange men, not Armenians” who’d infiltrated vacated houses to establish a presence in the town.

“Described as “saboteur groups” by both Baku and Yerevan, the Azerbaijani commando teams could provide target coordinates from their positions on the ground — directing fire from Azerbaijan’s nearby rocket launchers and howitzer artillery or from the air.

“Mustafa Hajibeyli, an Azerbaijani veteran of the war in the early 1990s, told RFE/RL that the tactic appears to have been repeated throughout the war as Baku’s forces took back towns and villages along the southern flank of Nagorno-Karabakh and the Iranian border — “forcing the enemy to surrender cities without major clashes.”

According to the article, Turkey played a key role in terms of sharing UAVs, their recent drone wave strike tactics and how to coordinate those with the NATO tactics learned by Turkey by being a member of the Alliance.

Featured Photo:A policeman walks past blood-stained stretchers at a morgue in Stepanakert, the main city in Nagorno-Karabakh, on November 6.