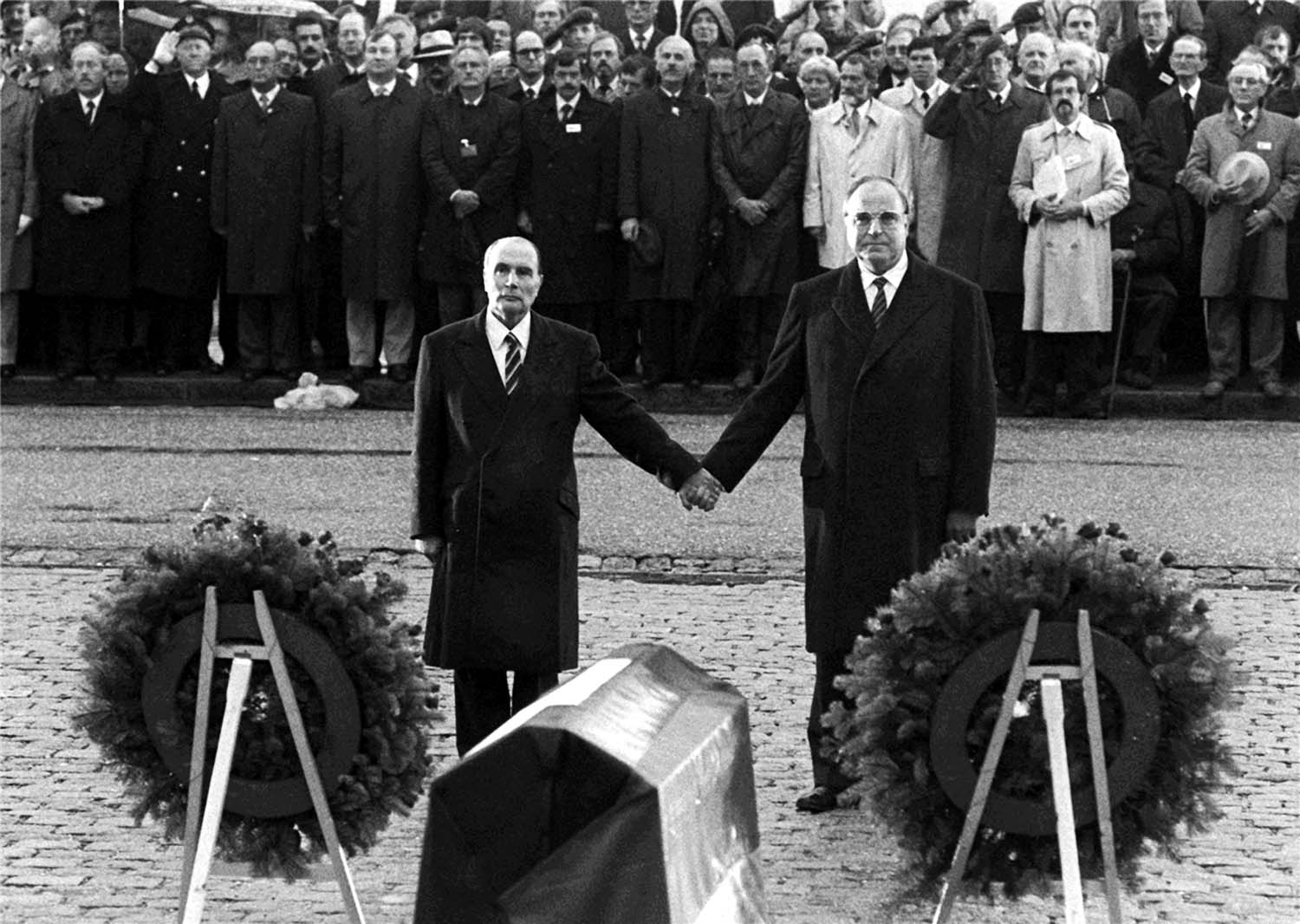 Paris – There is a black and white photo of the then French president François Mitterrand and then German chancellor Helmut Kohl standing hand in hand, playing tribute to the fallen on the Verdun battlefield in the first world war.

That news picture, taken Sept. 22 1984, summed up the spirit of Franco-German cooperation, as the two heads of state marked the 70th anniversary of the start of the great war, the one that would end all wars.

And in the previous decade, the then French president Valéry Giscard d’Estaing and then German chancellor, Helmut Schmidt, launched projects for a joint combat helicopter and a joint tank, a defense analyst said.

The helicopter project took flight with the Tiger attack helicopter built by Airbus Helicopters, while the tank was a paper tank left on the pages of feasibility studies.

Fast forward to president Emmanuel Macron and chancellor Angela Merkel announcing on July 13 2017 a plan to build a new fighter jet, the symbol of arms cooperation between the two European partner nations.

With political commitment at the highest level, the project assumes strategic importance.

It remains for French, German and Spanish contractors and governments to agree an industrial organization to build the next generation fighter, vital in the planned European future combat air system.

Therein lies the challenge. As the remarks on March 17 and 10 of senior executives of Airbus and Dassault Aviation to the French senate defense committee made clear, two business models are competing for the new fighter jet.

Airbus seeks an industrial cooperation with equal partners, and Dassault as the first among equals to resolve disputes, while Dassault seeks to be prime contractor.

Until the balance of partner or prime is decided, an estimated €3 billion ($3.6 billion) of contracts for a technology demonstrator for the fighter – and the FCAS – are waiting for signature. The clock is ticking, as general and presidential elections loom this year and next.

The stakes are high as the fighter project stands to be the cornerstone of future technology, the analyst said.

So how does a French official or executive see the European partners?

The German approach was “brutal and direct,” the analyst said. Reaching consensus with the German side was key. Once agreement was reached, it would be hard to get the German partner to move – but it was possible. There was a fair amount of politics behind that.

In cooperative programs, the British are “highly flexible,” while defending their interests, the analyst said. The Italians also show flexibility and will find the funds to back a program.

Working on the Alphajet led to a German view that Dassault “was the chief,” leaving a negative experience in working with the French, the analyst said.

In company values, Dassault is a family owned business with a 27 percent stake on the stock market, with a sense of family history dating back to invention of an aircraft propellor in the first world war. On the Avenue Champs Elysées, that hallmark address of the capital, there is a traffic roundabout named after Marcel Dassault, eponymous founder of the company.

While Dassault is a medium size company and Airbus a multinational, both share a common aim – pursue both military and civil sales in a bid to spread the business risk.

In Toulouse, southwest France, Airbus named a new assembly plant after Jean-Luc Lagardère, founder of the company which bears his name. The Lagardère company merged its Matra missile unit with state-owned Aerospatiale to form the French partner of Airbus.

The Lagardère factory will be used to build the A321 single aisle airliner, to lighten the load on the Airbus Hamburg plant.

MBDA has shown cooperation is “very complicated,” calling for compromise and an extra effort, a defense specialist said. Airbus and BAE Systems each holds 37.5 percent, and Leonardo 25 percent of the European missile maker.

That cooperation seems to have worked as Britain and France agreed to an industrial consolidation of the missile sector, with the creation of MBDA centers of excellence, with the two nations accepting an interdependence previously unseen.

Antoine Bouvier, Airbus strategy director, is well versed in European cooperation having previously been chief executive of MBDA and sat on the supervisory board of KNDS, a joint venture between Nexter and Krauss-Maffei Wegmann.

An Anglo-French agreement to build a common cruise missile, namely the Scalp and Storm Shadow, allowed the creation of the Matra BAe Dynamics, rebranded as MBDA.

The only difference on the two missiles are the locks which attach the missiles to the wing, a third defense source said. Other than that, the weapons are identical. The backing of the then MBDA chief executive Fabrice Bregier and the French Direction Générale de l’Armement procurement office were critical for that deal.

London and Paris are extending that bilateral cooperation with a next generation cruise missile to replace the Scalp and Storm Shadow.

On the call for consensus among equal partners, the then DASA aerospace company called for a 50:50 partnership in 1999 merger talks with BAE Systems, despite the UK company clearly outweighing in financial value the prospective German partner.

That deal collapsed when BAE opted to acquire GEC’s Marconi electronics business, leaving DASA to merge with Aerospatiale-Matra, effectively opting for a plan B. The European Aeronautic Defence and Space (EADS) company grew out of that deal, with the Airbus rebranding pointing up the importance of the civil airliner business in the world market.

“It’s always political,” the source said. Without that political backing, a military program will not see the light of day.

Politics drove the choice of four European motor companies supplying a costly A400M engine rather than buying a Pratt & Whitney Canada motor off the shelf.

Political choices has split the European market with two European fighter jets, namely competition between the UK Tempest and the next generation fighter from the Franco-German-Spanish partnership.

That will lead to “20 years work and a black eye” for European industry, the source said.

It was a socialist administration under the then French prime minister Lionel Jospin which approved the merger of Aerospatiale with Matra, leading to privatization of the former.

There is a lack of strategic vision, the source said, pointing to Airbus missing opportunities to team with Lockheed Martin to work on a successor to the C-130 and A400M, and partnering with Sikorsky or Bell Helicopter.

Exports also rely on political support. There is strict oversight by the German Bundestag parliament, while the French control falls under an interministerial committee, the commission interministérielle pour l’étude des exportations de matériels de guerre (CIEEMG). The French parliament has little to say on arms exports, in contrast to the German parliamentary supervision.

Those foreign sales are seen as needed to provide a financial return on heavy investment, requiring a green light from the French, German and Spanish authorities. That makes an already political process even more so.

Dassault made clear the political significance of Poland opting for the F-16 after the Soviet Union collapsed, leaving the French Mirage 2000 fighter on the shelf. Warsaw’s ties with Washington outweighed those to European allies.

Meanwhile, British commitment could be seen in the March 22 announcement of more than £2 billion funding over four years on the British future combat air system, which seeks to fly a mix of crewed Tempest fighter jets and uncrewed loyal wingmen drones.

The Eurofighter Typhoon will be upgraded with the Spear capability 3 air-to-ground missile and an active electronically scanned array radar.

Those were among measures which sought the “Royal Air Force to be among the most technologically innovative, productive and lethal air forces in the world,” the defense ministry said in a report titled Defense in a Competitive Age.

A cultural strain on Franco-German cooperation can be seen in French media reporting.

La Tribune, a business website, carried an op ed on March 1 pointing up problems of working with Germany on the new fighter, particularly the prospect of building a German demonstrator with the Eurofighter, and concluding it was better for Paris to partner with London on the Tempest than to cooperate with Berlin.

Germany is ready to drop a planned €5.5 billion modernization of the Tiger helicopter to Mk3 standard, and opt for the Apache AH-64E, La Tribune reported March 15.

There is also U.S. official clearance for the sale of five P-8A Poseidon maritime patrol aircraft, worth an estimated $1.77 billion, which interests the German navy. That US option is seen in France as undermining a planned Franco-German project for a maritime airborne warfare system to replace the German P-3 Orion and French ATL2 aircraft fleets.

There is also reported strain on the French stake in the bilateral project for a main ground combat system, consisting of a heavy tank and manned and unmanned vehicles, to replace the German Leopard 2 and French Leclerc tanks.

Nexter stands to win three work studies or “pillars” on the MGCS, while German partners Krauss-Maffei Wegmann and Rheinmetall will each have three pillars.

That minority stake for the French partner calls into question a previous announcement that work shares in the MGCS system architecture definition study-part 1 would be shared  equally between France and Germany on a 50-50 basis.

In the end, there will perhaps be more prime contractorship than Airbus wanted, and less than  Dassault sought, the second source said. “It is a question of process.”

There really is no plan B for the new fighter, or if there is, it is highly theoretical, the first source said.  “A solution will be found. If not, then what?

“This is a big project, with much at stake in economic, political and industrial terms,” the source said. “A good compromise needs to be found.”

That spirit of compromise will be needed to extend the cooperation signalled by that photo of the French and German heads of state, standing hand in hand.