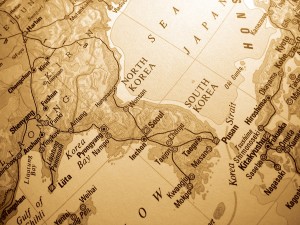 With the kind of authoritarian powers against which we are competing, the old strategies need to be re-examined.

And assumptions made about armed conventional conflict against nuclear powers carefully looked at as well.

No area of the world is this more true than in the Korean peninsula, where the options for the United States in dealing with a nuclear North Korea has for all intents and purposes taken any thought of a long conventional operational deterrence simply off of the table.

In this three part series, I will examine how that situation has changed and how the United States can best contribute to deterrence going forward in the Korean Peninsula.

The crisis management aspect of South Korean defense has grown in importance as North Korea continues down its nuclear force path, and South Korean conventional defense has become largely a national solution set.

The two developments have significant consequences for the United States.

With the natural progression of conventional defense in the hands of the Republic of Korea, the U.S. ground forces are no longer the core force for fighting a large-scale conventional war.

And for the North Korean regime, nuclear weapons play a key role for guaranteeing regime survival in the face of a significant move towards large scale conflict.

And the threat to use is a key element of a policy designed to shape outcomes favorable to North Korea in case of significant conflict.

As Paul Bracken has put it in a recent discussion: “The core threat to the United States in the Korean Peninsula, both for deterrence and operations, has changed.

“From a ground counter attack led by US and ROK across the DMZ, we have now shifted to a need to prepare for a massive precision strike by US on NK’s nuclear weapons and staging areas in case of a significant conventional strike by North Korea against U.S. and South Korean forces.”

Put another way, it is very unlikely that a pure play large scale conventional conflict in the Korean Peninsula is realistic.

The nuclear use option would be in play rapidly in face of a major conventional force confrontation.

Or put even more bluntly, I really do not think there is an alternative to nuclear use if there is a major conventional war on the Peninsula.

That is why finding ways to enhance crisis management capabilities for South Korea supportable in practical ways by U.S. and allied military and diplomatic capabilities is crucial to shaping a way ahead.

With the North Koreans having demonstrated in the recent past their willingness to pressure South Korea in various ways on the Peninsula, and with an enhanced North Korean Special Forces insertion capability which can be used in pressure points on the perimeter of South Korea, South Korean capabilities to match such actions and to deliver crisis management checkmates is crucial.

In a 2013 meeting with my former professor, Zbig Brzezinski we discussed the North Korean challenge. I would like to go back to that discussion and highlight some of the elements in that discussion.

I had the privilege to study and work with Dr. Zbigniew Brzezinski in my time as a student and for my first research job. With Brzezinski, one is always pushed towards the “Zbig” picture.  And for me, such engagement is always an important stimulus to re-thinking one’s assumptions and re-shaping one’s intellectual tapestry.

It was no different this week, when I visited him in his office and we settled down to discuss the current Korean crisis and the way ahead to deal with the crisis.  One concern which I have had in watching both the discussions about and the policy reactions to the crisis is the implicit assumption that what is occurring now is simply a replay of what has happened earlier.  To put it simply, the historical patterns seem to be the following: North Korea saber rattles, and uses the crisis to generate a new flow of revenue from those states most threatened by the saber rattling. The North Korean crisis is establishing rules for the Second Nuclear Age. Washington clearly needs to focus on what we need to do to restore deterrence and to lay a foundation for the future.

This crisis is different. First, the North Koreans have a new leader, not necessarily engaged in following his predecessor’s pattern of behavior.

Second, North Korea has been evolving both warhead and delivery technologies, so a new crisis with new capabilities might lead to expectations of different outcomes than before.  Might nuclear threats reshape the military forces facing you in a positive way, from the perspective of the North Korean leader?

Third, Japan is different.  Japan may call their forces a self-defense force but they are becoming transformed into a “dynamic defense” force not simply willing to set back and take strikes. Fourth, South Korea and Japan might well go nuclear in response to the evolution of North Korean capabilities and lack of restraint.  With the Administration public ally committed to reductions in nuclear weapons and precious little focus on expanding deterrent warfighting capabilities, do Japan and South Korea want to depend on the “Battle of Benghazi” President?

It is clear that the current crisis is part of the learning process of the Second Nuclear Age as envisaged by Paul Bracken.  What those lessons are what rules of the road are being developed and we will know only when the current crisis has matured and receded in whatever manner in does so.

But for now, we can focus on what we need to do to restore deterrence and to lay a foundation for the future.   Brzezinski emphasized the need for airpower to hold at risk the artillery capabilities of North Korea threatening South Korea, as well as being able to destroy delivery capabilities and being able to hold at risk the leadership.  And he emphasized the importance of discussing with the Chinese at the highest level what we were prepared to do, and that we would not accept an outcome dictated by North Korean threats.  We might even request their help in identifying targets with regard to holding leadership at risk.

Presumably, the Chinese might well take this discussion forward in providing advice to North Korea and providing a solid dose of reality.  It is important for the North Korean leadership to understand that the United States was not going to sit idly by and be blackmailed by North Korea and, more important than words, is mobilizing the capacity to underscore the reality of this position.

What is needed is a ramp up of air and strike power integration and to build out from that integration effort over time the kind of attack and defense enterprise one will need for Pacific security and defense in the 21st century.

By deploying high-end airpower, F-22s and B-2s to start with, and better integration of the carrier strike force with high-end airpower; it will be possible to enhance the credibility of the deterrent power of an American strike force.  And crucial to this as well, will be the ability to integrate various subsurface and surface strike capabilities as well as target identification via various air-breathing and space-based means as part of an integrated strike and defense force.

This is not a slow-motion war in which ground forces are the key.  This is a fast-paced crisis in which the invasion of North Korea is not the core deterrent force; an ability to eliminate launch vehicles and to hold the leadership at risk is. The US Army is not a centerpiece of Pacific deterrence.

Have we made much progress since 2013, in force integration with South Korea, stopping a North Korean nuclear build up or the Chinese demonstrating in any way that they would assist in dealing with the nuclear threat of North Korea to the United States and South Korea?

The challenge revolves around how North Korea would leverage their nuclear weapons, and their various conventional forces to pressure South Korea. On the other hand, the continuing interest in political and financial South Korean circles to pursue reunification with North Korea limit the willingness of some in South Korea to deepen force integration with the United States or core allies engaged in South Korean defense.