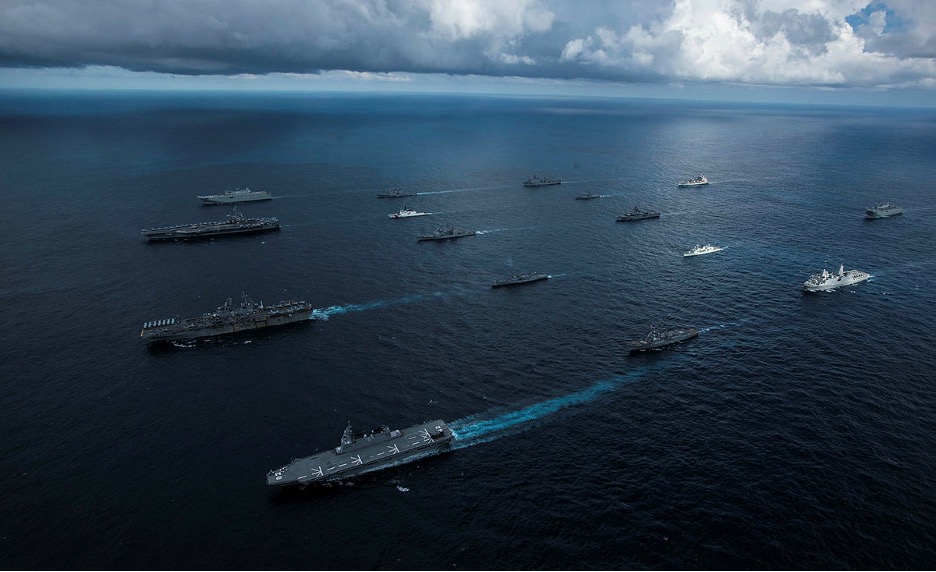 Australia has a highly capable, professional military equipped with small numbers of very complex, extremely expensive aircraft, ships, submarines and land vehicles. Australia could fight other middle powers and win, but Australia should only ever plan to be in a major conflict against a great power if we are in very good company.

The idea that Australia should have a military able to fight alone against China is deeply flawed. Fortunately, the prospects of a neatly bilateral conflict between China and Australia are remote. Australia deciding to fight alone would be an outstandingly stupid act of unilateral disarmament that discounted the value of powerful partners, notably the United States.

While our military has an impressive force, it has large vulnerabilities in being able to sustain itself in combat. It’s been slow to take up the power that comes from low-cost, semi-autonomous systems like armed drones and unmanned systems such as sensors, whether they’re in the air, under the sea or on the ground. And Australia is not taking advantage of our ‘strategic geography’ to support how our military and partner militaries can operate in times of conflict.

Addressing these gaps in a way that fits with the urgency of our darkening security environment is the best contribution Australia can make to deterring conflict in our near region and in the wider Indo-Pacific—and to being prepared if that deterrence fails.

To do this, big changes are needed in how all the ‘consumables’ of conflict are supplied. That’s highlighted in the case of advanced missiles, which Australia has only in small numbers that would be consumed rapidly. And we rely on lengthy global supply chains for resupply. Having the best missiles in your military’s ‘order of battle’ doesn’t matter if you run out of them days or weeks into a war.

Our military’s expensive manned ships, aircraft, submarines and army vehicles are also vulnerable to the new kinds of weapons that other militaries—including China’s—have in numbers and which we have so far been slow to adopt.

This is about missiles, but also the new and lethal semi-autonomous and autonomous systems that are the force multipliers for modern militaries. The Azerbaijanis used cheap but lethal armed drones to destroy Armenian tanks last year. The Iranians used them to put one of Saudi Arabia’s biggest oil refineries out of business in 2019.

In the era of low-cost lethality, our defence organisation is taking the same approach to unmanned systems and missiles that it has to manned systems such as naval ships in past decades: buying small numbers of elaborate, very expensive systems that are hard to get, slow to replace and not made here.

As examples: Defence is buying 12 armed MQ-9B Sky Guardian drones, based on the Predator used against terrorists in Iraq and Afghanistan, for around $2 billion, and four large MQ-4C Triton long-range maritime surveillance drones for $1.8–2.7 billion, and both are made offshore.

This has to change. Defence needs ‘consumable’ weapons that are able to be used, lost and replaced in large numbers during conflict if the Australian government is not going to get some very nasty surprises in a future war. That could include the loss in combat of air warfare destroyers, F-35 joint strike fighters and tanks—together with the men and women operating them. Losing one destroyer’s 180 crew in combat would be 4.5 times the casualties the Australian Defence Force suffered in the entire Afghanistan conflict.

Such sobering possible combat losses are because potential adversaries have understood the implications of advanced missiles and drones operating with their militaries’ planes, ships and submarines—and they’ve gone beyond small-scale experimentation to supplying their militaries in high volumes.

Avoiding such tragic losses will take a radical reordering of thinking for a Defence organisation that’s operated with a peacetime mindset, where ‘attrition’ is about training accidents and equipment wearing out, not brutal contact with another powerful military, where small stocks of missiles are lovingly tended and used very sparingly in training.

There are some limited but refreshing indicators of change that Defence Minister Peter Dutton can welcome and expand. Rapid development of the ‘loyal wingman’ drone to operate with the F-35 is one. So is Prime Minister Scott Morrison’s plan to manufacture in Australia at least some of the $100 billion in advanced missiles Australia’s military will buy over the next 20 years.

Buying Boeing’s large unmanned Orca submarine now would add to Australia’s undersea capability well before the launch of the first Attack-class submarine in the mid-2030s. This would add significantly to the Collins submarines’ combat power. Four Orcas would come at a fraction of a manned submarine’s cost and be in the water more than 10 years sooner.

Some of these ideas are in the government’s 2020 force structure plan, but on timelines that stretch into or even begin in the 2030s. The shift needs to happen faster and in a much bigger way to give our military considerably more firepower, and for it to be able to survive in a conflict lasting months, maybe years—not days or weeks.

That would give Australia a military force able to exert control of our territory and our near region, most logically working with partners across Southeast Asia, PNG and the South Pacific.

For this additional combat power to be effective in deterring conflict and keeping our near region strategically benign, though, Australia also needs ‘places and bases’ domestically and in our near region that our military can operate from.

Domestically, all roads lead to Darwin as an essential piece of strategic geography to be able to operate naval and air forces from. There’s focus now on how to end the lease of the Chinese port operator, but the bigger picture should be Australia investing in a major expansion of the Darwin port for the purpose of multinational naval operations in the Pacific and Indian oceans.

That fits with the US ‘global posture review’, which is looking to disperse its forces in places other than Guam, Japan and South Korea to make them more survivable in conflict with China. Our Quad partners would welcome this Australian move, which is likely to make more sense over coming years.

In our near region, if our military is going to be able to project power and deter growing Chinese presence, then the Pacific step-up needs a rethink. Right now, its defence aspect is almost a public relations campaign to make the South Pacific less likely to welcome rising Chinese military presence and access at ports, airfields and other infrastructure.

Given the darkening strategic environment, that’s not enough.

Australia needs to take advantage of our near region’s strategic geography, not just seek to deny that advantage to others. One example would be a bigger Manus Island base than planned, with Australian naval vessels based there working with Papua New Guinea’s patrol boats.

That starts with confronting but frank discussions about the emerging security environment with our Pacific island partners, making the case that enabling joint operations and activities with Australia helps bring stability, and is fundamental to regional security.

For those thinking this plan makes Australia so secure we don’t need our alliance with the US, that’s a mistake. Although the US gets considerable value from Australia as an ally, Australia gains much more from the US.

Access to US technology and intelligence, combined with our own research, intelligence and industry capabilities, gives Australia a far more powerful military than we could achieve otherwise. That’s leaving aside the likely enormous advantages through cooperation with the US in emerging areas like quantum computing, artificial intelligence, hypersonics, space and offensive cyber systems.

But can we rely on the US in the world we see emerging? The public debate on this neglects the fact that US strategy recognises its own deep need to act with allies and partners to meet the China challenge.

That judgement has been driven home by the experiences of the Trump administration, which experimented with unilateralism. President Joe Biden’s administration learned the lesson from those four years. But it’s also understood in Congress, the State Department, think-tanks and in the giant US defence organisation.

The development and use of Chinese power under an assertive Xi Jinping will reinforce this strategic understanding.

Australia invests in its own security. That means we’re not just a customer of US security but a contributor to American and global security. Closing some urgent gaps and vulnerabilities in our defence capabilities will make Australia and the world safer, and help deter future conflict.

Michael Shoebridge is director of the defence, strategy and national security program at ASPI. A version of this article was published in the Weekend Australian.