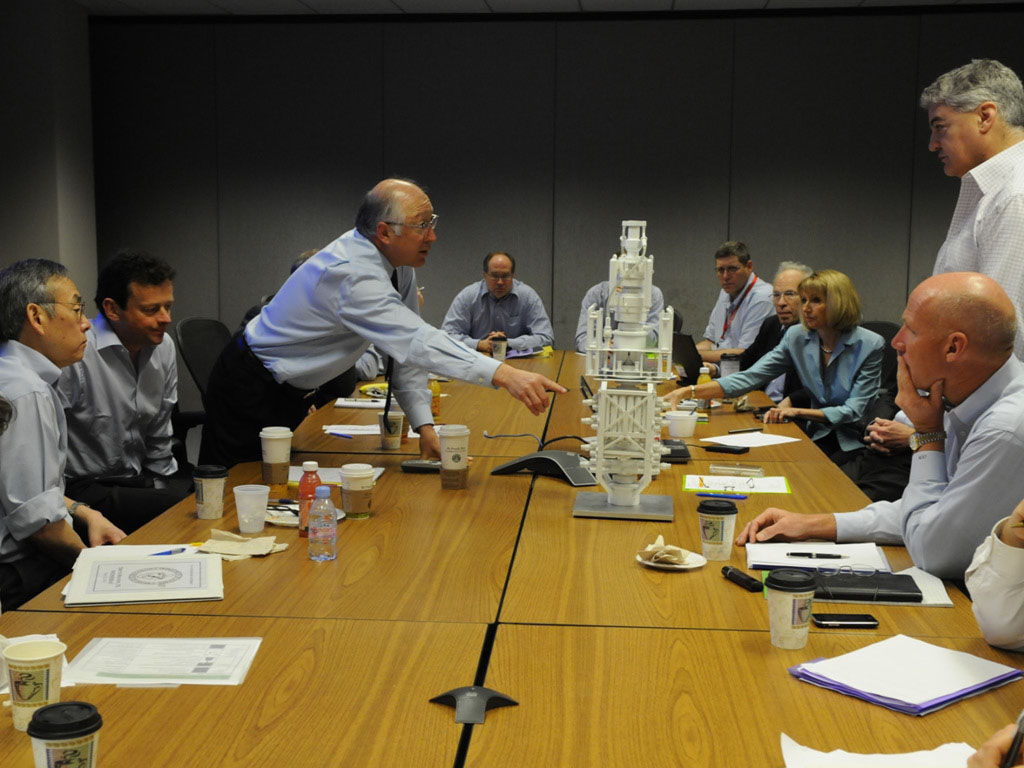 Dr. Marcia McNutt, President of the National Academy of Science recently gave the latest Michelson Lecture at the Naval Academy. The Michelson Memorial Lecture Series brings to the Naval Academy world leading scientists to share their perspectives and knowledge with the Midshipmen.

The lecture is sponsored by my class at the Naval Academy, 1969, and “commemorates the achievements of Albert A. Michelson, whose experiments on the measurement of the speed of light were initiated while he was a military instructor at the U. S. Naval Academy. These studies not only advanced the science of physics but resulted in his selection as the first Nobel Laureate in science from the United States.

“Each year since 1981, a distinguished scientist has come to the Naval Academy to present the Michelson Lecture. These scientists have represented a variety of scientific disciplines, including chemistry, physics, mathematics, oceanography, and computer science.”

This year’s presentation was especially notable on many levels. The speaker was the President of the National Academy of Sciences, Dr. Marcia McNutt. Her presentation was truly outstanding, but her personal engagement with the Midshipmen  demonstrated what a true scientist is all about – working with the younger generation to ensure that scientific progress continues.

Her lecture was entitled: Applications of Science and Technology for Strategic Advantage. This was how the lecture was described prior to its delivery: “Science and technology have always been essential to the war fighting and peace-keeping advantage of the US Navy and Marine Corps. To realize a critical operational edge, officers must know how, where, and when to apply an increasingly large and complex arsenal of innovations. At the same time, a strategic view to identify “just over the horizon” challenges helps Naval officers build mission resilience in the face of an uncertain future. The most successful officers will competently utilize the right blend of credibility, science and technology literacy, devotion to continual learning, courage to know when to take risks, and foresight to mitigate potential bad outcomes. This lecture will illustrate these skill sets and more the examples taken from a longer career of working with the Navy and Coast Guard on science and technology in the marine environment.”

She provided a sweeping historical look at how science and technology intersected with the art of warfare to shape capabilities crucial for the United States to stay ahead of its adversaries. She noted that after the battle of the Monitor and the Merrimack, President Lincoln called for the country to harness science to gain a strategic advantage. That call resounds down to today with adversaries like China and Russia focused on shaping ways to leverage their own science and technology to dominate the liberal democratic world.

In peace and war, the National Academy of Science has risen to the challenge of focusing on cutting edge science and technology trying to always keep America as the preeminent scientific research country known and respected throughout the world.  From her direct focus on the cost benefit of ever improving technology such as 21s Century underwater autonomous systems to her direct on scene leadership in abating the horrific environmental effects of the Deepwater Horizon disaster. she presented to today’s Midshipman a role model for all to always quest to achieve to the best of their ability and in doing so make a real difference.

I think what really captured the attention of many of the Midshipman was when Dr. Marcia McNutt explained how she learned to set shape charges working with Navy SEALs on San Clemente Island in order to support her own work both conceptually and practically. She demonstrated that working directly with warriors was a key part in working science and technology to support an innovative and effective way ahead to gain strategic advantage.

She then participated in the 2021 USNA Oceanography Department Virtual Capstone Day after her lecture. Having the President of the National Academy of Science who is a truly brilliant and highly accomplished geophysicist discuss research performed by Midshipman in the Naval Academy Oceanography program is a unique moment in Academy learning.

Her presence and presentation provided the Midshipman with a chance to see what a leader in science all is about. How they think, how they work, and how the engage in the right kind of teamwork. She also emphasized the ethical side of the equation and warned the Midshipman that protecting one’s reputation was part of surviving and thriving in the social media age.

In short, Dr. Marcia McNutt added a significant chapter to the learning which Midshipman have received as a result of the Michelson Memorial Lecture Series.


Appendix: Lessons from a Crisis

Molly Galvin published on April 20, 2020, a story about the Deepwater Horizon crisis which looked back at the crisis from the perspective of the NAS President Marcia McNutt.

One of the worst environmental disasters in U.S. history was set in motion 10 years ago with the explosion of the Deepwater Horizon oil rig in the Gulf of Mexico.  The explosion was triggered a mile below the ocean’s surface, when BP’s exploratory Macondo well had blown. By the time the well was capped 87 days later, an estimated 4 million barrels of oil had gushed into the Gulf.

On the 10th anniversary of that disaster, which killed 11 workers and wreaked environmental havoc, the nation and the world are now wholly consumed by another emergency – the COVID-19 pandemic.  Although the two crises are very different in size, scope, and scale, there are some important parallels, says National Academy of Sciences President Marcia McNutt.

As the director of the U.S. Geological Survey in 2010, McNutt played a pivotal role in leading the federal response to Deepwater Horizon.  She temporarily relocated to Houston for three months, leading a team of government scientists who worked under intense pressure alongside industry researchers — often around the clock, and under near constant scrutiny from the national media — to develop science-based solutions to an unprecedented disaster.

“What’s common to almost every disaster is that it starts out with you not really grasping the true magnitude,” she says.  “With COVID-19 it started out as ‘[people are getting a mysterious illness] in China.’  With Deepwater Horizon it started out as ‘an oil rig is on fire.’ And then it just expands and explodes into these all-encompassing crises. In both cases – the Deepwater Horizon disaster and this current pandemic, you’re dealing with never-before-seen problems.”

For policymakers and experts on the front lines of any crisis, one of the most difficult issues they encounter is trying to make decisions when there are so many unknowns, and there is little information or data available.  What’s more, disasters don’t recognize boundaries – whether they are geographic, political, or disciplinary.

“In the case of Deepwater Horizon, it was a regional disaster rather than a global disaster.  And not as many lives were on the line, but the consequences for the environment and for the long-term recovery of the fishing industry, tourism industry, and the oil industry were significant.”

Although there were competing interests to balance, all of the entities involved – including federal and state officials, industry executives, environmental advocates, and researchers were united by a common goal.

“Everybody wanted this to go away as quickly as possible.  And everyone understood it was also a very complex problem.”

Keeping all of the stakeholders regularly informed is key to building trust and moving forward, says McNutt. “We’ve already seen some of the breakdowns in [the COVID-19 response] when communication hasn’t been clear and hasn’t been consistent, and the problems that causes.”

Also essential to finding solutions is bringing together diverse perspectives and multidimensional talent and expertise.  Before government scientists got more involved, for instance, BP had tried a number of failed solutions, such as employing a containment dome to cap the well, and “top kill,” a technique that involves forcing heavy mud into the well to shut down the oil flow.

“I think that was the most difficult juncture,” says McNutt.  “There was this call from many in the federal government that BP should move aside, and that the government should take over attempts to control the well.  But the government scientists argued that without BP’s expertise in well intervention, there really was no hope to try to control this.  That viewpoint then won the day, and we started working as a team with BP.  That led to the successful containment and finally the capping stack that stopped the oil release….”

Featured Photo: At the BP Command Center in Houston, May 12, 2010, Marcia McNutt meets with secretaries Salazar and Chu, DOE and national lab staff, industry officials, and other engineers and scientists involved in finding solutions to cap the flow of oil and contain the spill.