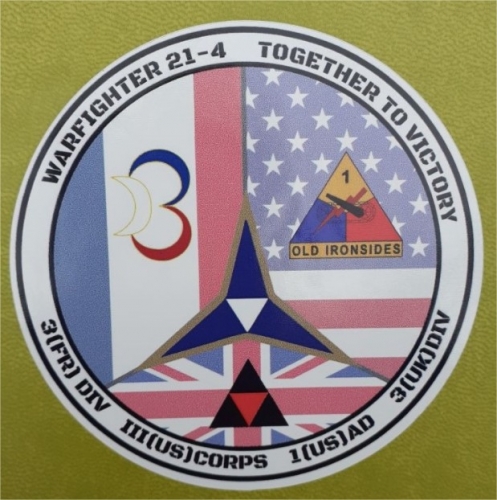 Warfighter is an annual U.S. Army exercise designed to test tactical command at the Corps level in a high intensity warfighting scenario.

This year it ran for a period of 10 days and 9 nights, Fort Hood-based III Corps was tasked to incorporate divisional headquarters from the US, the UK and France.

For the U.S. to invite two of its closest allies to deploy thousands of troops, 1,350 from the British Army and 1,000 from the French Army, to American soil in the midst of a pandemic was a bold decision.

A total of 3,000 troops (about half players and half in support) participated across four bases – Fort Hood and Fort Bliss in Texas, Fort Bragg in North Carolina and Grafenwoehr in Germany – creating an AOR (Area of Responsibility) the size of Europe.

The idea to some extent has its origins in the signing of a Strategic Vision Statement (SVS) between the U.S. and the British Chiefs of Army in 2014 (Revised in 2016 and again in 2020) and the US and the French Chiefs in 2015. These SVS all expressed ambitions to develop deeper interoperability between each other’s armies.

The first Warfighter involving the British Army and the US Army took place in 2017. The 2021 edition was therefore the fourth turn of the wheel for the British Army who very much welcomed the addition of France to the order of battle.

This year was therefore the first time that these three traditional allies – who pride themselves on a similar warrior ethos – trained as they would fight against a robust peer enemy.

Warfighter exercises are ‘’theater agnostic;’’ i.e. the scenarios could involve the Euro-Atlantic or the Indo-Pacific. But in either case, the three participating nations share similar interests and military threat perceptions.

WFX 21-4 has played a critical part in the British Army’s plans to restructure and reequip to meet future challenges.

Brig Paul Tennant, the British Military Attache in Washington, explains ‘with the drawdown from Iraq and Afghanistan, there was an urgent need to reinvest in this kind of training. There is a free good in the collaboration of three significant NATO military allies in an exercise at this scale against a notional peer competitor. It is axiomatic that it is better to fight with allies than without them.’

As the United Kingdom’s recent Defence Command Paper states ‘we will maintain well supported and equipped nuclear and conventional forces, at high readiness, across all domains, capable of high intensity warfighting. We will design our warfighting forces to be integrated with allies…’

This has led the French Army Chief of Staff, General Thierry Burkhard, to call for a hardened Army  and a new strategic vision called ‘’Operational Superiority 2030’’.Now is the time to ‘re-learn the grammar of high intensity conflict’, he advocated recently.

‘The scenario for WFX 21-4 was meant to enact the full spectrum of capabilities our three high tech armies are able to deploy in order to implement an early entry operation to stabilize a partner nation being invaded by a major power in Europe, and holding it till NATO reinforcement arrives’, explains Col Remi Bouzereau, the French Military Attache in Washington.

Such a scenario has obvious utility in the light of the recent establishment of the US V Corps Forward Headquarters in Poland.

Interoperability is defined as ‘’a common language to fight according to shared procedures adapted to the context’.’

Both Brig Tennant and Col Bouzereau were impressed not only by the ability of American Army couterparts to organize such a large-scale multinational exercise, but also by ‘’the unprecedented amount of lessons all 3 international components learned from the experience’’.

The benefits of such an exercise are two-fold :

The full spectrum of capabilities were deployed and tested in the 10-day drill.

In the case of the British forces, Brig Tennant said ‘’our detachment reflected a full divisional order of battle which consisted of a Divisional Reconnaissance Battlegroup and a total of 4 brigades (one of which was US) with 1 Division Artillery Group, 1 Air Manoeuvre Battlegroup, 1 Combat Aviation Brigade, 1 Signals Brigade, 1 Logistic Brigade, 1 Information Manoeuvre Group, 1 Divisional Engineering Group and 1 Hospital Treatment Group. The presence of a divisional reconnaissance group and an information manoeuvre group were especially focussed on the future, reflecting many of the capabilities for which the British Army is planning to restructure.’

Agility is also what Col Bouzereau emphasized in terms of lessons learned, pointing out that the 3rd French Division had just returned from a deployment in Sahel and was able to shift quickly from COIN to high intensity warfare.

Both agreed that the areas where there is room for further development, in particular in the non-kinetic space. ‘

’These ‘’soft’’ components were not as accessible in the past 12 to 15 years when we were so busy in the Middle-East ; for example, there is a real drive to invest in areas such as EWSI (Electronic Warfare and Signals Intelligence)’’, explains Brig Tennant.

Ever since the first Gulf war, the three countries have worked hard to communicate, but the connection of networks is highly complex.

The success of Warfighter 21-4 owes much to the contributions of the respective signals staff and the U.S .Army Digital Liaison Detachment – without whom communications would have been even more challenging.

And the Force Health Protection measures taken by all sides achieved truly remarkable success in minimizing the impact of COVID on the outcomes.

For the UK MoD recent white paper on defence, see the report found below:

For the French Army Chief of Staff’s focus on the way ahead, see the following:

For an earlier version of this article published by Breaking Defense, see the following: