At the April 8, 2021, Williams Foundation Seminar on Next Generation Autonomous Systems, CDRE Michael Turner, Director General of Force Exploration at the Australian Department of Defence, provided an overview on how to conceptualize the way ahead for the ADF and its force development as it adapts to remote autonomous systems.

As Director General Force Exploration, CDR Turner reports to Vice Chief of the Defence Force (VCDF) Vice Admiral David Johnston, who is responsible for joint force integration, interoperability, designing the future force, preparedness and military strategy in his role as the Joint Force Authority. The Joint Force Authority is responsible for ensuring the current and future joint force meets the capability requirements directed by Government and preparedness requirements directed by Chief of the Defence Force (CDF).

“Force exploration branch shapes the future of the Australian defense force by identifying changing trends, and conditions that can become capabilities that provide us with advantage. We do this by seeking to understand the future environment and providing a concept driven pathway to compelling future force options that generate and sustain military advantage out to 2040, and beyond. It’s clear that robotics and autonomous systems will have a disruptive influence in the future operating environment.”

He underscored that the force exploration branch released a report in December 2020 which identified how the ADF can “generate military power using robotics and autonomous systems.”

That report was built around the core concept that the autonomy and the artificial intelligence techniques that enable it should be understood from the standpoint of “the convergence of a broad range of technologies, some much more mature than others.

“These technologies include, power generation and energy storage, computation, swarming technology, advanced materials, nano explosives, biometrics, additive manufacturing, sensors and perception, and common control architecture, to name the key components. These technologies need to be harnessed and integrated to provide a reliable and effective capability.”

He did so by placing these systems on two axis of development. The first context is the technical one or how they worked; the second was the control context or how we use them. 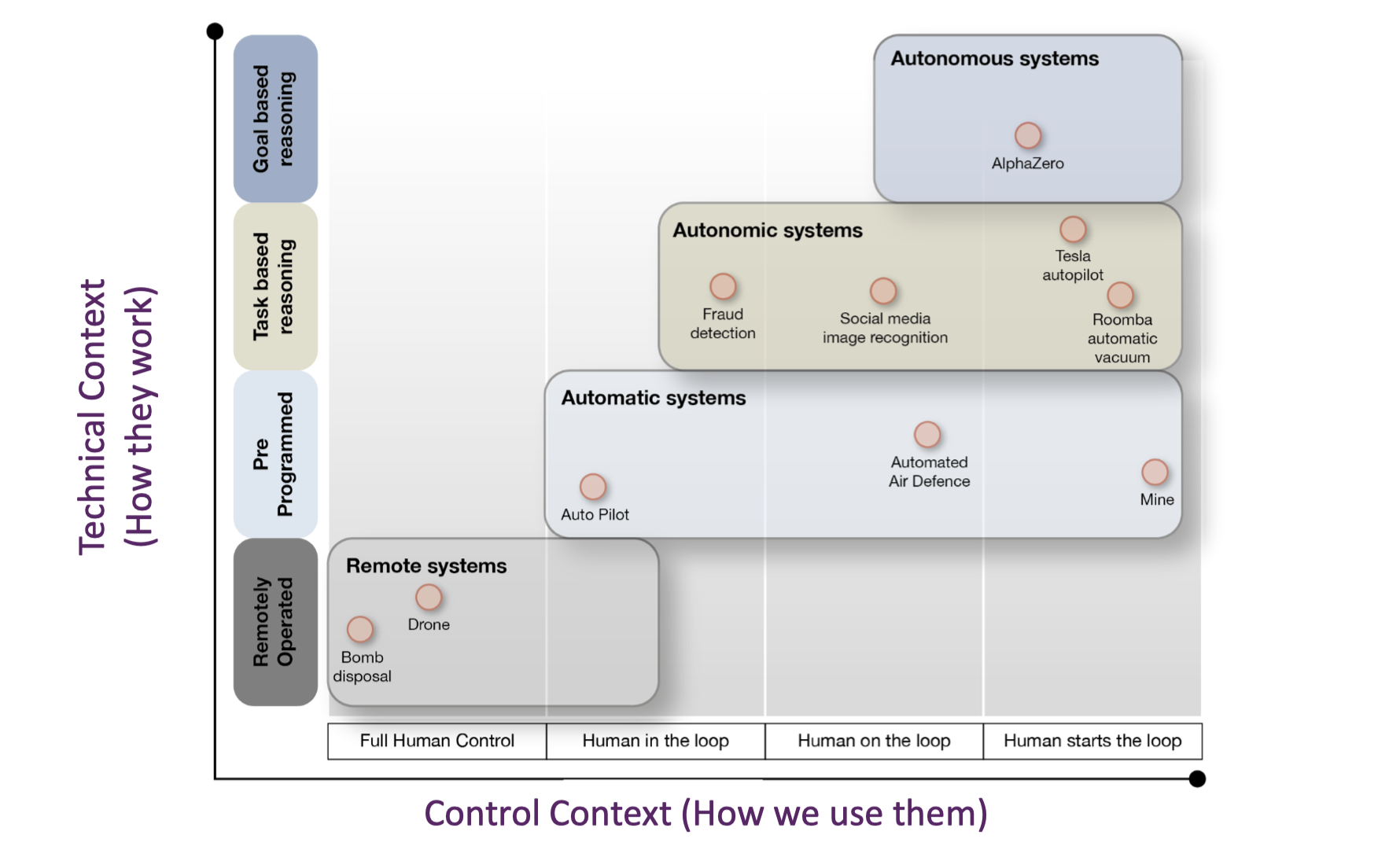 The first category are remote systems.

These systems are those operated by humans via remote methods. They are already in service or being introduced into service, such as a bomb disposal remotely operated system.

The second category are automatic systems, which are preprogrammed to act in a deterministic manner.

For example, “if a target is detected heading towards the ship faster than a certain speed and with a certain range, the system will engage it. A human operator may adjust the programming, but such a system will not improve its own behavior based on experience, these systems have been used by the ADF for many years.”

The third category are autonomic systems, such as the Aegis combat system.

“Autonomic systems achieve human defined tasks by operating with reference to a set of predefined guidelines, respond to stimuli in a probabilistic manner. For example, an image recognition system is provided with the signatures of enemy vehicles…. A human operator can monitor the system to confirm that assessments are correct and provide more signature data to knowledge base. As the data grows, the system can improve its important performance of this task.”

The fourth category are “truly autonomous systems that can learn from their data and their own processing to determine the tasks necessary to achieve a human defined goal.”

And he added: “An example of a fully autonomous system may not yet exist.”

With regard to future force capabilities, CDR Turner argues that “the autonomic and autonomous systems that will generate the greatest disruption systems that can perform tasks not suited to deterministic behaviors and can develop novel tasks and approaches to new tasks.

With regard to the longer-term future for the ADF, as autonomous capabilities become available, he argued that new approaches to shaping platforms will be required. 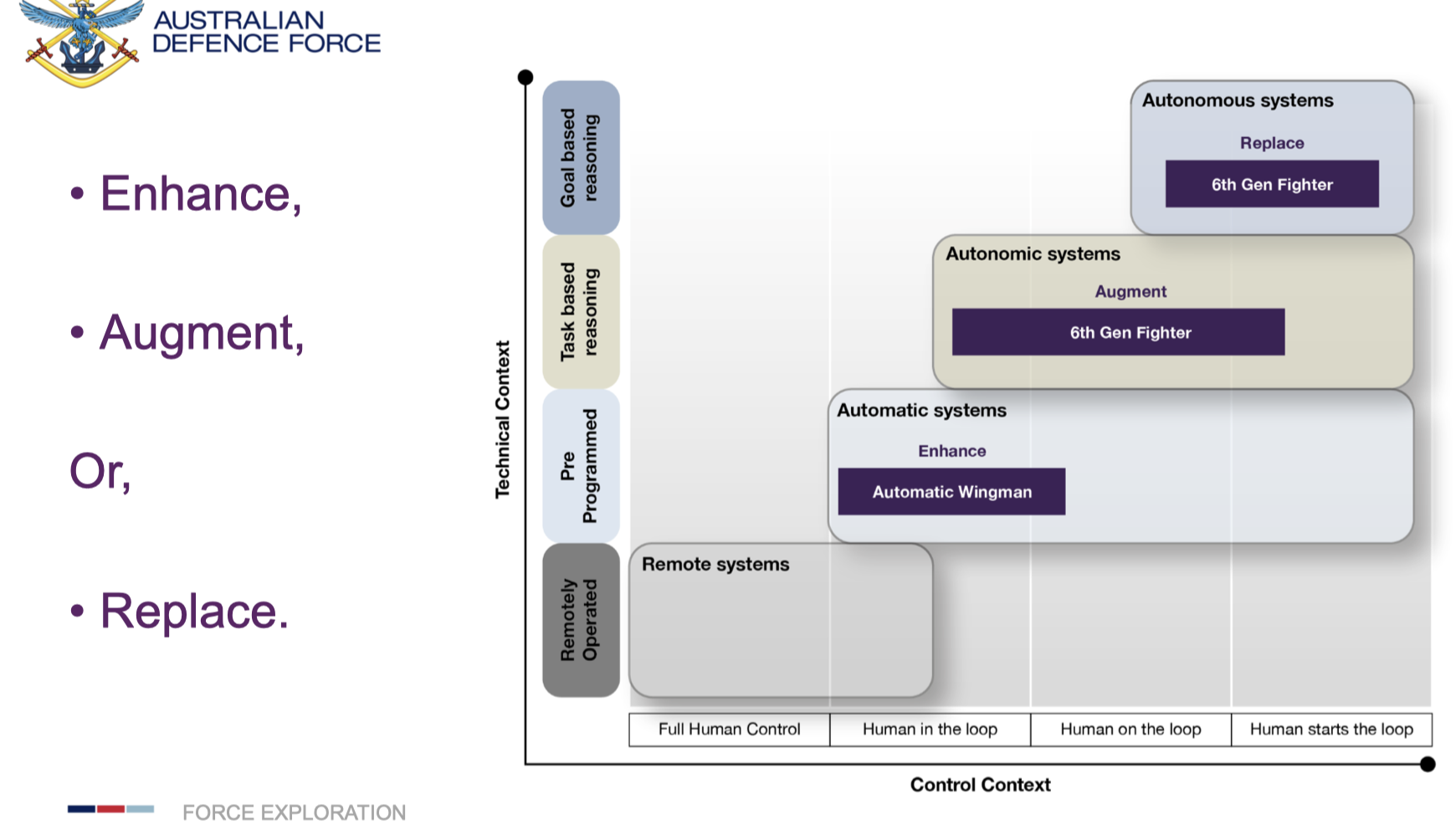 “Does this mean that we’re looking to design a future force that contains autonomous F-35s, autonomous M1s, and autonomous DDGs? Adding autonomy to these platforms will certainly be part of their lifecycle upgrades, but we will not be able to take full advantage of autonomy if we do not consider how other technologies will converge into platforms that are designed from the outset to operate with less human input. These future platforms will be fast, accurate, stealthy and persistent in applications, not currently able to achieve such characteristics.”

Underlying this projected transition is the question of data and its exploitation by the fifth generation evolving force.

He did not put it this way, but it makes sense to focus on how C2 and information generated by Information, Surveillance and Reconnaissance systems are evolving within the context of force development now and in the mid-term.

The question is about the reliability of data and information and the trust which warfighters can place on data at the tactical edge as well as in providing for accurate tactical or strategic area wide decision making.

One could argue that the priority being given to shaping effective mission command for the integration of a distributed force already being shaped with the new generation of platforms, such as F-35s, P-8s and Tritons, lays a foundation for a way ahead.

As CDR Turner put it: “With the foundations of data trust and command control in place, we can design capabilities to exploit autonomy by enhancing current capabilities, augmenting planned capabilities and replacing legacy systems with RAS.”

He argued as did other speakers at the seminar that for the ADF enhancing the mass of the force to be able to operate over the distances challenging ADF operations was a key advantage of crafting autonomous systems capabilities which can be integrated into ADF concepts of operations.

“Autonomous systems are asked to increase their mass while even employing them in forward roles, or employing autonomy in roles that allow us to optimize our workforce.  An autonomous Wingman is an example of a system that increases our mass forward, while autonomous resupply vehicles would free up personnel for other roles.

“Autonomy has the potential to achieve decision advantage and increase, not just the speed, which we can complete the decision-making cycle, but also improve the quality of decisions. Autonomous surveillance, data processing and decision support will allow commanders to understand and act upon battle spaces of increasing complexity and respond to adversaries also operating at machine speed. Autonomous systems will be part of the targeting process…”

But as CDR Turner put it earlier in his presentation: “An example of a fully autonomous system may not yet exist.” What does exist if the transformation underway with regard to building out a fifth-generation force, one in which distributed forces and innovative task forcing is reshaping how the ADF operates. And that force redesign being worked in the operational force can provide the foundation for shaping a way ahead within which autonomous systems can provide ways to enhance, augment or replace platforms operating within the force.

And the presentation which followed that of CDR Turner, by Professor Jason Scholz provided further insight into how this transition might work.

For a PDF version of the December 2020 report, see below:

For an e-book version of the December 202 report, see below: