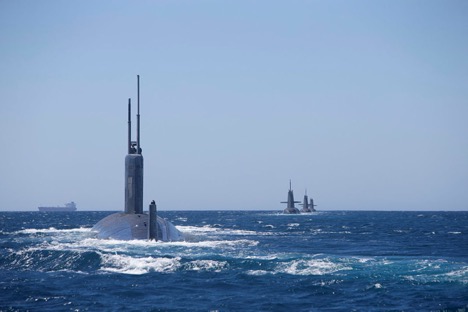 American officials have stressed the importance of Australia having nuclear-powered submarines that are fast, discreet, with extremely long range and able to operate closely with their own undersea fleet.

That’s a remarkable turnround in the very few years since United States representatives consistently declared that their naval nuclear technology would not be shared even with as close an ally as Australia.

In a White House briefing, two unnamed senior administration officials have provided detail behind the creation of a new trilateral security partnership—AUKUS—involving the US, United Kingdom and Australia as maritime nations focused on the Indo-Pacific region.

The first initiative of AUKUS would be to ‘support Australia’s desire to acquire nuclear-powered submarines’, they said. That would start with an 18-month effort by technical, strategic and navy teams from all three countries to work out how this can be done.

The decision followed months of high-level negotiations carried out in secrecy, the officials said, and would mark the biggest strategic step that Australia had taken in generations.

‘This allows Australia to play at a much higher level and to augment American capabilities that will be similar. And this is about maintaining peace and stability in the Indo-Pacific.’

The officials added that ‘Australia has basically indicated that they want to ensure that they’re playing a strategic role in that overall effort.’

They said the deal was ‘huge’ in Australia and negotiations were carried out with a high degree of discretion. Regional leaders were only now being briefed.

Nuclear-powered submarines were stealthier, faster, more manoeuvrable and more likely to survive in combat. And they had much greater range. Conventionally powered submarines had to run near the surface regularly to recharge their batteries and their range was limited.

The U.S. had only shared this kind of nuclear technology once before, the officials said. That was with the UK and it was in 1958.

‘One of the reasons why we’ve done this with Australia, with Great Britain, is because of the experience, lessons learned and history associated with this program, which will be extremely valuable in the engagement with Australia.’

The officials said such a technology transfer was unlikely to happen again. ‘This technology is extremely sensitive. This is, frankly, an exception to our policy in many respects. I do not anticipate that this will be undertaken in other circumstances going forward. We view this as a one-off.’

They stressed that the process of equipping the Royal Australian Navy with nuclear submarines would be both challenging and important. ‘Australia does not have a nuclear domestic infrastructure. They’ve made a major commitment to go in this direction. This will be a sustained effort over years.

‘And everything that we’ve seen from Australia indicates that they’re determined to proceed on this course, and we have high confidence, complete confidence, that they will be effective in this pursuit.’

Because nuclear submarines were much more capable than conventionally powered boats, ‘they will allow us to sustain and to improve deterrence across the Indo-Pacific. As part of that, we will work closely on efforts to ensure the best practices with respect to nuclear stewardship. I think you will see much deeper interoperability among our navies and our nuclear infrastructure people to ensure that our countries are working very closely together.’

This decision would bind Australia to the U.S. and the UK decisively for generations.

U.S. President Joe Biden’s administration remained deeply committed to American leadership and nuclear non-proliferation, the officials said. ‘This is nuclear propulsion. Australia has no intention of pursuing nuclear weapons. And Australia is, in fact, a leader in all non-proliferation efforts in the [Non-Proliferation Treaty] and elsewhere.’

The officials said this partnership was, in many ways, possible because of Australia’s longstanding and demonstrated commitment to nuclear non-proliferation.

They noted that this was a historic development.

‘It reflects the Biden administration’s determination to build stronger partnerships to sustain peace and stability across the entire Indo-Pacific region,’ one said. ‘This new architecture is really about deepening cooperation on a range of defence capabilities for the 21st century.’

They said this new alignment was intended to pursue deeper interoperability and to spur cooperation across many new and emerging arenas such as cyber, artificial intelligence and particularly applied AI, quantum technologies, and ‘some undersea capabilities as well’.

There’d be a strong focus on increasing information- and technology-sharing with a much more dedicated effort to pursue integration of security- and defence-related science, technology and industrial bases and supply chains. ‘This will be a sustained effort over many years to see how we can marry and merge some of our independent and individual capabilities into greater trilateral engagement as we go forward.’

That would be take place alongside the development of stronger US bilateral partnerships with nations including Japan, South Korea, Thailand and the Philippines—and stronger engagement with new partners like India and Vietnam, and new formations like the Quad.

‘This is designed not only to strengthen our capabilities in the Indo-Pacific but to link Europe, and particularly Great Britain, more closely with our strategic pursuits in the region as a whole.

‘Great Britain is very focused on the concept of “global Britain,” and their tilt is about engaging much more deeply with the Indo-Pacific, and this is a down payment on that effort.’

The officials said that for decades the US had secured peace and stability in the Indo-Pacific. ‘I think it’d be fair to say, over the last several years, there have been questions: Does the United States still have the stomach?’ one said.

‘What president Biden is saying with this initiative is: “Count us in. We are all in for a deeper, sustained commitment to the Indo-Pacific, and we recognise that one of our critical roles is indeed the maintenance of peace and stability there.’

This article was published by ASPI on September 16, 2021.