In a very interesting presentation this week sponsored by our colleagues in Bahrain, the question of whether a return to the 2015 Iranian deal was in the cards.

Although a simple point, the flood of literature on the potential Obama III Administration seems to ignore the fundamental shift of the past five years.

And simply writing pieces highlighting Trump’s purported role in these changes largely misses the point of how much strategic change has occurred not driven by the United States.

The main speaker and the host were as follows for the presentation held on December 9, 2020: 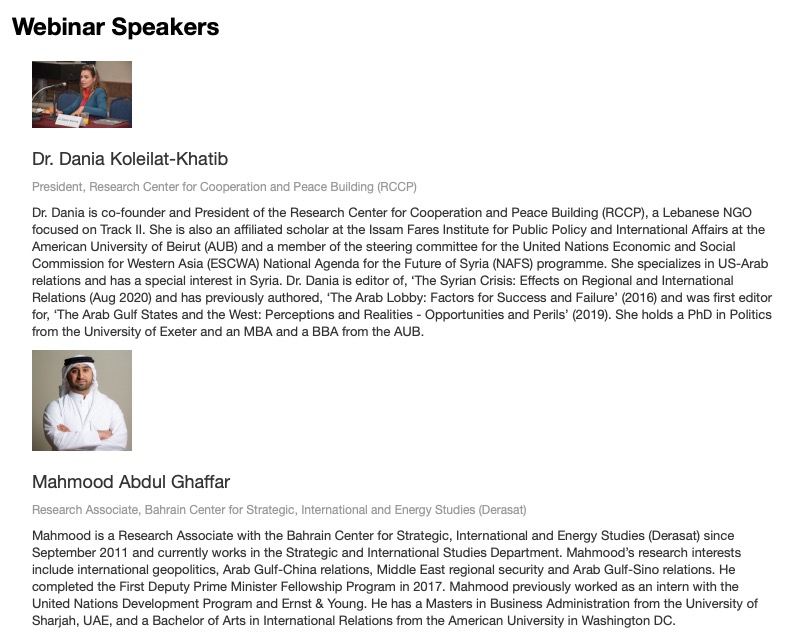 The opposition of the GCC states to the Obama executive agreement was profound and significant. And although American analysts largely embraced the agreement as a way to defer Iranian acquisition of nuclear weapons, my own discussions with GCC officials underscored how they believed that the agreement really did no such thing.

Dr. Koleilat-Khatib highlighted in her presentation why she believed the agreement was flawed and with it the Obama Administration’s logic in negotiating the agreement. She argued that there was a fundamental flaw in logic. The assumpation was that economic incentives would drive regime change and with regime change the nuclear problem would largely go away.

She argued that this largely ignored how ideological the regime is and the role of their surrogates in the region undercutting broader security for the GCC states.

The video can be watched to get her approach to what she believes is a way ahead in 2021.

I would note that if the GCC wants to influence any U.S. policy process going forward in 2021, they should certainly not be as quiescent as they were when Obama shaped his approach.

This approach was based on the concept, as Obama clearly stated, that the GCC needed to recognize Iran’s role and share responsibility for Gulf security.

My only criticism of the discussion was that it did not focus as much as I think makes sense to with regard to the impact of the Abraham Accords.

Iran’s regime is not focused on security and stability in the Gulf; and their role in supporting, animating and arming surrogates in the region is not simply a point for discussion.

It is a threat which needs to be dealt with directly.

And I believe that the Abraham accords provides for some new ways to do so.

Further, I think the question of the role of Russia, the United States, China and Europe is a key one playing out in a region, where the United States can no longer be expected to play an outsized role in the region.