If you wanted to sum up America’s (and its allies’) military-strategic posture towards China in Asia today in a sentence, you’d say that we aim to deter China from using force in situations like Taiwan by the threat of a full-scale military response. So it’s worth asking whether we’re really doing enough to deter China.

We can illuminate this a little by looking at Europe. In 2016, after Russia annexed Crimea and invaded other parts of Ukraine, the North Atlantic Treaty Organisation (NATO) feared that some of its members—the Baltic states or even Poland—might be next. It responded by deploying multinational combat formations to these frontline member states. This ‘enhanced forward presence’ (EFP) consists of four battalion-sized ‘battle groups’, one in each of the Baltic states and Poland, composed of contingents from a total of 20 different NATO member states.

In NATO circles the EFP is seen as a big deal, because it is believed to show the alliance’s resolve to resist with armed force any Russian military move against these new member states. This is thought to be an effective deterrent. 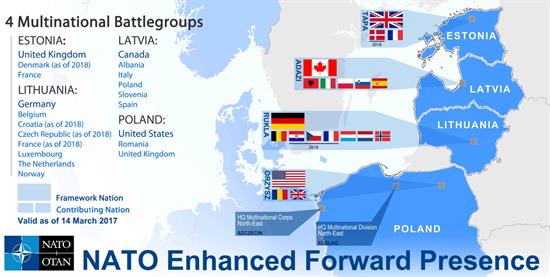 Of course, these tiny forces are not expected to stop or even slow a Russian advance. Though NATO is reluctant to use the term, they are a classic tripwire. Ensuring that allied forces are engaged by the Russians at the start of any incursion is supposed to make a full-scale NATO military response inevitable. Moscow is expected to calculate that no NATO member could stand back once its own forces had been attacked. That is why so many member states are represented.

But is that right? Does the EFP tripwire do much to strengthen Moscow’s expectations that an attack on Latvia, for example, would mean war with NATO? It’s easy to assume that any NATO member would find it hard to refrain from contributing to a full-scale military response once its own forces had been engaged, and soldiers killed. Both domestic and international pressures would be intense.

However, things might not play out that way. Much depends on what happens on the battlefield. The pressure on NATO to escalate would indeed be intense if an EFP battalion was rolled over and crushed with many casualties. But things would be different if the Russians were smart enough to encircle the NATO units without doing much damage to them, and then invite them to surrender, offering to send them home with their tails between their legs.

This is not an unlikely outcome, when a single battalion faces multiple divisions. Would NATO member governments then order their forces to fight on against hopeless odds, or would they meekly accept Moscow’s offer? And how much resolve for an escalating fight would they have then? So here is one problem with the EFP: the forces are too small to guarantee the kind of fight that would compel NATO to escalate.

But there’s a bigger problem too. Imagine that an EFP battalion does get into a serious fight with Russian forces, and takes many casualties. Everyone in NATO agrees that a major military response is required. What would they do?

There seems little doubt that Russian forces could quickly seize control of one of the Baltic states or a sizable chunk of its territory, so the only meaningful NATO response would be a major military operation to expel them. That would be a huge and costly business—by far the largest land operations undertaken anywhere in Europe since World War II.

Massive forces would need to be deployed long distances—including, presumably, large US forces across the Atlantic—and would need to be protected as they did so. Russian airpower would have to be neutralised with a sustained campaign of strikes on targets within Russian territory, to which Russia would be sure to retaliate. And then a major land campaign would need to be undertaken. In all this, the risk of nuclear escalation would be very real.

How credible is it that NATO would take this on, at massive cost and risk, to push the Russians out of Latvia, for example? That’s the key question, because what will deter Moscow, if anything does, isn’t the presence of the EFP tripwire itself, but the military campaign that it believes NATO would launch if the tripwire were crossed.

Therefore, in addition to the tripwire, NATO needs to conceive, plan and exercise a credible full-scale campaign to expel Russian forces from frontline NATO member states. Unless Russia can see that NATO has a credible plan for such a campaign, it is unlikely to be deterred. It is more likely to conclude that, faced with a Russian fait accompli, NATO would talk tough but do little.

Moreover, Moscow would need to be persuaded not just that NATO had a plan, but that its members were willing to implement it. There would need to be a clear and evident consensus among NATO members and their voters that they would be willing to bear the costs and risks of a major war to rescue Latvia from the Russians.

Building that consensus will not be easy. It won’t be enough to appeal to abstract principles of international law or the sanctity of Article 5 of the NATO Treaty. It will be necessary to explain why other NATO members’ security depends on recovering Latvia, rather than stopping Russia from advancing further west and south. It’s not clear how that argument could be made.

Without this, the EFP tripwire looks a very feeble deterrent. Indeed, it risks becoming the opposite of a deterrent. Instead of displaying NATO’s strength and resolve, it demonstrates just how far the alliance was weakened when it was extended into the territory of the former Soviet Union itself.

This brings us back to Asia. We readily assume that the US and its Asian allies can deter China from attacking Taiwan, for example. But there’s no credible campaign plan which would convince Beijing that Washington and its partners could intervene effectively, or that they would be willing to pay the costs of such a campaign even if they had a plan. Without those, China doesn’t face much of a deterrent.

Hugh White is professor of strategic studies at the Australian National University.

This article first appeared on ASPI’s The Strategist on 26 June 2018 and is republished here with the kind permission of The Strategist’s editors.