That is, they could be anyone who chooses to serve their country through the application of military power in support of the Australian government’s objectives.

What Monash, Scherger, and the archetypal computer hacker have in common is the power of imagination.

Monash — an outsider — understood the application of combined arms warfare, a revolutionary concept in 1918, instinctively.

Scherger — an outsider — understood the application of flexibility in aircraft combined with mission design, developing a concept during the Second World War of multirole aircraft, and grasping the requirement for the RAAF to embrace technological change and integrate within a coalition.

The computer hacker — an outsider — understands how networks function and can creatively identify weak points within those networks inherently.

There are many individual examples in military history of creative outsiders generating unconventional ideas that are now accepted wisdom.

In the application of air power, this includes John Boyd and energy manoeuvrability theory, and John Warden III and precision bombing.1

However, the shift in the past quarter-century from an industrial paradigm to an information paradigm in warfare has disrupted all conventional ways of thinking about conflict.

With hindsight the ‘revolution in military affairs’ of the early 1990s was a failed coup; the last act in the theatre of two-dimensional, linear industrial warfare. 2

The current and unfolding information revolution is a complete disruption to the previously-existing order. It forces us to change the cognitive models we use to represent reality and frame and resolve complex military problems.3

Warfare occurs within society — it is not isolated on a mythical battlefield where clearly defined rules apply.

Moreover, the information revolution has flattened what that society looks like: all combatants, adversaries, competitors and insurgents have access to the internet, low-cost technology and distributed communication systems. They are all connected. We are connected to them.

The fact of our presence causes a reaction, regardless of our actual behaviour.4

That means we can no longer conceive of military operations and plans unfolding in a linear, two-dimensional fashion. 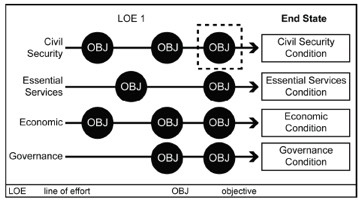 We start at a time, T-0, and progress through our objective to the End State.

Apart from the questionable assumption that the adversary and environment will agree with our plan, this ignores the complexity of external factors pressing on each ‘Objective:’ the complex interaction of human behaviours, the changes in perception, irrational decisions and equipment failures.

This is an excellent metaphor for the industrial warfare paradigm.

People and plans must move forward in time and space, and friction slows things down, but the final objective is ultimately achieved through overwhelming force.6However, what if we fight on a battlefield (and ‘operating environment’) that looks more like this (Map of the Internet, 2005). 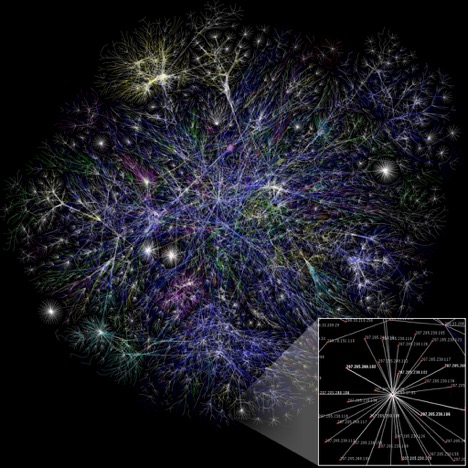 It is probably impossible to conceptualise, in human terms that can be displayed on this page, what the internet of 2019 looks like.

Moreover, this is essentially the problem we are asking fifth generation manoeuvrists to resolve.

What a fifth-generation manoeuvrist must develop and master is mental agility that is like the coming swarm: able to rapidly form ad-hoc networks, route around problems or blockages, and make decisions independently to achieve a broadly defined outcome.7

There are no concurrent lines of operation drawn on a briefing slide for a swarm.

The outcome itself depends on the behaviour or input of externalities to the system.

This may seem abstruse and theoretical.

However, the great advantage of the information revolution is that technology has coming close to providing us with the capability to represent human behaviour through the exploration of networks and systems, using visualisation tools once considered the realm of science fiction.

If the study of warfare is the study of human interactions, then technology allows us to edge closer to seeing the world outside the frame of our individual existence and cognition.

If we imagine the snapshot of the internet above as consisting of computers and people (an internet protocol address can be both a ‘thing’ on the internet and an individual user), we can begin to understand how a system functions.

Technology allows us to identify the bridges between ‘things’, or entities, such as radars, aircraft, trunked mobile radios and iPhones, and the system in which they function. This is the network layer that enables connections between nodes on different networks.

Previously, we could only conceptualise our own ‘local’ network. Now, the information revolution assists us to conceptualise multiple networks and understand how they connect.

What the swarming mind can do is understand the objects that comprise a network and visualise the networks that comprise a system. This system may be a set of human behaviours, such as a terrorist media network, or a nation-state’s power grid, or a collection of air defence radars, but it always consists of a hierarchy of objects and networks that inform human behaviours. The swarming mind can frame the problem and disaggregate it into specific components.

Properly implemented this cognitive framework will be transformative, allowing airmen to guide and observe autonomous systems and machine decision-making, instead of setting limits using a Boolean tree of decisions (much like the ‘logical lines of operation’ used in industrial warfare).

They will be integrators of technology, not just controllers.

This is far from a simple task.

However, it can be grown through culture. Clive James wrote that “culture is what is left when you take everything else away”.8

The Australian Defence Force has a robust culture that exists outside equipment, weapon systems and buildings. Culture grows and adapts within groups and individuals – networks and systems.

We now need to feed that culture and grow the fifth-generation manoeuvrist with the swarming mind.

In part two, I will explain how the ADF can incubate and grow a culture to master the emerging and disruptive technologies of information warfare.

Squadron Leader Dougal Robertson is an officer in the Royal Australian Air Force. He holds a Master of Arts in Policing, Intelligence and Counter-Terrorism through Macquarie University.

The opinions expressed are his alone and do not reflect the views of the Royal Australian Air Force, the Australian Defence Force, or the Australian Government. This article was published by the Central Blue on October 13, 2019.