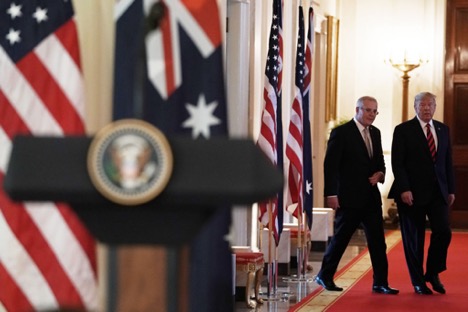 Prime Minister Scott Morrison’s successful US visit should not be regarded as a ‘set and forget’ box ticking exercise. Rather, it should be viewed as a sound basis for the government to pursue Australia’s national interests over the remainder of Donald Trump’s presidential term.

Notwithstanding the prime minister’s sharing of Trump’s embrace of ‘sovereignty’ and scepticism of certain UN bodies, trade looms as an area in which he will need to watch Trump closely. At the very least, Trump’s abrupt withdrawal of US troops from northern Syria is a reminder that there will always be policy differences between Australia and the US.

Just over a year out from the presidential election, Trump will be looking to show the US is ‘winning’. While he is highly unlikely to directly target Australia—we run a trade deficit with the US, pull our weight in defence spending, and are of growing strategic importance to the US—Trump’s trade goals may be inimical to Canberra’s. For example, although Australia and the US have agreed a strategic partnership on energy in the Indo-Pacific, Trump will be keen for the US’s bourgeoning liquefied natural gas sector to get a slice of the action in the region.

As well as ensuring Australia isn’t sacrificed as part of and deal between Trump and Chinese President Xi Jinping, Morrison will need to be attuned to US thinking on trade agreements with the UK, EU and India. Complicating this is that the Regional Comprehensive Economic Partnership, which includes Australia, China and India—but not the US—could be concluded next month. Following this, there’s likely to be renewed eagerness by corporate Australia to join China’s Belt and Road Initiative. Expect a prime ministerial visit to Beijing sometime next year.

Before any visit to China, Morrison will go to India and Japan early next year. While the ‘Quad’ will colour much commentary, a card Morrison might play is reform of the UN Security Council by calling for permanent membership for India. (Trump has followed his predecessor Barack Obama in backing India as a permanent member.) While China would oppose such a move, it would be a powerful symbolic gesture that would affirm the Morrison government’s view that the UN needs reform to maintain its legitimacy. India’s proud non-aligned tradition will continue to act as a brake on it being an enthusiastic ‘Quad’ member.

Russia will become more prominent on the prime ministerial radar. President Vladimir Putin will play a decisive role in the endgame of the conflict in Syria and that will have implications for Turkey, a key partner of Australia’s. On the one hand, Putin will want to keep his ally Bashar al-Assad in power in Syria. On the other, Putin will see the US–Turkey tensions as means of weakening Turkey’s commitment to NATO. If re-elected, Trump may choose to forge closer ties with Putin as a counter to China. And France, which, like Australia, is stepping up in the Pacific, is trying to bring Russia into the European tent, partly for the same reason.

While the Trump administration expects Australia to take more responsibility in the South Pacific, it’s also broadening strategic cooperation with Australia in infrastructure, overseas development, energy supply and critical minerals. Australia will encourage the US to build on these initiatives in forums such as APEC and the WTO and perhaps push for Trump to join the Trans-Pacific Partnership if he wins a second term. Last month’s signing of the Fiji–Australia Vuvale Partnership was a significant development, the prelude to the announcement of a joint peacekeeping mission in the Middle East. The partnership may serve as a guide to the Morrison government’s future engagement with other South Pacific nations.

The joint facilities will remain Australia’s most valued military contribution to the US alliance and will continue to grow in importance as strategic weight shifts to the Asia-Pacific region, space becomes more contested and nuclear arsenals are modernised. ‘Extended nuclear deterrence’ didn’t die with the Cold War nor did concerns about Australian sovereignty in relation to Pine Gap. Due to the evolving technical capability of the joint facilities, the Australian public may understandably feel entitled to a ministerial update more frequently than every five to six years.

While Australia hosting US missiles has been ruled out, there may be further collaborative developments in missile defence. This year’s US Missile Defense Review stated: ‘Australia participates in a trilateral discussion on missile defence with the United States and Japan. The United States and Australia meet annually to discuss bilateral missile cooperation. New areas of focus include joint examination of the challenges posed by advanced missile threats.’

And out of left field, the crisis in Syria will put pressure on Trump to offer sanctuary to Kurdish refugees. Don’t rule out Trump asking Australia to assist in an effective quid quo pro for upholding the Australia–US refugee resettlement deal agreed by Obama and former prime minister Malcolm Turnbull.

Mick McNeill was the locally engaged senior political analyst at US Embassy in Canberra from 2007–2018. The views expressed in this article are his own.

The featured image is credited to Alex Wong/Getty Images.