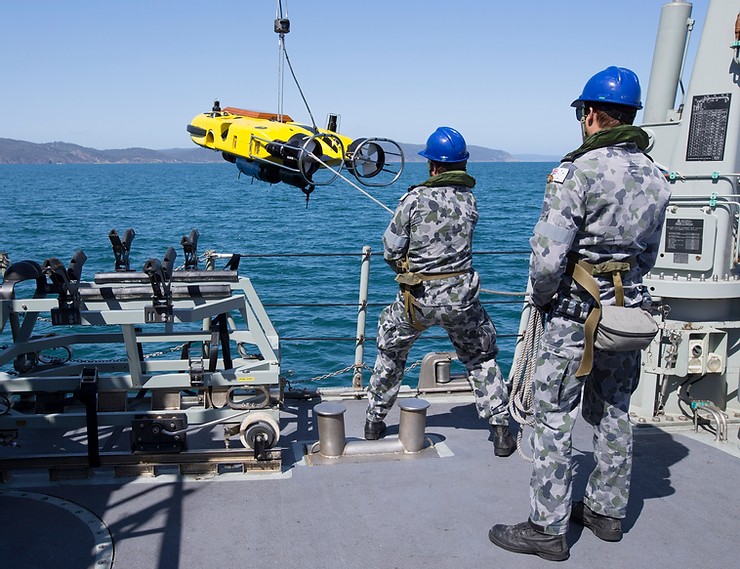 The rise of Robotics and Autonomous Systems (RAS) in all spheres of warfare has accelerated in recent times to a point where constant revision of tactics and procedures is now common practice.[1]

The area of mine warfare, and in particular Mine Counter Measures (MCM), has been no exception. Heavy reliance on RAS has not only replaced proven tactics but has also increased the demand on the autonomous systems to work efficiently at the cost of effective redundancy planning.

This leads to two questions; can we exploit the known weaknesses of adversary autonomous systems for maritime aerial denial?

Or can we manipulate the adversary’s autonomous systems to create an advantage?

A natural byproduct of increased scrutiny on MCM has been the divergence of attention from purely mine clearance to offensive/defensive mining operations.[2]

As RAS became the new normal in the context of MCM, a focus in identifying and exploiting the known vulnerabilities of these autonomous systems to increase the effectiveness of offensive mining efforts has grown.

The critical vulnerability of the MCM system, manned or otherwise, is the dependence on acoustic and magnetic search techniques as a means of location and identification of potential threats.

This is in addition to the communications link vulnerability that plagues unmanned technology and leaves it susceptible to electronic attack.

This may take the form of underwater guided munitions, sowed amongst a real or distraction minefield, that targets explicitly autonomous MCM assets.

This could be achieved relatively simply and inexpensively, due to the small size of the munition required and the simplicity of a sensor package that actively seeks known operating frequency range of enemy autonomous search systems.

The cost versus damage ratio would be favourable, and the kinetic destruction of an autonomous asset by a countermeasure does not confirm a mine field’s location, instead, it leaves a sense of ambiguity of threat presence.

The psychological effect of an autonomous asset being destroyed seconds after insertion into a possible minefield may also quickly interrupt the decision-making process of the enemy commander.

An argument could be made that a simple fishing net placed in the probable path of Unmanned Underwater Vehicles (UUV) could delay the MCM effort. This is somewhat true; however, a lone kinetic countermeasure could serve to provide the illusion of a persistent mine threat where there is none. It may also degrade the adversary’s physical ability to conduct MCM operations through asset attrition at a favourable cost versus damage ratio.

This concept is not restricted to underwater RAS, as these countermeasures could also target unmanned MCM Surface Vessels through search frequency identification and targeting.

Opportunities also exist for non-kinetic and clandestine countering of RAS behaviour models. Like any system that operates on a feedback loop (search/ return/ identify/ locate/ analysis/ action) there exists the opportunity to manipulate the flow of information overtly or clandestinely.

One such opportunity would be the manipulation of information, namely the acoustic signature, to delay or prevent entirely the identification and location of sea mines through acoustic jamming or acoustic signal manipulation.

This concept can be displayed through the provision of a hypothetical scenario.

The clearance route identified for UUV clearance will allow the Blue ATG to close to an optimal distance to launch Amphibious forces to regain control of the islands. Intelligence suggests the sea approaches have been mined and the MCM forces have already located and neutralised several conventional sea mines. An unknown threat, a sea mine with the ability to subtly manipulate acoustic sonar returns from MCM RAS, waits in the approaches.

The UUV proceeds along the clearance route, actively searching for anomalies that may indicate a possible mine, providing a visual representation of the acoustic return to the operator through a mission interface on the surface. The mine lays dormant until the acoustic signal from the UUV reaches it. A module within the mine identifies the frequency of the signal and triangulates the position of the UUV. Instantaneously the mine emits an acoustic signature that is received by the UUVs receivers.

This acoustic signal has been created by the sea mine, using the position and movement of the UUV, to alter the acoustic return of the UUV transponder, altering any possible return signal identifying an anomaly.

The UUV continues receiving acoustic signals consistent with known sea bottom types, displaying a flat sea bottom with no contacts of interest, or a signal that represents a large submerged wreck that does not present a hazard to surface navigation, back to the operator. No anomalies are detected, and the channel is assessed to be clear by the MCM forces. As the ATG moves through the channel, the sea mine functions, breaking the back of the high-value target critical to Blue force success.

A simple underwater weapon has not only managed to intercept and manipulate the behaviour cycles of enemy RAS but has also managed to kinetically function as designed, providing the occupying forces with a relatively cheap mission kill.

While this is somewhat beyond the scope of the function of current generation sea mines, the effect of manipulating sonar returns has been shown in nature. The Tiger Moth uses well-timed acoustic signals to evade predation by bats through jamming of the bat’s echolocation method of hunting. Upon hearing the echolocation of the bat entering its terminal attack phase, the Tiger moth emits a series of signals on the same frequency that is expected by the bat.

The unexpected clicks emitted by the moth confuses (while not completely jamming) the echolocation receptors of the bat by disrupting its known terminal location behaviour. This creates an error in the bat’s echolocation of the moth and affects the bat’s terminal attack phase. In controlled studies, the ‘silent’ moths (not emitting the disruptive clicks) were ten times more likely to be successfully caught by the bats, than the moths emitting the acoustically disruptive clicks.[3]

This behaviour displays the ability of the moths to use acoustics to disrupt the echolocation behavior of the bats successfully.

A consideration of this example of the Tiger moth is that it displays an inherently overt method of acoustic manipulation not entirely appropriate for a clandestine weapon such as a sea mine. The overt manipulation of an acoustic signal would provide an exceptionally quick way of anomaly identification, drawing unwanted attention to the mine. More importantly, this concept of information warfare through acoustic manipulation could be developed upon and introduced as a means for countering autonomous technologies and may significantly disrupt the mine warfare sphere if successfully developed.

Overall, a significant opportunity exists for RAS to be countered in mine warfare, particularly in MCM operations.

From an MCM standpoint, unmanned systems will reduce risk to human operators through the provision of results from a distance and may increase the effectiveness of MCM operations through higher fidelity information.

However, while these opportunities exist, so do the ability to manipulate the technology against the owner/user subtly or to remove the RAS asset even quickly from the battlefield altogether through the exploitation of known weaknesses.

While RAS will continue to improve MCM operations, treatment of these technologies as a panacea may be highly detrimental if all possibilities of countering and exploitation are not considered.

LCDR Nate Streher joined the Royal Australian Navy in 2005 as a Maritime Warfare Officer, before specialising as a Mine Warfare & Clearance Diving Officer in 2011. After service as Executive Officer – Australian Clearance Diving Team Four and multiple operational deployments, LCDR Streher chose to discharge for 18 months where he worked in Commercial Maritime and Unmanned systems.

Re-joining in 2018, LCDR Streher has since been selected as the Tactical Underwater Warfare Instructor on exchange with the Royal Malaysian Navy in Lumut, Malaysia. The opinions expressed are his alone and do not represent the views of the Royal Australian Navy, the Australian Defence Force, or the Australian Government.

This article was published by Central Blue on August 15, 2020.

Featured photo: Sailors from HMAS Yarra take control of the steading line as they deploy the ships SUTEC Double Eagle mine disposal vehicle during mine operations at Exercise Dugong 2015. (Source: Australian Defence Force)