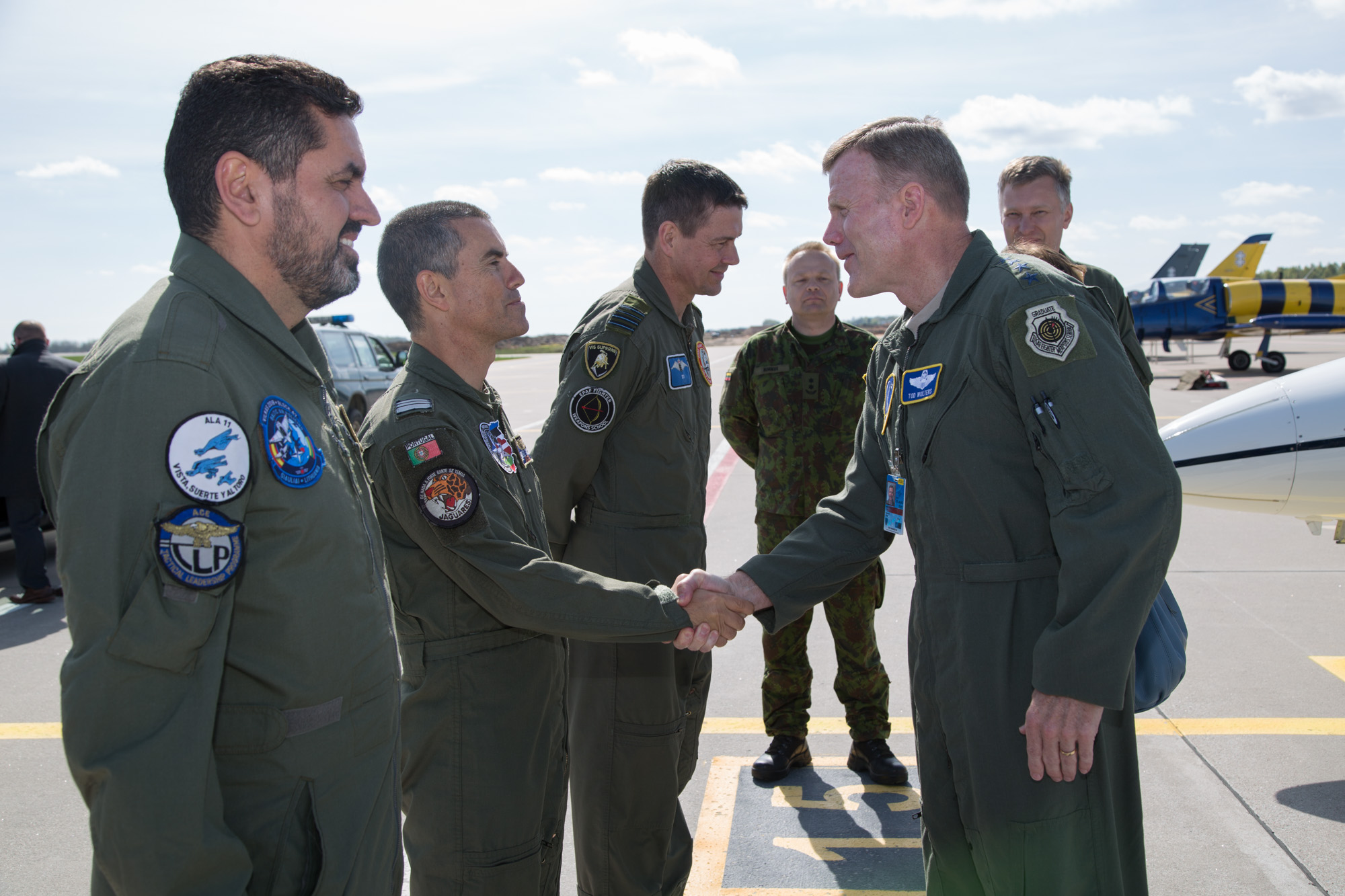 An additional detachment of the Spanish Air Force, also based at Šiauliai, will augment the Portuguese airmen during their rotation, next to a French detachment operating out of Ämari, Estonia as of May 3.

“As the Portuguese F-16 detachment commander, I’m proud of being part of this united effort, aware of the great responsibility and 100% committed to this mission” Lieutenant-Colonel Afonso Gaiolas, Commander of the leading Portuguese detachment stated in his speech during the ceremony. His detachment consists of four F-16 fighter jets and a total of 84 personnel.

The commander of the outgoing Danish detachment, Lieutenant-Colonel John Kristensen, took the opportunity to thank his Lithuanian hosts for their support.

“The Lithuanian Air Force and all the personnel on the Airbase provided outstanding support to us” he said.

Addressing his Airmen he added: “We have solved the mission with jets ready 100% of the time with only 54 people. That can only be done with dedicated and well trained personnel”. The Danish rotation was marked by their contribution to the 100th anniversary of Lithuanian independence for which Danish pilots conducted a flyby during a parade at Lithuania’s capital Vilnius.

Among the guests of the Handover/Takeover ceremony was General Tod Wolters, Commander Allied Air Command.

Addressing all three detachments he said “I’d like to express my personal and professional appreciation to you, the pilots, maintainers, mission supporters and operators for what you have done and will continue to do to secure the skies of NATO”. Allied Air Command, headquartered at Ramstein, Germany is NATO’s single command for all Alliance air matters and oversees all Air Policing in European NATO airspace.

Both Air Forces from Portugal and Spain are not new to the mission. During the fourteen-year history of Baltic Air Policing, the Portuguese Air Force deployed to Lithuania three times already in 2007, 2014 and 2016.

The Spanish Air Force is contributing to the mission for the fifth time after two deployments to Šiauliai in 2006 and 2016 and after augmenting the mission twice out of Ämari, Estonia in 2015 and 2017.

A third detachment from the French Air Force is going to take over an additional augmenting role from the Italian Air Force on May 3 in Ämari, Estonia.