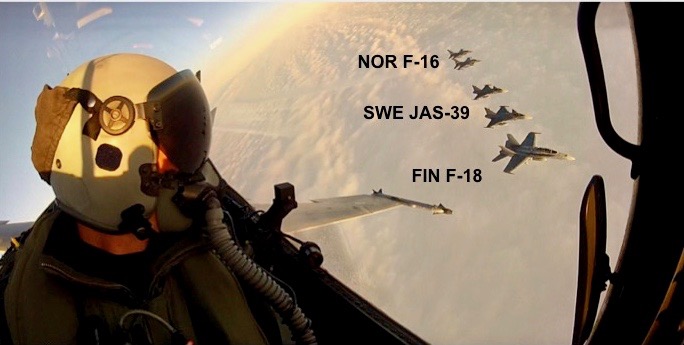 During a visit to Bodø Airbase on April 25, 2018, I had a chance to discuss Norwegian Air Force training with the Finns and the Swedes as they expand their cooperation to provide for enhanced regional defense.

Major Trond Ertsgaard, Senior Operational Planner and fighter pilot from the 132 Air Wing, provided an overview to the standup and the evolution of this significant working relationship.

With the Swedes and Finns, both not members of NATO, working with Norway, the lead NATO member in Northern defense, working more closely together, enhanced deterrent capability is being shaped in Northern Europe.

A very flexible capability has been put in place among the three nations through the Cross Border Training approach and one driven by innovations at the squadron level.

Indeed, the day I was there, I saw four F-16s take off from Bodø and fly south towards Ørland airbase to participate in an air defense exercise.  The day before this event, the Norwegians contacted the Swedes and invited them to send aircraft to the exercise, and they did so.

The day before is really the point.

And worked out among the squadrons themselves to turning flying time into cooperation to train for combat is the means.

It is being done without a complicated day-to-day diplomatic effort.

This is a dramatic change from the 1990s, when the Swedes would not allow entering their airspace by the Norwegians or Finns without prior diplomatic approval.

“In the 1970s, there was limited cooperation.

“We got to know each other, and our bases, to be able to divert in case of emergency or other contingencies.

“But there was no operational or tactical cooperation.

“The focus was on safety; not operational training.”

By the 1990s, there was enhanced cooperation, but limited to a small set of flying issues, rather than operational training.

“But when the Swedes got the Gripen, this opened the aperture, as the plane was designed to be more easily integrated with NATO standards.”

Then in the Fall of 2008, there was a meeting of the squadrons and wing commanders from the Finnish, Swedish and Norwegian airbases to discuss ways to develop cooperation among the squadrons operating from national bases.

The discussion was rooted on the national air forces operating from their own bases and simply cooperating in shared combat air space.

This would mean that the normal costs of hosting an exercise would not be necessary, as each air force would return to its own operating base at the end of the engagement.

The CBT started between Sweden and Norway in 2009 and then the Finns joined in 2010.

That shaped a template, which allowed for cost effective and regular training and laid the foundation for then hosting a periodic two-week exercise where they could invite nations to participate in air defense exercise in the region.

“And that is how the Arctic Challenge Exercise (ACE) entered the picture and has evolved.” 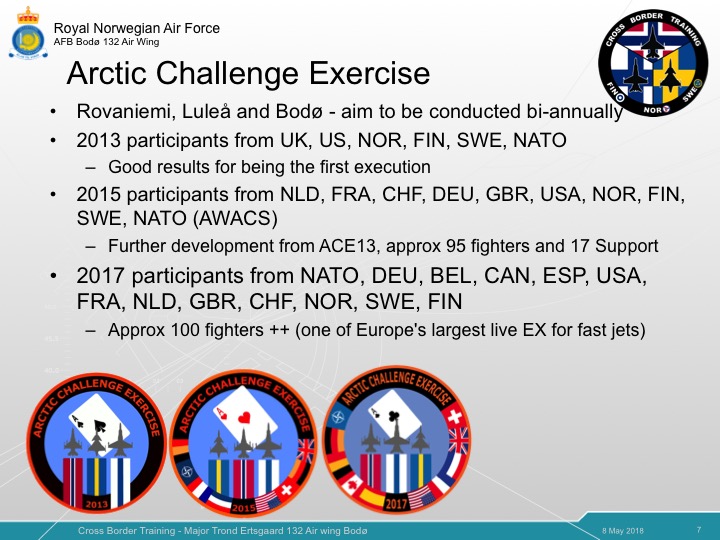 Since 2015 the three air forces have shaped a regular training approach which is very flexible and driven at the wing and squadron level.

“We meet each November, and set the schedule for the next year, but in execution it is very, very flexible.

“It is about a bottom-up approach and initiative to generate the training regime.”

The impact on Sweden and Finland has been significant in terms of learning NATO standards and having an enhanced capability to cooperate with the air forces of NATO nations.

And the air space being used is very significant as well.

Europe as an operational military airspace training area is not loaded with good training ranges.

The range being used for CBT is very large and is not a cluttered airspace, which allows for great training opportunities for the three nations, and those who fly to Arctic Challenge or other training events.

And the range flies over land so there is an opportunity for multi-domain operational training as well. 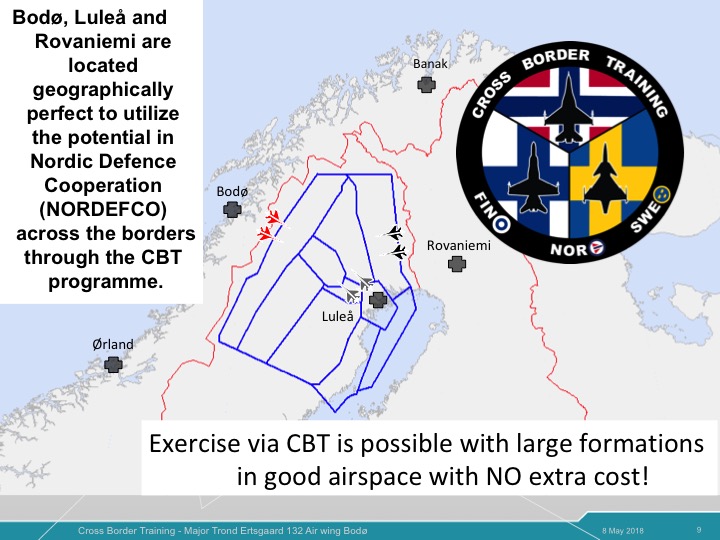 The flag for the Arctic Challenge Exercise reflects the nature of the effort.

“The main center flag represents the national responsible for the planning of the event.

“And then the flags of the participating nations are shown as well giving a sense of the collaborative scope of the exercise.”

He then discussed another exercise they have developed which they call Arctic Fighter Meet (AFM).

“We deploy to each other’s bases; so it is not the low cost end of CBT.

“We deploy four to five jets to each other’s base to do combat training.

“It is about getting to know each other; it is about making combat training more effective.”

What is most impressive can be put simply: “CBT was invented by the units and the wing commanders and squadron pilots.”

And given the strategic location of the air space in which training is occurring it is a key part of working deterrence in depth in the region and beyond.