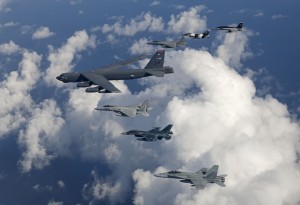 Humanitarin assistance and disaster relief operations are part of the military’s DNA.

Working with partners and allies in times of crisis and war embraces working with their societies as well when natural disaster strikes.

Participating in these operations as well provides an broader exercise in crisis management.

In an article published on March 21, 2014, we looked at how the US Pacific Command looked at the challenge.

During my visit to Hawaii I had a chance to talk with senior PACAF staff working in the exercise and international affairs arenas.

The command is in a good position as they’ve focused on working out approaches in the disposition of forces, and shaping effective working relationships with both the key allies who are investing in modernization as well as partners who are working to provide for their security with less robust financial and force structure means.

Both types of relationships are central to a 21st century approach to Pacific strategy and both were discussed with the PACAF as well as with the MARFORPAC staffs.

The evolution of good working relationships with the partners in the region is a strong foundational element for the deterrence in depth strategy being forged in the region.

During the discussion, one senior member of staff underscored the importance of a “one government approach” to working with partners and allies in the region.  “It is crucial that regional the trade relations allow for growth by all the members so there are not weak and failed states within the region which can be exploited by those who wish to do so.”

By working in the region with the various agencies of the US government, the goal is to provide a range of means to provide for regional security.

With regard to the military component, the emphasis is on going beyond narrowly based bilateralism to shaping effective multilateral relationships and capabilities.  The exercise regime is a key venue through which this change is being carried out.

As one participant put it:

We are going beyond a hub and spoke, bilateral exercise approach to a multilateral approach.

The purpose is not just to meet and work together but to build partner capabilities as well as our own and to be prepared to work effectively together in crises, either humanitarian or otherwise.

Seen from Washington and budgeters, exercises might seem the cherry on the cake.

And as one Marine noted later during my stay, “There are no jobs associated with funding exercises seen from the standpoint of Congressional districts.”

But the reality as seen from Hawaii is quite different.

Exercises are the venue through which the US actually can shape more effective US capabilities, partner capacity and  crisis response approaches and capabilities.

There is another aspect to the centrality of exercises in shaping 21st century capabilities: core allies are adding new systems and capabilities.

How will these work with US forces and capabilities in the period ahead?

How will multiple sum force gains be achieved?

The answer in part is to leverage an exercise regime to add in the force re-shaping process.

For example, the Cope North exercise held in Guam was started as a US-Japanese exercise.  Now the Australians are core members of the exercise.

In addition, new participants were invited to participate in the HA/DR parts of the exercise as well.

As one participant noted:

At this year’s Cope North the South Koreans came with their CN-235s to participate as well as the Kiwis from New Zealand and Filipinos as observers.

Such participation provides a solid basis for expanding their roles as appropriate.

Another aspect has been illustrated by the evolution of Red Flag.

As one participant put it,

Our role as a facilitator is growing in broadening the engagement opportunities for allies to work together.

A good image of the change is that an Aussie Wedgetail was doing Command and Control for US, Japanese and South Korean jets at the recent Red Flag exercise.

And, for the first time, South Korean jets crossed through Japanese air space to come to fly with the participants in Red Flag.

The process of preparing for an exercise regime is part of the outcome as well.  The USAF sits down with counterparts and sorts out a 3-5 year plan for specific national exercise participation.  Through that process the partner nation can sort out its way ahead with regard to the operations of its forces and the USAF understands better where that partner is headed as well.

In other words, exercises fit the nature of the region well, in that the U.S. is the core bilateral partner to many states in the region.

Exercises allow other partners to join in without hosting permanent U.S. bases.

As one participant put it: “We don’t want to be parked throughout the region; and our partners do not necessarily want us to be either.”

This means in a world where “places not bases” is a key focus of activity, bilateral and multilateral exercises become a means to an end: shaping real deterrent capabilities with enhanced crisis response readiness.

An additional venue, which provides for real world collaborative efforts on a regular basis, is the frequent visit of forces which create humanitarian disasters.  The region represents approximately 80% of the world’s natural disasters so it sees frequent need for partners and allies to work together in extreme circumstances.

The approach being shaped by US forces in the Pacific is not to just show up on an ad hoc basis, but to forge integrated capabilities to show up and work with partners to enhance their ability to effectively to take care of their needs or to be organized to accept multi-lateral force engagement in support of a relief effort.

Clearly, Operation Damayan is a case in point. And in this crisis, the USMC and USAF worked hand in glove with support from the US Navy to insert a force to help get the relief effort started and largely withdrew within three weeks.

We published a wide range of reports on Operation Damayan earlier and the conclusion of those reports underscored the evolving approach of the US military in the Pacific:

On the US side, the story is rather a straightforward one: the USMC, the USAF and the USN came rapidly, created infrastructure within chaos to allow for the relief effort to follow and then within two weeks the core insertion force had left.

This is a story of coming to the aide of the Philippines rapidly as only the military can do, and bringing core pieces to the effort which allowed the follow-on forces, in this case relief agencies and personnel to follow.

In short, exercises and shaping approaches to better organized responses to HA/DR events are not an add-on to operations, in many ways they are the operations which build deterrence in depth for the period ahead.