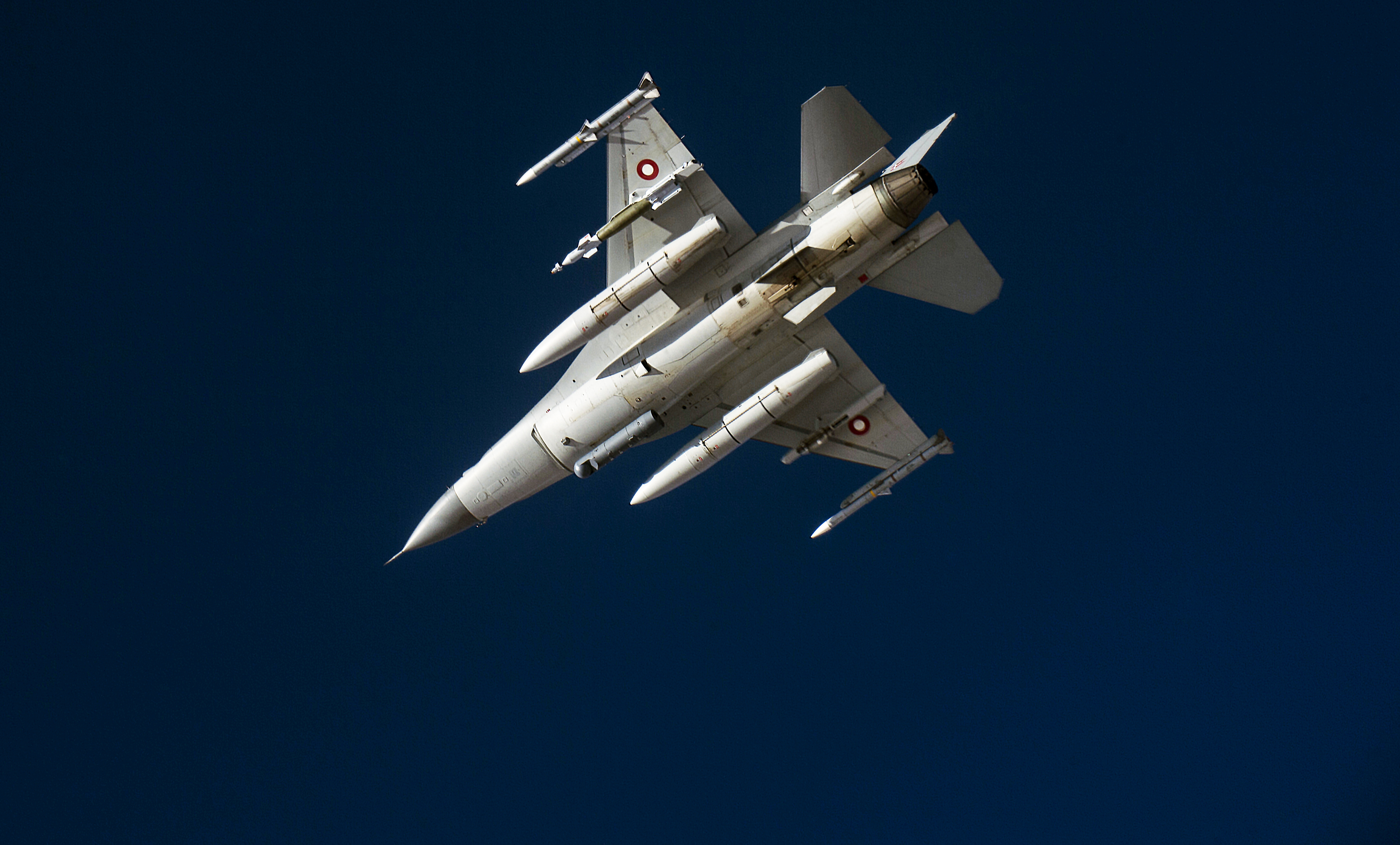 During my recent visit to Denmark, I had the chance to visit the Royal Danish Air Force fighter base at Skrydstrup.

Squadron 727 and Squadron 730 are both located there and are currently flying F-16s but getting ready for a transition to the F-35.

The base comprises 856 hectares and has two runways both 3.5 km long.  On the widest track two aircraft can operate at the same time.

The 2010-2013 Defense Agreement set the Fighter Wing at 30 operational F-16s. A few T-17 Saab Supporter which are used for training and transport tasks as well as a Search and Rescue helicopter from Helicopter Wing Karup which operates for emergency needs operate their as well.

The Danish Air Force is undergoing a double transition.

The first is the broader challenge of transitioning from expeditionary operations associated with the land wars in the Middle East to a return to direct defense.

During my visit I had a chance to talk with Col. Uffe “GUS” Holstener-Jørgensen, the Wing Commander, about his experience with the F-16 and the F-35 transition being worked by the Air Force.

The Wing Commander has been flying the F-16 since 1992 and was an exchange pilot with the USAF, flew in various expeditionary operations, including in Afghanistan.

With the end of the Cold War, the Danish Air Force shifted from what they referred to as a garrison defense role to an expeditionary one.  This was a work in progress after the Cold War, which required changes in how the Air Force operated as well as in the evolution of the F-16 itself.

The operational side meant that the Danish Air Force had to learn how to operate far from home, a task which required changes not only in the Air Force but in how the Air Force was linked to the broader Danish defense force and NATO, a subject which I discussed the day before with a senior Danish officer at Karup Airbase further north in Jutland.

This has several components from the standpoint of operating the F-16.

The first has been simply being able to train and operate with other coalition F-16 partners, notably within the EPAF or the European Participating Air Forces.

“All the F-16 users in Europe have our own meeting forum where we talk about the development of the F-16s together with the Americans. Because Denmark is a small country, we don’t have the capacity to think what it is we need and then develop it. We need a big brother like the United States Air Force to actually develop the aircraft in consultation with us and to leverage their engineering capability to develop new capabilities.

“The EPAF collaboration on the F-16 has in my mind been the keystone to success in bringing forward F-16 capabilities, to where we are today with an advanced F-16. Indeed, today we have an outstanding offensive weapons portfolio for the F-16.”

Colonel Holstener-Jørgensen emphasized that a major advantage the F-16 program has is the significant number of users, which means that there are significant numbers of airframes in operation, which facilitate investments in modernization of the aircraft.

“With the very large number of airframes out there, that allows the cost per tail to be brought down significantly.”

The cooperation with the other European F-16 partners extended to operations in Afghanistan where the European Expeditionary Air Wing operated together where Denmark worked with Norway and the Netherlands in Afghan operations.

Although the cooperation in operations did not extend to joint maintenance, but at the training level there has been a very flexible approach to working together.

Col. Holstener-Jørgensen added: “At the European Fighter Weapon Instructor Course in Leeuwarden, we actually do full integrated ops where a Danish F-16 pilot can fly a Norwegian or a Dutch F-16 and vise-versa.”

This coalition integrated approach which has shaped the F-16 is clearly something which the Danes are committed to supporting and benefiting from going forward, and in this round, the British are flying the same aircraft as the Northern Europeans and the Dutch so there are expanded collaborative opportunities.

And put in blunt terms, the Danes are among the most significant innovators in working coalition ops and perspectives.  Given their size they need to be but clearly they are cutting edge with regard to working the coalition perspective.

Their knowledge of how to evolve the F-16 over the past twenty years as they evolved their expeditionary experience is a sunk cost of capital investment, which they carry forward into the F-35 global enterprise as well.

As then Col. Anders Rex, now Major General Anders Rex, put it during our 2015 conference on air power:

We have a core group in the Danish Air Force, which has done several coalition operations, and when we are not doing that we participate in multinational exercises.

This is a core competence that the Danish Air Force has developed, and as we do so we work to find the gold in each coalition operation.

But the transition is challenging but will benefit from the standup of the global enterprise, which for F-35A users starts at Luke AFB where the coalition partners and the USAF train their pilots and maintainers.

“We will get our first F-35s at Luke within the next three years, and we develop our basic flight capabilities there and transition then to Denmark in 2023 and will end F-16 operations probably by the end of 2024.

“During that two year transition, we will have dual operations.  We have limited staff in terms of pilots and maintainers and that will pose a challenge in managing the transition for sure.

“We can leverage the transition to work 4th-5thgeneration integration on the fly so to speak and we can also use our F-16s perhaps to red team our F-35 training in Denmark as well.

“By dual operating for a period of time we can gain knowledge of how to operate with legacy aircraft with our F-35s more effectively as well.”

Coalition partners conducted the operation as part of a broader strategy to degrade and defeat the Da’esh.