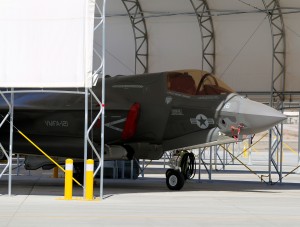 During our visit to VMF-121 in Yuma as the Green Knights were preparing to work towards their operational deployment to Japan, we had a chance to talk with then Major Summa who become the CO of the Warlords in 2015 and served in that capacity through June 2017.

During that visit, Major Summa provided a very clear overview on the F-35 and its role for the USMC.

That interview was first published on August 6, 2014 and that article follows:

Question: How would you describe the current role of the squadron?

The Marines focus on a process of giving the airplane to the operators and let the operators figure out how best to operate and then use the aircraft.

Our leadership has prepared the way for the coming of the F-35 to the USMC and has worked hard to ensure that the infrastructure is in place to allow us to train and use the aircraft.

For example, when Lt. General Trautman was Deputy Commandant of Aviation he focused on preparing Yuma to be the home for the first F-35 squadron.

Clearly, being here with MAWTS-1 gives us a good advantage to get a good start on operating, training and shaping the tactics of the new aircraft for the MAGTF.

Question: Putting the plane in the hands of the operators is a key part of developing the aircraft as well isn’t it?

It is. Every time we fly, we are learning something.

While trained Test Pilots are operating instrumented aircraft on a detailed test plan, in Yuma you have operational pilots flying the jet everyday gaining data points that may not have been discovered by Developmental Test.

By data points I do not mean safety of flight related items, I am referring to operational data points.

More along the lines of how to optimize and use the multiple sensors to accomplish a task or execute a mission set.

Since we have such a good working relationship with the Developmental Test entities, the Joint Operational Test community, and the individuals from industry who are SMEs on the systems, we can get immediate feedback when questions arise and then promulgate that back out to the community.

For example, last week we spent several hours in the vault with pilot training officers and with pilots who have been either MAWTS or Top Gun graduates or instructors.

We compared our operational experience with what has been developed so far with regard to our joint tactics manual which was written more than year ago, based on expectations developed from flying in the simulator.

Now we are seeing things in the operational airplane.

So how do we change?

How do we improve, update and morph the manual to where we see the plane operationally performing?

Where do we think we are going with the next drop of software in the plane?

Question: How do you externalize your learning outside of the squadron?

One way is working with the USAF at the 422 Test and Evaluation squadron at Nellis.

We tend to busy here, so we send operators from the training department or former patch wearers (MAWTS-1 and TOPGUN) to work with SMEs from the Navy and USAF at conferences or simulator events.

The young senior company grade who are coming off of a tour with a Hornet or a Harrier and now wearing a Green Knights patch go into the room with the aviators at Nellis with F-16 and F-15 pilots and work through the process. 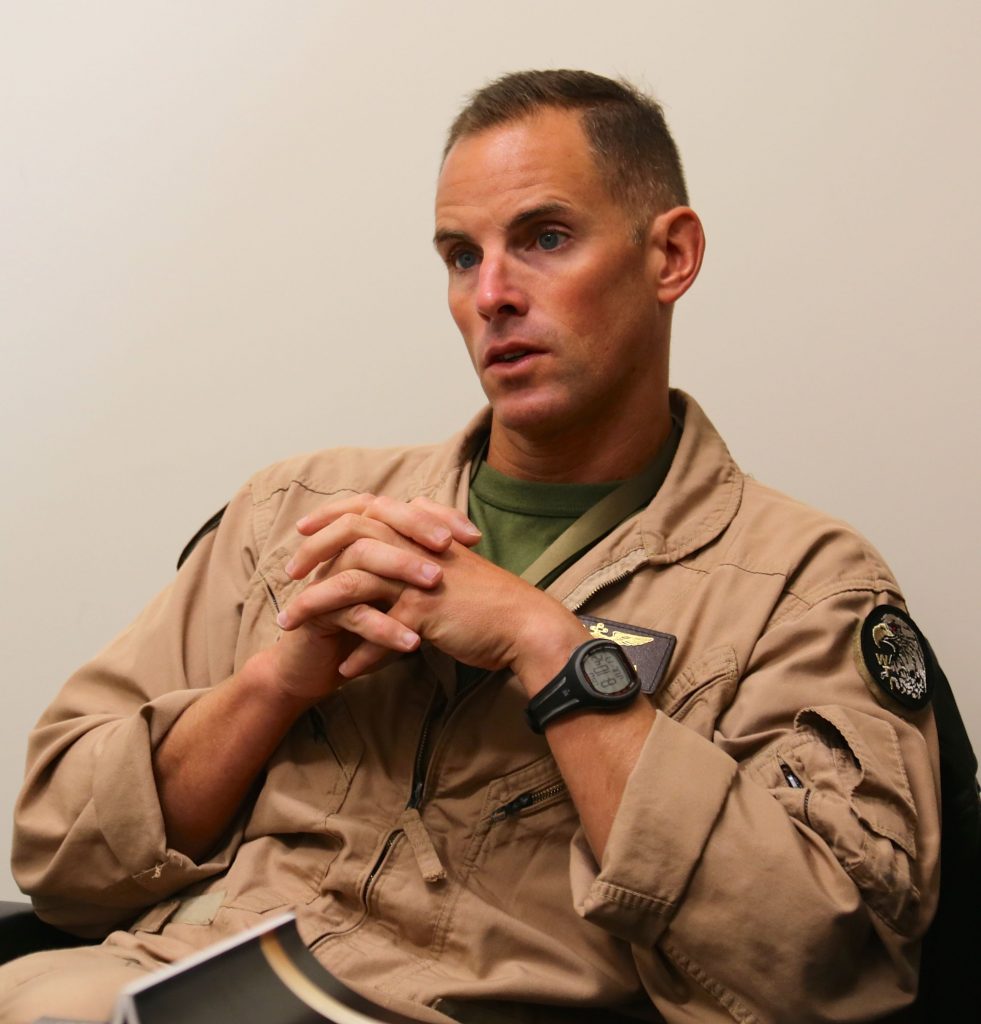 In effect, an F-35 enterprise is emerging built around a group of individuals in the profession of arms who want to make this airplane as lethal as possible.

People come in from different backgrounds – Raptor, Eagle, Viper, Hornet or Harrier – and are focusing on the common airplane and ways to make it work more effectively in a tactical setting.

And talking to the experience of a common plane is a crucial piece of the effort.

When an F-35 pilot sits down regardless of what service he is in, he’s talking with an individual from another service on the same data point.

Let me explain what I mean.

If I sat down as an F-18 pilot, and I wanted to talk about AMRAAM performance, I was talking about it relative to how it integrated with an F-18.

The F-18 is a Boeing product, a McDonald Douglas product, totally different than F-16, which is a Lockheed product.

When I talk AMRAAM with an F-35 pilot from the Air Force, maybe one of the squadrons at Luke.

When an F-35A pilot talks with an F-35B pilot and they discuss what they would to see with the evolution of the aircraft they are discussing essentially the same airplane and its evolution.

It is two operators of the same airplane focused on what they want to see evolve even though they are in different services.

And the commonality point is really lost in the broader discussion of the F-35.

And when it comes to strategic impact it is the commonality associated with logistics, which will have a really significant operational impact.

The interoperability at the supply level, the logistics level, the procurement level or the maintenance training level is a key foundation for joint and coalition airpower going forward leveraging the F-35.

Question: Let us focus on the squadron and its composition and work schedule, so to speak. What is the current situation?

We have 16 airplanes in the squadron. We have 15 pilots who have gone through VMFAT-501 at Eglin.

Nine of those pilots have gone through S/TOVL training and are qualified completely to operate the plane that way.

The others will complete the syllabus shortly.

Question: Are these primarily Hornet or Harrier pilots?

We only have F-35 pilots. Our flight temp is Tuesday through Friday.

We have the only organic maintenance department in DOD.

We have the normal technical representative support from contractors as one would expect with an organic squadron.

We are 260 strong in the squadron and we run two shifts, six five days and six five nights a week. Our pilots fly around 15 hours per month.

Question: When you fly the plane how do you balance the air-to-air and close air support missions?

That is a good question.

The plane and its combat systems and the way the cockpit is designed allows the pilot to handle the missions in a very effective an integrated manner.

To be able to do CAS, you have to make certain that you can suppress threats that would make it prohibited.

With this plane, you can affect the environment to make CAS more readily available and more quickly.

Question: The F-35 is a multi-tasking aircraft and as such how do you approach doing air-to-air and air-to-ground missions?

You can flip between the two without ever forgetting where you were on the last one.

And let me explain that a little bit better. In the F-18, when we were going to air-to-ground mode specifically on the strike, and we are using the radar, and if we want to the targeting pod, we would get to a certain point in time in the mission, where we have to use some sort of a planning tool.

The pilot would have to sort out when he would be able to go all heads down to try to find the target and employ on the target.

And I need to have a certain amount of distance between me and a threat so that when I come heads back up and start looking for possibly an air breathing threat or a surface-to-air missile, would need to suspend the task of employing that piece of ordinance or that weapon for the CAS mission.

This airplane’s different because with the data being fused, I’m not using multiple different displays with each.

The main difference that I see between federated and fused systems is in the F-18, not only was it all in different displays, but each sensor had its own uncertainty volumes and algorithms associated with it.

It was up to me as an aviator knowing the capabilities and limitations in my system to decipher and draw the line between the mission sets.

Because the fidelity of the data is there right now, which allows me to determine if I need to go back into an air-to-air mindset because I have to deal with this right now as opposed to continuing the CAS mission.

And I have a much broader set of integrated tool sets to draw upon.

For example, if I need an electronic warfare tool set, with the F-18 I have to call in a separate aircraft to provide for that capability.

With the F-35 I have organic EW capability. The EW capability works well in the aircraft. From the time it is recognized that such a capability is need to the time that it is used requires a push of a button.

It does not require that a supporting asset be deployed.

Question: Obviously your pilots need to be trained to combine the air-to-air and CAS capabilities and to use the new organic tools sets as well?

Now we’re going to have a pilot that’s versed in doing CAS, if he needs to use the electromagnetic spectrum or exploit it to accomplish his mission, he’ll be educated and have the equipment to do so.

If he needs to use it in the air-to-air arena to exploit it, to accomplish his mission, he’ll have the training and the equipment needed to use it as well.

In the current situation, I would deploy a Prowler to work with my legacy fighters.

The Prowler would have to be sortied and would operate only for a period of time and in a specific operational area.