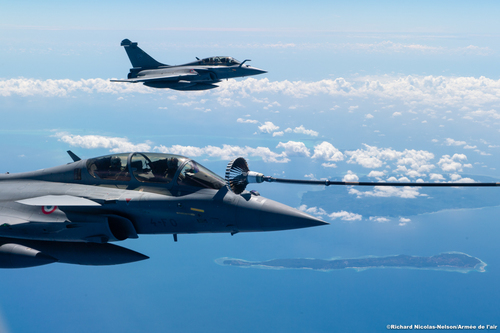 As the Paris Air Show gets ready to open its doors next week, one can only welcome the long-awaited sense of reconstruction the French Air Force is championing right now.

After decades of losses and base closures in the name of post-Cold war peace dividends and public policy optimisation, the sense of hope is palpable as defense budgets have been a bit steadier, while a neo-gaullist political support allows French Airpower to project itself in the XXIst Century with confidence.

The Future Air Combat System (FCAS) is of course at the center of the vision of the French Chief of staff of the Air Force, General Philippe Lavigne.

If such a project failed in the past to mature as a Franco-British cooperation one, the hope has been under President Macron to federate it at a European level with a Franco-German pillar as the foundation.

Since the letter of intention about the FCAS signed a year ago by French and German ministers of defense, Florence Parly and Ursula von der Leyen, several milestones have been completed.

The highlight occured last February with the granting of a joint contract for Dassault and Airbus to conceptualize the global architecture and the signing of an agreement between Safran and MTU to design a common engine for the next generation fighter.

Facing the F35 competition among European partners, the fact that Spain is being interested in joining FCAS is good news for the project, not only because of the political dynamics it embodies, but also because with a minimum of three partners, funding for parts of the long-term project can be triggered as part of the European Defence Fund.

Of course, we all know with European cooperation that the devil lies in the details, and only the future will tell what concretely comes out of the current political good will, given the recent European elections, the change of political actors and a slow economy.

However. no matter what happens over the course of the next twenty years when FCAS is supposed to be completed, the FAF trajectory – or “Flight Planning” as the French Chief of staff has labeled his strategy – is crystal clear and is on its way to reach a new scale.

Like other advanced Air forces in the world, this « change of scale » is enabled by various “bricks,” with space resiliency as a sine qua noncondition for such a system of systems to operate.

Connecting the next generation fighter, first-line combat and/or jamming UAVs, missiles, various combinations of tankers and transport aircrafts, as well as ground and sea-based assets requires space-based reliance and autonomy as well as other non-space based communication and ISR redundant means.

The other crucial brick is the role of the new generation tanker, the one some French officers nicknamed the “Rolls Royce of all tankers,” i.e. the Phenix A330 MRTT.

Having already being tested by the FAF through various exercises (such as last year’s Pitch Black 2018 held in Darwin), exchange of pilots and on the battlefield in the Middle-East with her British and Australian counterparts, the new tanker is now part of the “31e Escadre aérienne de ravitaillement et de transport stratégiques (EARTS)” at Istres Airbase and is to be delivered to reach a full fleet of fifteen aircrafts by 2028.

Such an upgrade has been designed over the past years within the context of the French airbone nuclear component modernization, as the French tanker force is traditionally dedicated to the French Strategic Air Forces Command (CFAS for “Commandement des forces aériennes stratégiques”).

But  with the new tanker comes far more than a mere replacement for a forty year old fleet of C135. It actually kills three birds – or should we say “three enemy targets”–with one stone – flight – !…

It is meant to replace the French strategic transport fleet of A310 and A340 ; it is meant to replace the C135 ; but thanks to the cockpit configuration and hyper-connectivity revolution, it can also welcome aboard not only ISR experts (transferring in France from the world of Mirage F1 /Rafale reconnaissance aircrews), but also a true C2 capability.

As early as next year and with the delivery of the third Phenix, the new “Standard 2” which includes the L16-JRE constitutes a first step towards the future connected FAF and FCAS.

The simultaneous arrival of long-awaited tactical capacities on new generation air assets, such as the A400M, change the con-ops for the French Air Force.

As the Commander of the 31e Escadre, Colonel Sébastien, explained in my interview with him : “With the current developments under way (such as HD SATCOM), new ConOps can be imagined by playing for instance on the complementarity of the A400M as a “tactical tanker” and the MRTT as a “strategic tanker”. (…)

But these new capabilities can also allow the President to be directly in contact with the pilots during a long-range, long-endurance raid.»

Such an evolution – whether for an expeditionary raid (such as in Mali in 2013 or Syria last year) or ultimately a nuclear one – gives the political authority the option of reversibility, which is in itself a game changer in terms of credibility, and in the end, as far as the ambition for French sovereignty is concerned.

Talk about shrinking the OODA loop !

The featured photo shows a Rafale involved in the 2018 Pitch Black exercise.

An article published by the French Embassy in Australia last year highlighted the FAF involvement in Pitch Black 2018:

From the 27th of July until the 17th of August 2018, the French Air Force will participate to an Australian Biennial exercise called “Pitch Black”. To get to the Oceania region, three Rafale of the French Air Force have covered more than 14,000km to arrive in Darwin, North of Australia, on Tuesday 24th of July. Recap of a four days journey.

Arrived on the 20th of July on the Air base 104 of Al Dhafra in the United Arab Emirates (EAU), and escorted by a French C-135 tanker aircraft from Istres, the French Rafale started making their way to Singapore on the 22nd of July in the morning.

The crew formed of 4 pilots from Mont-de-Marsan Air Base & 8 pilots and navigators from Saint-Dizier Air Base were ready to leave. The other 40 airmen, in which, mechanics, commandos, logistics specialists, accompanied by a doctor traveled in an Australian KC-30 MRTT landed the night before on the Emirate Air base.

In the framework of a long-term co-operation between Air Forces of both nations, Australia has assigned a tanker aircraft to the French crews to participate to the travel of French Rafale from the EAU to the air base of Darwin where airmen of 16 different countries will train together.

At 6.30am (local time), the OK is given to the aircraft to take off. An early morning departure explained by technical reasons: “In the case of a long distance travel such as this one; the departure time is decided depending on the outside air temperature and the petrol carried in the tanker” explained Group Captain Arnaud Brunetta, Commander of the French contingent inside the “Pitch Black” exercise.

In total, more than seven and a half hours of flight have been necessary to the crew to reach Singapore. Carrying 5 tons of air freight and 44 military personal on board, with extreme temperatures, the KC-30 MRTT demonstrated an incredible endurance. In spring 2018, the Air Force will welcome its first MRTT which Operational Capability is schedule in 2019. This aircraft will replace the C135.

During the travel, three air-to-air refueling were successfully realized by the pilots of the 4th & 30th fighter squadron, the last one being realized in the Indonesian air space and a total of 31.5 tons distributed to the fighter aircrafts. It was a first! “In the past, Rafale have realized hundreds of air-to-air refueling on the Asutralian KC-30A, but only during war missions inside the Joint Operation Area of the Middle East and not as part of a convoy mission” explains Colonel Brunetta.

In order to ensure the safety of the flight and the smooth air-to-air refueling, the Commander Antoine, pilot of the Rafale and chief of the French detachment “fight” during the exercise, was supervising the manoeuvres side by side with the Australian crew in the cockpit, by being in constant radio contact with the French pilots.

Arriving in the Australian Territory

Tuesday 24th July: Last step of the convoy mission: from Singapore to Darwin. After an important briefing between French & Australian crews which allowed to determine different procedures.

It’s 9am when the Rafale depart from the civilian airport of Singapore, followed by the KC-30 MRTT. “It’s during this briefing that air-to-air refueling amounts are calculated, depending on potential alternates (landing site planed in case of emergency) and of course the safety procedures are reminded to everyone”, added Captain Thomas, Rafale pilot.

At 10.10am happened the symbolic crossing of the equator. After a four and a half hour flight without issues over the Indian Ocean, the airmen landed on the Royal Australian Air force Base in Darwin, North of Australia. Only 2 air-to-air refueling were necessary to the aircraft to reach the Australian continent. They joined the CASA CN235 of the transport squadron 52 “Tontouta”, of French Armed Forces in New-Caledonia also deployed for Pitch Black as well as other airmen who have arrived before in order to prepare for the exercise.

This article was first published on Breaking Defense on June 13, 2019.

San Diego. The Indian Navy accepted the first two of its MH-60R Multi-Role Helicopters (MRH) from the US Navy in a ceremony at the Naval Air Station North Island San…

This compendium of articles from Defense.info and Second Line of Defense are from the period from July 15 through July 23, 2021. These are the articles included in this compendium:…

Four Air Force F-35A Lightning II pilots have graduated from the first F-35A operational conversion course to be completed in Australia. No. 2 Operational Conversion Unit conducted the course. The…

VADM Lewis on the Re-set for North Atlantic Defense

In May 2021, we had a chance to discuss with VADM Lewis the standup of two new fleets in Norfolk and how he saw the way ahead for North Atlantic…

The Biden Administration and Afghanistan

An Update on the Nigerian Air Force and Super Tucanos

The Nigerian Air Force (NAF) has added another six helicopter pilots to its fleet, as the force continues to expand amidst the delivery of new aircraft. On 16 July, the…

The Chief of Air Force’s strategic intent update makes airbases a priority for future investment. Airbases certainly seem ripe for change. Conceptually, they have barely changed since World War Two when grass runways gave way to concrete ones. In this the Chief has laid