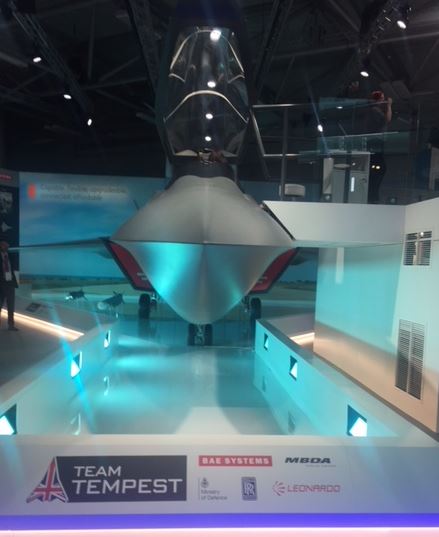 At the Farnbourgh Air Show last year, then Defence Secretary Gavin Williamson, highlighted the new UK Combat Air Strategy and with it the launching of Team Tempest.

The focal point of his presentation on July 16, 2018 was the goal of developing a next generation fighter.

The UK MoD story published that day explained the initiative.

The concept aircraft has been put together by British firms including BAE Systems, Leonardo, MBDA and Rolls-Royce, which have joined together with the RAF Rapid Capabilities Office to form ‘Team Tempest’ to pursue the opportunity.

The MOD will now set up a dedicated team to deliver the combat air acquisition programme.

They will deliver a business case by the end of the year, and have initial conclusions on international partners by next summer – with engagement with potential partners beginning immediately.

Early decisions around how to acquire the capability will be confirmed by the end of 2020, before final investment decisions are made by 2025. The aim is then for a next generation platform to have operational capability by 2035.

The UK is already a world-leader in the combat air sector, with a mix of skills and technologies unique in Europe, supporting over 18,000 highly skilled jobs. The sector delivers a turnover in excess of £6bn a year and has made up over 80% of defence exports from the UK over the last ten years.

Investment in combat air technology, combined with the strengths of UK industry, has resulted in the UK being the only Tier 1 partner with the US on the F-35 Lightning II programme, with British industry delivering 15% byvalue of every F-35 built. The UK has been able to help define the operational capabilities of the aircraft, while reinforcing UK industrial capability, critical skills and supporting wider economic prosperity.

The UK also continues to lead the way in combat air power as one of the four partner nations in the Eurofighter Typhoon programme. With more than 20,000 flying hours on deployed operations to date, the Typhoon delivers world leading capability, unparalleled reliability and proven interoperability with our allies. The MOD will continue to invest in the Typhoon for decades to come, with the best technologies being carried forward on to next-generation systems.

The F-35 Lightning II and the Typhoon are two complementary multi-role combat aircraft that will make up the RAF’s combat air fleet, placing the UK at the forefront of combat air technology – with the Typhoon expected to remain in UK service until at least 2040.

The problem posed by having at the vortex of this launch a new combat aircraft is that really the main thrust of the way ahead for the decade ahead is not really about that – it is about evolving new capabilities which flow from the Typhoon-F-35 integration effort and from the work with global F-35 partners on weapons and remotes.

At some point, I am sure a new combat platform will emerge from this, but the focus here is clearly quite different from the Franco-German announcement which focused clearly on the need to launch a new fighter and to use that launch point as the iron magnet to draw together the strands of airpower modernization.

In meetings last Fall and this Spring in London, it became apparent that the British approach to FCAS is very clear – leverage the Eurofighter/F-35 dyad to figure out what to do next in the air combat development area. it is clearly about leveraging the dyad of Typhoon and F-35 to shape a decade or two of innovation and to leverage that UK, allied and partner development process to deliver what is to come next.

It was pointed out in private meetings that the UK was following what they saw as the USAF lead whereby the USAF was not committing itself to a sixth gen aircraft but to leveraging fifth gen with unmanned with the legacy fleet and weapons modernization to sort out what comes next.

The Brits with whom I met underscored that Team Tempest was not necessarily targeting a new build combat air frame, but really trying to leverage the innovations of the next decade to position UK industry to build, shape and craft the capabilities needed in the 2030s and 2040s.

Rather than having a clear commitment to a future combat fighter, it was a commitment to building out air combat capabilities to the point where new platform decisions could be taken.

But these decisions would be taken as the only Tier One partner in the F-35 with a 15% stake in the global program. This is a very different approach being proposed by France and Germany and allows Britain as well to work with the very significant F-35 global community, which might well join in a broader leveraging strategy with the RAF.

In my view, the core thrust of UK efforts to shape a way ahead are a function of six interactive efforts or dynamics which can be seen in the graphic below. I will focus on each of these key aspects in separate pieces, but start in reverse, namely by looking at the Team Tempest dynamic.

In effect, Team Tempest is focused on generating effective technology demonstrators from UK defense industry working closely with the government. Although identified as focused upon replacing Typhoon at some point, the reality is that leveraging the Typoon-F-35 dyad is really the point.

And the evolution of the effectors flowing form this dyad in my view will define what comes next in terms of a fighter aircraft. The potential advantage which the UK has comes through its two, coalition developed and operated aircraft.

On the one hand, Typhoon allows for reachback into the continent and working relationships with Italian, German and Spanish industry. And provides ways to work with the Franco-German FCAS imitative.

On the other hand, the F-35 global enterprise fits much better the “Global Britain” thematic which comes out from the Brexit dynamic.

As sense of what Team Tempest is about was provided by an announcement of a Team Tempest Industry Day in Farnbourgh.

Companies from across the UK defence industry came together in the first opportunity for suppliers to engage with the Government and Team Tempest partners over the future of Combat Air System development in the UK.

The event in Farnborough was launched by Minister for Defence Procurement, Stuart Andrew, and saw 300 delegates including SMEs and technology-led organisations attending to build connections and take part in a series of briefings outlining the capabilities and skills needed to shape the future of Combat Air System delivery in the UK.

The Tempest programme aims to harness and develop UK capabilities that are critical for Next Generation (NextGen) Combat Air capability and to retain the UK’s position as a globally competitive leader through understanding of future concepts, technologies and capabilities.

Hosted by Team Tempest (a co-funded technology initiative bringing together the Royal Air Force Rapid Capabilities Office, Dstl, DE&S, BAE Systems, Rolls Royce, Leonardo and MBDA) and facilitated by ADS, the event offered a briefing for UK industry to better understand the Tempest programme and its role in supporting the UK MoD’s Combat Air Strategy and was followed by a separate, classified briefing.

“It is great to see Team Tempest reaching out to the wider UK industry and ensuring this important project is a genuine national endeavour. The UK has world leading capability and a diverse range of businesses with the experience and expertise to support this important work.”

Obviously for a post-Brexit Britain, the financial and working relationships necessary to achieve a broader global success will be challenging.

And the launch of Team Tempest around a next gen fighter model was nice, but I would argue also perhaps a bit ahead of itself.

I would argue that the Typhoon-F-35 dyad and leveraging that dyad through innovations in weapons, remotes and training will be the key definer of the way ahead.

This would suggest that perhaps complementing or supplanting Team Tempest might be a UK focused Plan Jericho.

The brilliance of the Aussie Plan Jericho launch was precisely because it was NOT technology centered. It has been focused on how to build a fifth-generation force; how to build an integrated, fifth generation enabled force. It is con-ops oriented interactive with considerations of technology and organizational innovation.

Precisely because the carrier is a disruptive technology and seriously challenges the UK’s ability to integrate air-sea and insertion forces, and certainly raises fundamental questions with regard to how the civilian leadership will use such a capability in a crisis, the focus needs to be on how to manage a way ahead with the 0-5 military or rolling FYDP as the military builds near term capabilities which prepare it fight more effectively rather than more graphics or mock ups on what the next generation fighter might look like.

The blunt fact is that the next two decades of leveraging the F-35 global enterprise will be a key driver in whatever comes next.

And frankly, neither I nor anyone else really knows where the successes and failures will be and the openings which will have to be filled in real world combat.

For the full report on UK and Australian defense transformations, see the following:

Australia, the UK and Shaping a Way Ahead for Military Transformation

For an e-book version of the report, see below: