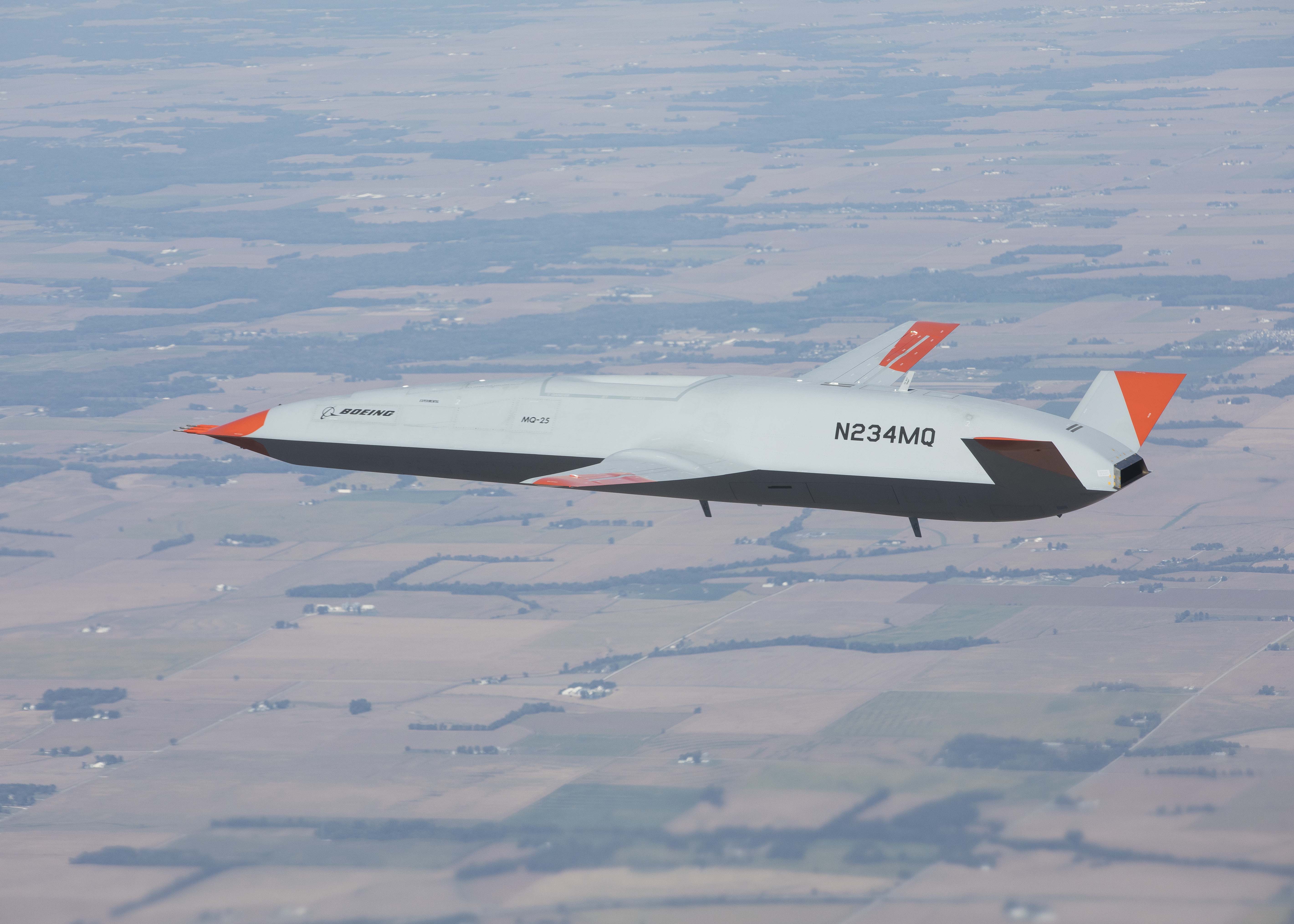 In my recent interviews with the senior officers working at the Naval Aviation Warfighting Development Center or NAWDC, it is clear that there is a major shift in training for and shaping the way ahead for the air-maritime force.

We have visited NAWDC twice before doing these interviews and the shift over the past few years is dramatic.

The shift has been from traditional CSG training to what I have coined the rise of the integratable air wing.

In my discussion with the Navy Air Boss, Vice Admiral Miller, we discussed the shift. What is underway is a shift from integrating the air wing around relatively modest and sequential modernization efforts for the core platforms to a robust transformation process in which new assets enter the force and create a swirl of transformation opportunities, challenges, and pressures.

How might we take this new asset and expand the reach and effectiveness of the carrier strike group?

How might it empower maritime, air, and ground forces as we shape a more effective (i.e. a more integratable) force?

One of the examples which we discussed was the coming of the MQ-25 or the Stingray.

“Vice Admiral Miller provided several other examples of how this shift affects the thinking about new platforms coming onboard the carrier deck. One such example is the new unmanned tanker, the MQ-25.

“The introduction of this new air asset will have an immediate effect in freeing up 4th gen fighters, currently being used for tanking, to return to their strike role. Even more importantly from a transformation perspective, the MQ-25 will have operational effects as a platform which will extend the reach and range of the CVW.

“But MQ-25 will be a stakeholder in the evolving C2/ISR capabilities empowering the entire combat force, part of what, in my view, is really 6th generation capabilities, namely enhancing the power to distribute and integrate a force as well as to operate more effectively at the tactical edge.

“The MQ-25 will entail changes to the legacy air fleet, changes in the con-ops of the entire CVW, and trigger further changes with regard to how the C2/ISR dynamic shapes the evolution of the CVW and the joint force. The systems to be put onto the MQ-25 will be driven by overall changes in the C2/ISR force. These changes are driving significant improvements in size, capability, and integration, so much so that it is the nascent 6th gen.

“This means that the USN can buy into “6th gen” by making sure that the MQ-25 can leverage the sensor fusion and CNI systems on the F-35 operating as an integrated force with significant outreach.”

I have had a chance to continue this discussion about the coming of the Stingray with officers at NAWDC.

And this impact can be seen in no less than three warfighting programs at NAWDC.

The first is the school where Stingray “will report” when it becomes operational,

“The cluster of innovation with the coming of the MQ-25A is being led by the transition from the legacy Hawkeye to the Aerial Refueling modified E-2D (AR) Advanced Hawkeye, which provides a game changing capability to a carrier air wing through advanced sensors & C2 networking capabilities, persistent presence, and greater operational reach.

“As the cluster evolves, the notion of a platform-centric functional delivery of airborne early warning and battle management shifts to a wider notion of providing support to the distributed integrated combat force which flew off of the carrier and adjacent capabilities working with the air maritime deployed kill web.”

The second is the impact of MQ-25 on other assets being used in the SA and strike efforts generated from the sea base.

Recently, I had the chance to talk with CDR Jeremy “Shed” Clark, Senior Leader at the Naval Rotary Wing Weapons School (SEAWOLF) at NAWDC. The Seawolf School focuses on Romeo, Sierra, and Fire Scout training, with Romeo being the sensor rich ASW/SUW/EW and related tasked focus helo onboard the Navy’s large deck carriers.

And why would one mention the Stingray in relationship to the Rotary Wing Weapons School?

“We discussed the coming of the MQ-25. The Romeo community is already looking at how having sensors onboard the MQ-25 can expand the reach and range of what the Romeo’s onboard sensors can accomplish for the maritime distributed force.

“It is also the case that as sensor demands currently made on the Romeo can be shifted elsewhere.

“The Romeo can refocus its task priorities and enhance its contributions to broader mission sets such as ASW and to focus on contributing capabilities that other platforms within the strike group are not prioritized to perform.” The third is the MISR school, or the Maritime ISR school.

Here NAWDC is training officers to provide for ISR knowledge guidance to the fleet and within fleet commands. They are not platform specific, so whatever contribution MQ-25 will make will flow into the MISR knowledge zone for management.

And it is not just about NAWDC but the joint force as well.

One example is a recent discussion I had with officers at USMC Aviation headquarters.

Here we focused on new ways to work the amphibious task force for sea control and sea denial and changes to the Viper attack helicopter which could allow it to work differently with Seahawk.

And because Seahawk was going to operate differently because of the coming of the MQ-25 this could flow down into new capabilities for the L-class ships configured as an amphibious task force.

To be blunt, if you had a traditional kill chain approach you would not be looking for these kinds of cross cutting synergies.

But not only are they there, but a new approach to working with industry, and leveraging software upgradeable platforms can accelerate the crafting, enhancing and extension of kill web capabilities.

Recently, I had a chance to talk with a senior Boeing executive involved with the Stingray program. We had met earlier, when the Second Line of Defense team visited the Boeing plant in Philadelphia to talk about Osprey and learn from the Boeing team how they approached design and manufacturing issues involved with the program.

Since that time Kristin Robertson has become vice president and general manager of Autonomous Systems within Boeing Defense, Space and Security, where her division focuses on autonomous technologies, intelligence capabilities and networking solutions from sebed to space.

From my point of view, the key point is how Boeing is working with the US Navy in a new way to deliver a kill web product.

The MQ-25 is one of three US Navy rapid acquisition programs, and it is clear that the core function of the MQ-25 is to do fleet tanking and that is the core mission priority.

But as highlighted earlier, being able to do that means as well as that the question is how to leverage the operational envelope of the MQ-25 to add other module capabilities, notably, in the C2/ISR world.

According to Robertson, the US Navy has been clearly focused on building the MQ-25 baseline in such a way that ability to grow capabilities is inherent in that baseline.

“We know we have to be a tanker first and we’re on track.

“The program has been very successful with the development program on track, on schedule.

“We have built significant margin into the baseline.”

And unlike Triton, the MQ-25 flies at altitudes where it has to be able to work with commercial and other piloted aircraft in the airspace as well.

This means that the aircraft clearly needs to have significant maturity to operate in a more congested airspace compared to Triton which is almost a LEO.

What this highlights is the importance of what new platforms can do.

Even though discussions of C2/ISR often focus on platform agnostic discussions, in fact, getting new platforms right to provide for a wider array of C2/ISR capabilities is crucial.

The MQ-25 is a case in point where the engine, the materials technologies, the navigability, the ability to work with various elements of autonomous systems whether in remotely piloted aircraft or manned aircraft, all are required to conduct the core mission and contribute seamlessly to C2/ISR and strike enablement missions.

The design of the system is built around an open architecture which allows for very flexible upgradeability over time.

And part of this approach to upgradeability is clearly to be able to add third-part applications when the US Navy deems a particular app as crucial to their mission sets.

A significant change which I have observed at NAWDC, Nellis or MAWTS-1 is that the military teams are a key part of shaping the development process.

This has been largely neglected in analysis of innovation being affected by today’s Navy and Marine Corps but is clearly on the way.

The MQ-25 program has picked up this important dynamic of change within which the Boeing and Navy development teams are tapping into operator judgements about shaping a way ahead for the platform as well.

Robertson underscored: “The whole idea with rapid acquisition programs is the need to build in early learning and then roll what is learned into the next phase of program development.

“The Navy is working to shape new ways to validate and verify program results differently to get the kind of innovation they want and to do so more rapidly as well.

“They are taking calculated and deliberate approaches to shape a way ahead.”

Recently, I spoke with Rear Admiral Rich Brophy, Commander NAWDC, and he underscored that “the Navy was building some solid footholds on quickly shaping the maritime kill web force from innovation, to integration, to training.”

And he sees this as crucial for the way ahead for the Navy, the joint and the coalition force.

Clearly, the MQ-25 program is one such foothold on the path forward.