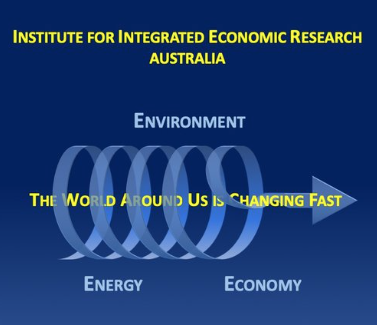 My colleague Air Vice-Marshal (Retired) John Blackburn has been focused for some time on the importance for Australia to pay close attention to supply chain robustness issues.

He started by focusing considerable attention with regard to challenges associated with fuel security, and then moved to questions of ensuring effective maritime trade security.

Along with his colleagues, he has formed The Institute for Integrated Economic Research-Australia which he chairs.

The Institute was founded precisely to deal with the underlying issues which have been exposed during the recent Coronavirus crisis.

I am a research fellow with this Institute and recently I had a chance to talk with Blackburn and another Research Fellow with the Institute, Ted Goranson.

Goranson is a former senior research director for the US Intelligence Community. He is a Research Fellow at IIER-A and Deputy Director of the Institute for Integrated Intelligent Systems of Griffith University.

When at DARPA, he advised the Manufacturing Technology Office which catalyzed the last major advance in enterprise information infrastructure.

A core concept developed by the team is the importance of shaping smart sovereignty which is about enhancing Australian resilience and shaping effective partnerships with trusted suppliers as a key way ahead for Australia.

Obviously, this is not just an Australian concern, but shaping a way ahead by Australia could prove to provide an important stimulus for change among the partners of Australia, including its key liberal democratic partners, in particular.

According to Blackburn: “If we think of ourselves as node in a reformed global manufacturing supply system.

“We would focus on those national capabilities that are essential in the times of the global crisis. But obviously, we would not do this alone.

“If we can make ourselves more resilient, we would do that within our region as well.

“It’s not just about us, but the end result is that we would become a node in a more resilient manufacturing and support network.”

In other words, the approach would be to carve out a new approach that doesn’t necessarily reject working with authoritarian states but providing more resilience for ourselves as liberal democracies.

Blackburn added: “We should focus on smart sovereignty and trusted supply chains, which would yield a new smart globalization model. It’s not just us. Each country needs to look at this, needs to look at how they team and work together with trusted partners.

“We’ve ended up in this situation as a result of bad analysis, bad situational awareness, and the assumptions we’ve made, so we need to shift to a smarter way of doing business.”

But how best to start the process?

The Institute is generating a number of practical ways to shape a way ahead for smart sovereignty and one of those ideas is for the Australian government to create and fund a new Australian Enterprise Information Infrastructure Research Centre.

Ted Goranson has generated foundational thinking about such a Centre and discussed his basic approach during the interview.

“We’re ready for a generational shift in enterprise infrastructure.

“Enterprises have been improved by widespread use of computer technology. And this past productivity gain that we’ve gotten was by driving lean, globalized, distributed supply chains, which had the unfortunate byproduct of allowing authoritarian regimes to come in and capture huge portions of the supply chain and intellectual property.

“But in the process of building this global model, the key values for innovation have been driven further down into the supply chain, rather than residing with the global enterprises. Information technology has been a key driver of this transformation of the supply chains, and the relocation of innovation within those supply chains.”

Blackburn noted that we have lost control of a number of key technologies with the devolution which Goranson highlighted, such as in the medical supply chain.

Blackburn and Goranson argued that by gaining better control of your supply chain you can drive wide-ranging innovations in not only your country but among your trusted partners.

Goranson argued that, in effect, one needs to build a new vision of the enterprise where software, hardware and information are working together to shape new approaches to management of the deliverables which are shaping the national economic future.

Being able to integrate across what have been viewed as the lower ends of the supply chains can be captured and drive broader innovation.

Goranson argued that a government-funded research centre which could shape a new enterprise information management approach could provide intellectual leadership.

And it is crucial that the Australian government involve the key economic sectors in Australia, such as agriculture, food distribution and mining, in shaping a new approach.

Such a focus on innovation would drive change in a key sector like defense as well.

In a white paper by Goranson, he conceptualized the transition as follows:

Goranson explained his graphic as follows:

The enterprise information architecture we’ve used for the last 20 years is based on coherent, unified models. Goals are to coordinate a global supply chain, making things as lean and cheap as possible within reasonable quality.

Because the defence enterprise is so much smaller, it inherits these values and technologies.

Blackburn concluded: “In times like this, it really opens up the bandwidth to talk about a series of challenges which we have ignored.

“But identifying a challenge is not a way ahead.

“We need to think about what practical things are that governments can do, because in a market-driven economy, there is a boundary as to what they can do in setting out market conditions or enhancing it.

“Creating a government funded Enterprise Information Infrastructure Research Centre could provide leadership to generate ideas and host debates about solutions which can nurture change in both enterprises and in public policy.”

The Central Role of IT and Communications in an Australian National Security Strategy: The Perspective of Air Vice-Marshal (Retired) John Blackburn

The Institute for Integrated Economic Research-Australia: Our Latest Global Partner