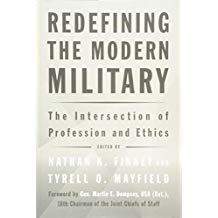 This book addresses the evolution of military professionalism and the role of the military in the liberal democracies over the past two decades.

This means that the book really is addressing the question of what the demand side of the land wars in the Middle East and the global war on terrorism means from the standpoint of the judgement of what the military does and what being a competent professional means in this period of history.

As great power conflict returns, there is a major shift in what will be expected in order for the professional military needs to do to succeed in deterrence and in case of conflict how to prevail.

What indeed are the relationships between how the military profession has been reshaped to deal with counter-insurgency and the global war on terrorism and what the successful military officer in great power conflict needs to do to lead his or her forces to success in crises?

The book addresses the dynamics of change in military professionalism but there needs as well to be a significant look at how the civilian state of the relationship with the military can live up to its side of the bargain.

If we are to prepare to defend our interests against the authoritarian powers, it will be crucial to find ways to shape a new bargain between the military and its civilian leaders with regard to how to think about and conduct crisis management.

Unfortunately, the shift the military has undergone in the past twenty years is not an answer to what that bargain needs to become.

There are three key issues.

First, civilian leaders are less familiar with military issues as conscription has gone away and professionals are given the task to fight far away from the homeland.

The strategic corporal of the former commandant of the USMC General Krulak in his envisaged three block war has become a reality not just for the land wars, but with the evolution of modern technology even more so in terms of the speed and significance of tactical engagements having strategic meaning.

Third, the way the first trend has combined with the second trend has been for civilian leaders to craft tight rules of engagement which may make sense back in a capital like Washington but make little sense in a fluid tactical situation with strategic consequences in an extended and fluid battlespace.

To deal with this challenge, it is not just the military profession which need to be rethought but the civilian leadership which is losing any real understanding of what combat operations are and how technology evolves to enhance those capabilities, and not just provide options for some future world debated in so-called think tanks.

The book provides a good starting point for thinking through where we need to go in the decade ahead; it certainly is not where we have lived since 9/11. and the conduct of the endless war.

The editors makre a crucial point at the end of their book:

“One clear result of this shift away from conscription to a technologically focused force is that fewer and fewer members of society — the very population with which the military must maintain trust — have an personal connection with the military or any exposure to conflict in a meaningful way.”1

This is an explosive cocktail both for the civilians who are not really capable of understanding how to think about how to use military force in an effective manner or the evolution of the military to play the strategic partnership role with 21st century effective civilian leadership which great power conflict requires.

In a chapter on the evolution of the training of naval officers, William M. Beasley, Jr. underscores his concern with training become narrowly stove-piped and technical with the real inability to learn how to be strategic leaders.

From my point of view, given the shift back to great power conflict we clearly need change on both the civilian and military side to reshape strategic instincts, thinking and aptitudes.

“The Navy must do some serious soul-searching about its technical, platform-centric mind set.”2

But not just the Navy; the failed civilian class and its inability to terminate the endless war means we need to take a good look in the mirror and figure out how to master the use of military power for political objectives against the big boys, like chess-master Vladimir Putin.