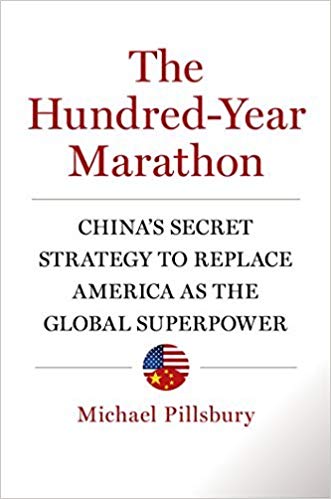 The book by Michael Pillsbury on the Chinese challenge to the United States is an important one.

It could be recast into a broader thematic which is how will the liberal democracies compete with, negotiate with and proactively position themselves for a successful competition with modern authoritarian states?

It is not so much that these conclusions were premature; they were and are delusional.

The challenge we now face is to deal with key authoritarian states with global reach, their coalition dynamics, and their reach deep within our societies due to their economic, information and cultural reaches.

When one sees, Cuba, Russia, China and Turkey involved in protecting the thug regime in Venezuela, one clearly is confronting the global reality of global authoritarianism.

Of course, the liberal democracies could do the reverse and reach deep inside Russia, Turkey, or China and generate internal pressures, but certainly not yet as a strategic approach.

This is an approach which the late Danny Lam proposed and we have brought together his thoughts and ours with regard to how such a strategy might be both articulated and shaped.

What Pillsbury does in his book is to provide a very interesting look at the interactions between the thinking in the US and Chinese strategy and such interaction is at the heart of any real change in US strategy.

His core thesis is very clear: The Chinese leadership sees itself in a long range competition with the United States and is using a variety of tool sets, well integrated to achieve global dominance.  These efforts include economic power, strategic deception, espionage, cultural penetration, buying off of elites in liberal democratic states, and shaping a military force able to exert pressure on choke points in the Pacific and eventually beyond.

How can the US address the nature of a Chinese authoritarian challenge?

And the Chinese leadership approach is clearly leveraging whatever the liberal democracies will give them to assist them in the ability to become the dominant global power.

Pillsbury went to Columbia University a few years prior to me; I had some of the same professors on Chinese studies as he did but some he did not.  The preoccupation with Mao and China’s Cultural Revolution was a cottage industry at the time, which had become an adjunct to the 1968 revolution in the West and the interpretations generate thereafter.

I learned a great deal form A. Doak Barnett and my Chinese history professor, Professor Wilbur and ended my time at Columbia studying with Andrew Nathan.

A key problem facing area studies in the universities is the focus on learning the area and often ignoring the case study dimension of what area studies can yield.

I also studied with Dr. Brzezinski who was consummate case study thinker who could relate a specific global case study or dynamic to a broader strategic thought process.

For me, that is what the Pillsbury book provides.

It is both a look at the way ahead as seen by China Hawks and leaders as well as how Americans have interacted with the various Chinese dynamics.

It is as well a case study in coming to terms of a global authoritarian state.

How do we counter them?

How do we balance them?

How do we focus on them realistically without demonizing them?

How can we leverage the Chinese opening to in fact pressure their society to be more congenial to our interests?

How to not lose a sense of reality and to avoid the constant mirror imaging we do when discussing authoritarian societies?

How to put reverse pressure on the Chinese leaders while pressuring them for change?

How to embrace Taiwan and reform in the Confucian tradition as a counter to Chinese Communism?

Recognition of the challenge is clearly the beginning of wisdom.

But this is very difficult for Westerners.

When we look back at the 1930s, one is struck by how clear Hitler was about what he was about; much clearer than Stalin who used the West’s attraction to Communism as a tool to aid and abet the Soviet Union to augment its influence in the West.

It is pretty clear that it was difficult then to intellectually deal with how different these societies, and how their thought processes were different and not just variants of how global modernization was going to play out.

A key element of how both Germany and the Soviets addressed the West was spending a lot of time and effort courting elites in the West and convincing them of their benign intentions and the legitimacy of their approach.

Hitler’s constant drumbeat of reversing Versailles is repeated by the Chinese in their constant reminder of the suffering they went through during the period of Western imperialism.

My French father-in-law when he was youth attended the 1938 Exposition in Paris.  He was much attracted to the German exhibit, which did not highlight Hitler at all but highlighted German industry, innovation and intellectual prowess.  The building was designed by Albert Speer and represented to the French the revival of Germany.

The point is that a global propaganda outreach for the authoritarians is a core element of their diplomacy and military strategies.

It is no different from the Chinese today and their Confucius Institutes or courting of Western think tanks.

Some Americans, who enjoyed being superpower leaders because they were countering the Soviets, are now enjoying the thought that the Chinese and the US are in the process of becoming such leaders of the new global order.

And indeed as Pillsbury discusses in his book, the Chinese have proposed this to the United States, and strategists who long for the good old days of global leadership or naïve US politicians who really have spent little time dealing with the mundane dynamics of global change might find this attractive.

But this comes at a cost.

Recently, I participated in a meeting where a prominent Chinese American expert and a prominent American Chinese expert presented in a joint session.

After the meeting a colleague from neither country commented to me:

“Listening to the assurances from the Chinese official reminded me of how Secretary Hull must have felt on December 7, 1941 after weeks of Japanese assurances.”