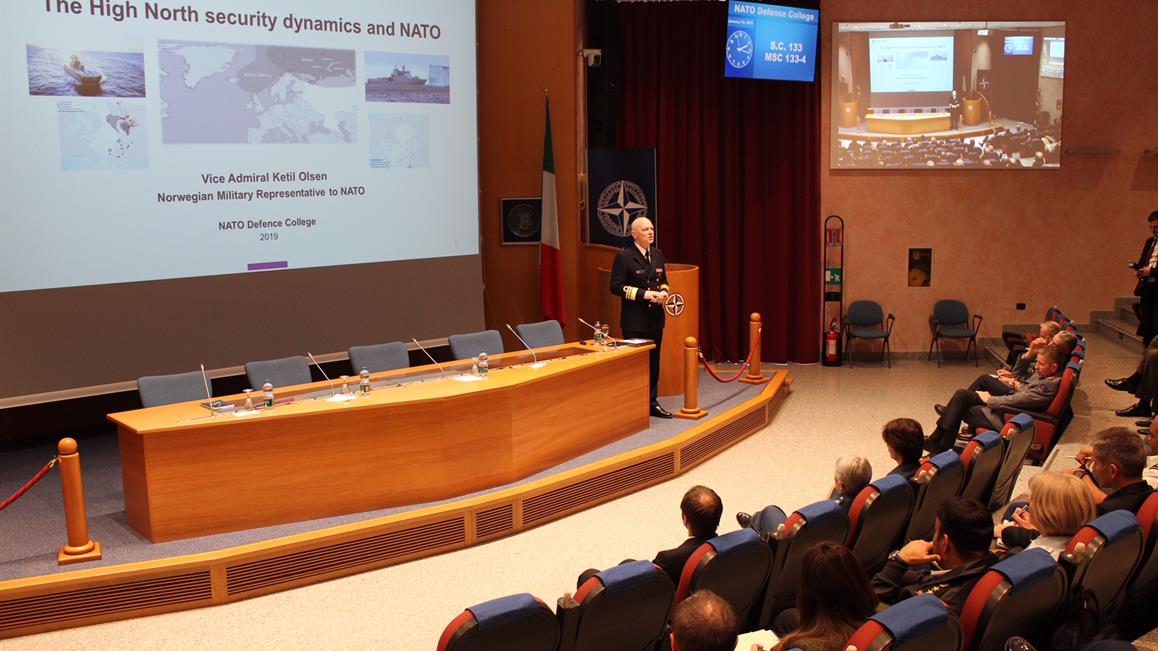 The global security dynamics are changing rapidly, influencing also the regional security environment including in the Arctic and the High North.

This was the background for a lecture by Vice Admiral Ketil Olsen, the Norwegian Military Representative to NATO at the NATO Defense College (NDC) in Rome, Italy recently.

“A very good briefing about NATO and the Norwegian military perspectives on the High North.

“The presentation was well in line with the curriculum at the College and in accordance with the NATO 360-perspective”, says John Olav Fuglem and Kenneth Øvland.

The two Norwegian students were two out of 67 from 30 different countries attending the senior course this year.

According to the two Lieutenant Colonels, it is of utmost importance that high ranking officers in the NATO Headquarters, like Olsen, come to Rome and the NDC to present their field of expertise or area of interest, and also having a dialogue answering questions from students.

“Mostly, the external lecturers at the NDC are civilian academics (professors and doctors) presenting NATO from their academic point of view.

“Having a NATO officer presenting a more military view, was very well received and highly appreciated by the students.”

The Norwegian ambassador to Italy, Margit F. Tveiten, was also present and assessed the briefing as an important contribution to broadening knowledge about developments in the Arctic, NATO’s role, the actors and Norwegian perspectives.

“I believe it is essential that the entire NATO family have the best possible knowledge about the High North, and that such dissemination of Norwegian knowledge and Norwegian assessments, based on the Vice Admiral’s experience from Brussels, is essential.

“There is a lot of attention to the north area, but there are also many misunderstandings.

“Olsen’s contribution was therefore important to the NDC.

“The questions afterwards raised by the students, underlined the importance of the lecture and was interesting from several perspectives”, she stated.

At the NDC, Norway also holds the position of a faculty advisor, currently owned by Norwegian Captain Helge Martin Tonning, as of August last year.

One of his tasks is to put together a relevant course program.

“It is important to give the course participants an updated and current picture of the security environment, relevant to NATO, when developing the curriculum.

“The program for them is dynamic, reflecting the global security dynamics and also forecasting the future relevant to the Alliance.

“The brief from the Vice Admiral was therefore highly appreciated”, Tonning says.

Published on January 24, 2019 by the Norwegian Ministry of Defence.