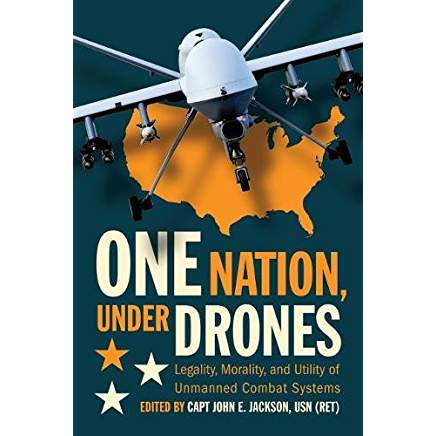 One Nation, Under Drones is a compilation of essays (edited by Captain (Retired) John E. Jackson) that addresses a very important topic of our day: how will drones have changed and will continue to change modern warfare?

While the book addresses an incredibly complex issue, it does so in a manner that is extremely accessible and easy to read.

Jackson’s selection of essays exposes the many facets of drones and dives into the issue from an ethical, moral, legal and even technical perspective- providing readers with a holistic perspective on the evolving subject.

Autonomous weapons “herald perhaps the most fundamental change in warfare in generations”[1]giving the topic that much more importance.

The main concern presented throughout the chapters – and some authors come to different conclusions on the issue—is whether or not the autonomous weapon is able to distinguish civilian and military objects.

Is a drone able to see the difference between civilian and military (especially when many terror groups are not marked with proper uniforms)?

In the chapter titled Autonomous Weapons and the Law written by Christopher M. Ford, he concludes that “the law of armed conflict is adequate to regulate autonomous weapon systems that currently exist or will likely exist in the near future”[2] but emphasizes that there are very specific steps the military must take in order to ensure the lawfulness of using said machinery.

While Ford provides the framework in which these drones can be used, Ron Arkin in his chapter titled, Lethal Autonomous Systems and the Plight of the Noncombatant brings up the point of the almost “moral imperative for the robot’s use”[3].

Arkin, like Ford and others, emphasizes the need to provide very specific circumstances in order to ensure the safe and efficient use of these machines.

Arkin also underlines that the use of these drones could reduce the cost of human life on the battlefield remarkably. Arkin claims that drones can be used in a self-sacrificing manner and present no need for self-preservation, unlike when a real soldier is placed on the front lines of war.

A soldier will go into battle with a more “‘shoot first, ask questions later’ approach” while drones will approach the situation with a “‘first do no harm’ strategy… robotic systems can truly assume risk on behalf of the noncombatant, something that soldiers are schooled in, but that some have difficulty achieving in practice”[4].

Other chapters within the book, such as Drones: The Science Fiction Technology of Tomorrow is Already Here Today by Konstantin Kakaes and P.W. Singer bring up the challenges policy makers face when confronted with this novel technology.

One aspect of this is purely air safety:

“Airliners are increasingly reporting drones flying in airspace where they are prohibited, as in a July 2015 incident at the Warsaw airport when the pilots of a Lufthansa regional jet said they nearly collided with a drone as they coming into land[5]” this increasingly brings attention to questions such as “Who should be allowed to operate the systems and with what training or licensing? Ought airspace be segregated?” these issues raise “difficult questions about the balance between freedom and security”[6].

One Nation, Under Drones provides readers with a complete picture of the challenges (as well as achievements) that this technology is bringing to the 21stcentury.

Drones are increasingly blurring the line between the private and public sector and creating a grey area for the civilian and military world that is proving difficult to define unless we have an intellectual framework to shape our understanding. This book makes a significant contribution to this challenge.