During my recent visit to Copenhagen, I had a chance to meet with Admiral Torben Mikkelsen. We discussed the way ahead for the Danish and Nordic maritime forces in shaping enhanced capabilities for the defense of the Nordic region.

But he also kindly gave me a copy of his book on the Operational Removal of Chemical Agents from Syria, 2013-2014. The book is called Two Hundred Days, and the book which was originally published in Danish has now been published in English.

Hopefully, the book will become widely available for it provides a very interesting case study of the challenges of navigating adversaries to shape a way to reduce a threat, in this case chemical weapons.

Obviously, the Assad regime was able with Russian support to keep a chemical arsenal, one which would later see a frontal U.S. strike from the U.S. Navy under the command of U.S. President Donald Trump. Earlier, we heard a lot about the red line under President Obama, but it was only under President Trump when the United States put down a real world marker with regard to the actual use of such weapons.

We face such a threat again, but now in Ukraine. Here it is not clear how the Western countries would respond.

The book provides a very interesting examination of the evolution of the Danish Navy away from the direct defense of the Nordic region towards a global engagement, notably in anti-piracy missions.

Now the Danish Navy will take that experience back into shaping a way ahead for extended Nordic integrated defense.

The book is written around the diaries of the Admiral which he generated during his time in charge of the mission.

He concluded his book with these words:

“Being able to understand the strategy and the tactics and combing the military needs with the overall strategic foundation was a very interesting challenge…This was not an action-packed mission with a lot of kinetic action, but a mission where the leadership was also challenged with ensuring the force was prepared for ‘what if’ situations. And ‘just’ waiting for something to happen is not always easy.”

A key part of the book is where he details the challenges of working with the Russians and the Chinese. In the Russian case, the disconnect between the local leaders with whom he had to work and their overlords in Moscow recalled Russian novels of how the Tsarist regime worked in the 18th and 19th centuries.

Admiral Mikkelsen made it clear that his mission was being conducted as the Russians were in the midst of re-asserting their global role.

And in the middle of their mission, the Russians invaded Crimea which created a mission altering event.

The Danes had a small contingent to provide a lead element to be able to pick up Syrian chemical weapons and move them from Syria for later neutralization.

The core Danish cadre for the operation was as follows: 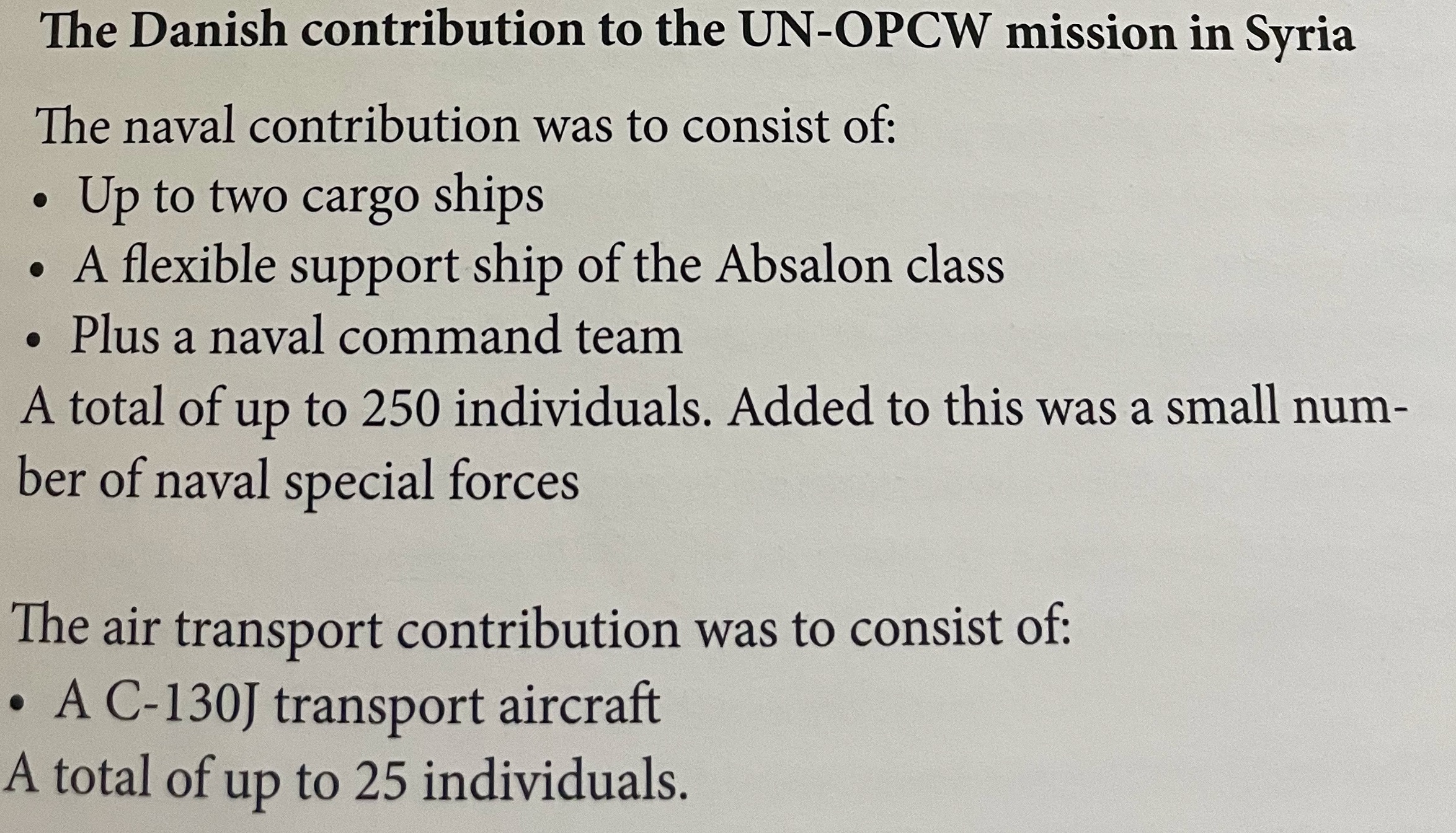 In short, the Admiral has provided insights into the challenges of working the implementation of agreements between our societies and those governed by authoritarian regimes.