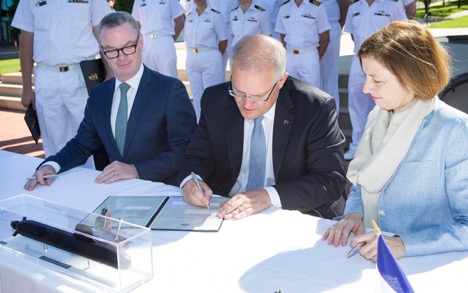 In late 2014, Australia was engaged in a vigorous national debate about whether 12 new submarines should be imported directly from Japan in a ‘captain’s pick’ or built here after some form of tender process.

In the heat of that campaign, I was invited as South Australia’s minister for defence industries to visit Rossi Boots, a footwear manufacturer in the west of Adelaide. Rossi was keen to do business with the defence and police organisations that had been importing footwear and kit from overseas.

As I toured the workplace, I was besieged by a group of mature-age skilled and semi-skilled workers, mainly women, who just wanted to talk about submarines. They had heard the debate and they understood the idea that government should, where possible, spend the people’s taxes in Australia, growing wealth and jobs in our own country.

It was no different to the challenge they faced. They felt their jobs were at risk because the government was buying from overseas and not from companies like Rossi. Whether it was boots or submarines, the issue was a barbecue stopper.

The success or failure of the $80 billion Attack-class submarine build may end up shaping the nation’s future attitude towards funding defence.

The arguably rushed selection of Naval Group as preferred designer was made on the cusp of the 2016 federal election to put the matter to rest.

To win that contest, Naval Group promised that ‘90% of the build activities will be performed in Australia’.

The Senate recently heard evidence that local content in the Naval Group build could be as low as 30%, and the Australian National Audit Office has revealed that the government’s Naval Shipbuilding Advisory Board questions ‘whether the programme risks outweighed the benefits of proceeding’.

On 13 February, national reports revealed that Naval Group Australia CEO John Davis ‘was unable to say whether the boats’ Australian industry content would reach 50%’ due to ‘cultural problems’ and ‘specific challenges’.

Davis was dismissive of the capability of Australian defence suppliers, saying that it was ‘falling short of expectations’.

Naval Group’s comments shocked many and resulted in a strong response from the government and the commentariat.

By 24 February, Naval Group’s executive vice president, Jean-Michel Billig, shifted the company’s position yet again when he assured a Senate committee that ‘we commit to a level of Australian industry capability that will have the effect of at least 60% of Naval Group contract value spent in Australia’.

The 70% mandated and achieved with the Collins class might have been an aspiration, but the idea of 60% is a welcome development, and one that will need to be formalised in contracts and measured and reported on by audit if there is to be confidence and certainty.

Too often Australian parliaments, industry, workers and taxpayers have heard assurances on local content only to later find a winding back at the contract stage.

Billig appears to be guaranteeing 60% of the ‘contract value spent’ for Australia, an important distinction.

Naval Group’s new position includes an indication that the company will ‘work to give Australia an even bigger cut of the contract than 60%’, which is an encouraging sign.

Questions will remain about how Naval Group will classify items manufactured overseas but assembled in Australia, how work done by French-owned subsidiaries with front offices in Australia and ABNs will be accounted for, and what investment and intellectual property effort will go into genuine partnerships and joint ventures between French and Australian companies.

The devil, as usual, will be in the detail.

Achieving these goals for the first batch of vessels may prove particularly difficult, suggesting that higher local content in later batches might need to balance out targets overall.

But it’s a start. If the government and Naval Group can sign up formally to this position both deserve credit.

Equal attention needs to be given to optimising opportunities for Australian universities, cooperative research centres, and industry centres of excellence to participate in this part of the spend.

The Senate could continue asking the same questions about local content of the Americans as have been asked of the French.

The Abbott government wisely acted to lift defence spending towards 2% of GDP. An array of commentators, authors and strategists are now advocating a budget closer to 3% for new capabilities in these uncertain times. It’s a whole lot easier for the defence minister to win funding in cabinet when ministerial colleagues responsible for employment, infrastructure, science, education and training, and regional development are on side, supporting the benefits of defence spending from the standpoint of their own portfolio aspirations.

And it empowers the prime minister at Council of Australian Governments’ meetings, where state and Commonwealth financial arrangements are hammered out, if he can demonstrate to premiers the many shared benefits of increased defence budgets to states because of local industry participation.

We need to keep reminding ourselves that the money which funds defence capability acquisitions belongs to the hardworking families who pay taxes. They keep a close eye on how the government spends that money. They don’t like seeing waste, mismanagement or money flowing overseas to create jobs, intellectual property and enterprise in someone else’s country if we can build the capability at home and reap the associated benefits.

If the public don’t like what they see and won’t vote for it, expect trouble securing funds in the future for defence.

It’s very easy to cut the number of overseas-manufactured submarines from 12 to six, or to reduce the number of foreign-made aircraft or armoured vehicles and to invest that money on alternative here-and-now priorities like health, education or infrastructure, no matter how urgent our future strategic circumstances may seem.

Defence decision-makers should see their choices not in terms of operational capability versus local industry participation.

Local industry and the university sector are Defence’s friends, not its enemies when it comes to funding.

We need to be able to both walk and chew gum.

Capability must always come first, but without the shared benefits of high levels of local involvement by universities, workers, small and medium enterprises, and state and local government, we risk losing community support.

It then becomes a question of whether the taxpayers are prepared to keep paying the bills.

That’s why making sure that the Attack-class submarines have the highest possible level of local content is so important and why the program is being watched so intently.

It’s a test case. If we fail, future defence budgets are likely to face renewed public and parliamentary scrutiny.

As importantly, what message will we be sending to our children and grandchildren about our national ambition and our future?