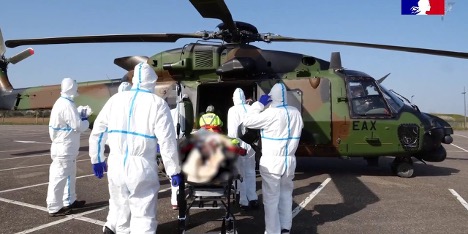 With passenger traffic ramped down significantly, civilian airlines are providing enhanced freighter support during the current phase of the Coronavirus crisis.

In addition, in Europe, notably in France, military airlift has provided targeted capabilities to support emergency airlift as well.

Pierre Tran has highlighted this development in his coverage from Paris.

In a March 26, 2020 story he highlighted the French government and how it is using the military to provide support in the crisis.

In a March 19, 2020 story, he noted the first French Air Force flight providing lift to support the government’s efforts in the crisis.

On March 18, 2020, the French air force flew six civilian patients severely hit by the deadly coronavirus in an A330 MRTT military transport jet fitted out with an onboard medical evacuation unit, the armed forces ministry said.

That was the first time the service flew its airborne hospital unit, dubbed Morpheus, in a domestic flight as the module was used to fly wounded personnel to France from distant overseas deployments.

The modular units, previously fitted on the C-135, can be equipped for intensive care as well as lighter medical conditions.

The A330 multirole tanker transport aircraft flew from Mulhouse, eastern France, and landed at Istres airbase in the south, allowing the patients to be transferred to military hospitals in Marseille and Toulon, the ministry said.

The military flight was ordered to lighten the load on hospitals in eastern France, one of the hardest hit regions, with the public health authority registering March 17 1,820 cases of coronavirus in that part of the country.

On March 21st, the French Air Force flew a second flight of the A330 MRTT equipped with the Morpheus flying hospital unit, flying six patients to Bordeaux from Mulhouse.

The first medical flight of the A330 MRTT took place two days before, flying six patients from Mulhouse to Istres airbase, south of France.

The French air force has added a second Falcon jet to its medical evacuation flight, which now comprises six pilots and two cabin teams, a Falcon 2000LX and Falcon 900, the service said. The transport squadron flies that emergency service.

The airborne medical squadron has been stood up in response to the coronavirus pandemic.

Those flight crews are trained to fly in conditions of nuclear, bacteriological, chemical and radioactive warfare, with the staff wearing protective gear and the aircraft disinfected. The pilots can fly with protective masks and gloves.

A crew from that squadron flew March 18 the A330 MRTT which brought six patients from Mulhouse, eastern France, to the south of the country.

In a story published on March 29, 2020, he highlighted Franco-German cooperation during the crisis.

“The French and German armed forces are working together to fight against Covid-19,” the ministry said in a statement. “This cooperation shows the solidarity of the Franco-German friendship.”

Armed forces minister Florence Parly spoke March 27 to her German counterpart, Annegret Kramp-Karrenbauer, on the virus crisis and the two ministers agreed on measures to help hospitals in northeastern France, the ministry said.

That flight was part of Operation Resilience, a broad military mission seeking to lighten the load on civil authorities across France, heavily hit by the pandemic.

The army light air wing rapidly adapted the NH90 for the medical mission, which allowed evacuation of patients under intensive care, the ministry said. The NH90 also flew March 28 patients to Geneva, as Switzerland has offered assistance.

The army has adapted the NH90 to carry virus patients under intensive care. The helicopter will carry two patients under oxygen, and a crew of seven or eight. There will be a pilot and a flight commander, a flight engineer, a flight specialist in the hold, one or two doctors, and two nurses.

“Just one word: thanks,” she said.

That was the first German military flight of French patients, regional paper L’Alsace reported. The operation took just under two hours to embark the patients before flying to Stuttgart. The patients were then taken to the military hospital in Ulm, southwest Germany, AFP news agency reported, the paper said.

In an article by Fred Vergnères on Helicopter Industry on March 31, 2020, the ALAT’s role was highlighted.

On March 28th, three transfers were administered at the benefit of six patients suffering from Covid-19. The transfers were carried out by two aircrafts from the 1st Regiment of Helicopter Combat (1st RHC) in Phalsbourg, in order to relieve hospitals in the East of France. Flights were carried out in the morning hours from Metz to Essen (Germany), and from Mulhouse to Geneva (Switzerland) in the afternoon. On Sunday the 29th, the same aircrafts were also used to evacuate 6 other patients from Besançon to Grenoble and Clermont-Ferrand; and from Metz to Essen in Germany. At the end of the daily missions, the two aircrafts left for Phalsbourg to undergo a complete decontamination phase.

And more generally, their readiness was highlighted to meet the demands of the French state.

For the General Staff, “these missions, and the air assets committed to them are used to meet the needs of the health services, and are carried out on the orders of the President of the Republic and the Ministry of Solidarity and Health“. The fact remains however, in the event of a crisis escalation the helicopter system could without problem be reinforced on other sites in the hexagon, from the Caymansbase at the CFIA – Centre de Formation Inter Armées – in Le Cannet des Maures and those of the 5th Regiment of Helicopter Combat (5e RHC) in Pau.

In an April 2, 2020 story published on Helicopter Industry, the role of the French Air Force and its helicopters was highlighted.

After the ALAT – Aviation Légère de l’Armée de Terre -, it is the French Air Force’s turn to use its heliborne assets. As of April 1st, the French Air Force set up a plot of three Caracals and six crews of the  EH 1/67 Pyrénées at the Villacoublay Air Base 107, south of Paris. Operations began just a few hours after the arrival of the machines, as two EC725s each transferred two Covid-19 patients from the Ile-de-France region from orly to Caen and Angers.

To keep up with the pace of the missions, the squadron will also operate the EC225, rented from RTE, for logistical purposes between the Cazaux base and the Villacoublay site. Two SA330 Puma from the EH 1/44 Solenzara should also reinforce the Paris operation in the coming days.

After ALAT (Aviation Légère de l’Armée de Terre) and the French Air Force, the French Navy (Marine nationale) is now joining the helicopters borne ressources deployed in the Ile-de-France region as part of Operation Résilience. A Caïman from Flotille 33F, initially based at Lanvéoc-Poulmic in Finistère, has been stationed at Villacoublay Air Force Base #107 since Monday, April 7.

The helicopter, which comes as a reinforcement of the Parisian device, could be used for logistical missions to transport equipment and personnel or even the medical evacuation of two Covid-19 patients…..

In short, military airlift can provide a compliment to civilian assets in moving patients or supplies to critical points in the response chain during the crisis.