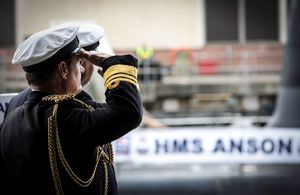 In a story published by the UK Ministry of Defence on August 31, 2022, it was announced that Royal Australian Navy crews will train on the newly commissioned HMS Anson and other Astute-Class submarines.

The Prime Minister and Defence Secretary Ben Wallace emphasised the importance of the deep defence ties between the UK and Australia, following the development of the trilateral AUKUS partnership working with the United States, who were represented today by their Defence Attaché Captain Leland.

Hosting Australian Deputy Prime Minister Richard Marles on his first official visit to the UK since the new Australian government came to power, the Prime Minister and Ministers attended the commissioning of the fifth of seven new Astute-Class Royal Navy submarines, HMS Anson.

With naval capability at the centre of the two powers’ future defence relationship, the visit reinforced the priorities of the Integrated Review and significance of the AUKUS partnership – which links the UK, the United States and Australia in promoting stability in the Indo-Pacific region.

The UK and US have already welcomed Royal Australian Navy personnel on its specialised nuclear training courses, and more will follow next year, before Australian submariners go to sea. The training and exchanges mark the beginning of a multigenerational naval partnership between the three AUKUS nations.

“HMS Anson is the perfect example of where levelling up the UK and generating jobs, skills and growth across our country goes hand-in-glove with Global Britain.

“From the Pacific Ocean to the Baltic Sea, our submarine service is protecting the UK and our allies 24 hours a day, seven days a week, and the deployment of Australian submariners alongside our British crews epitomises the strength of the AUKUS partnership.”

“Today is a significant milestone in the UK and Australia’s preparation to confront growing threats to the liberal democratic order, especially in the Indo Pacific.

“Not only have we progressed our defence planning but Minister Marles participated in the commissioning of our latest attack submarine, on which will Royal Australian Navy submariners will be embarked as we develop our shared capabilities in the years ahead.

“Built in a UK shipyard, HMS Anson demonstrates the very best of British industry, sustaining our world-leading sub-surface capabilities and underlining the UK’s readiness to contribute them to shared security, especially with our closest allies Australia and the United States under the AUKUS initiative.

“One of the most sophisticated underwater vessels ever built, HMS Anson represents £1.3 billion of UK investment. Capable of defending the UK’s interests at home and overseas, HMS Anson will be armed with up to 38 Spearfish Heavyweight Torpedoes, and Block V Tomahawk land attack missiles, able to tackle targets at a range of up to 1,000 miles.”

Building on commitments made in the Integrated Review, the completion of HMS Anson demonstrates the strength of British industry and its world-leading nuclear technology that will be leveraged to deliver the trilateral AUKUS defence and security partnership between the US, UK and Australia.

“HMS Anson is the cutting edge in submarine design and construction, ensuring operational advantage in the underwater battlespace, the last great stealth domain.

“Given the world we live in, there is no more important tool in the United Kingdom’s arsenal: silent, unseen, and a key instrument of our global, modern, ready Royal Navy.”

In the last year 17,700 Defence jobs were supported through direct spending with UK industry in the North West. More than 11 years in the making and built in BAE Systems’ Barrow-in-Furness site, more than 10,000 coders, engineers, scientists, submariners and technicians across the UK were involved in HMS Anson’s construction. Powered by a Rolls-Royce nuclear reactor, the boat will be operational for 25 years without refuelling.

At 97 metres long, HMS Anson stands at around the length of two Olympic swimming pools, with 240 kilometres of cabling – enough to stretch from Barrow-In-Furness to its new home in Faslane, Scotland.

HMS Anson will remain in Barrow for the coming weeks while undergoing final checks and rigorous testing to the numerous complex systems that make up a nuclear-powered submarine, before sailing to HM Naval Base Clyde in Faslane to prepare for sea trials.

“The Astute class submarines are among the finest engineering accomplishments in the world. As the custodian of the UK’s submarine design and build capability, we’re incredibly proud of the role we play in the delivery of this strategic national endeavour.”

The UK has built and operated world-class nuclear-powered submarine capability for over 60 years.

Two further boats – Agamemnon and Agincourt – are in various stages of construction at BAE Systems’ Barrow-In-Furness site as part of £11.2 billion overall investment in the whole Astute-Class programme.