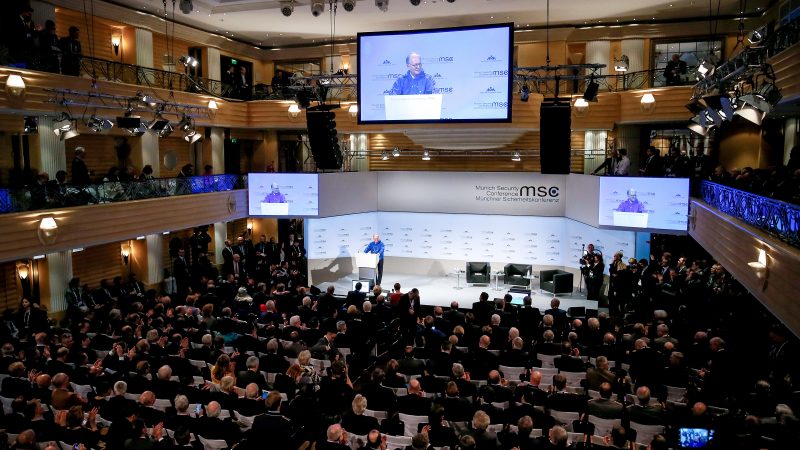 The recent Munich Security Conference was held shortly after I left Germany and provides a useful benchmark about conventional thinking about the global dynamics of change with regard to the security and defense challenges to the liberal democracies.

The report in effect is a statement about those states committed to the legacy global “rules based” order and how it can be preserved against the threats posed by Donald Trump, Putin, the Middle East explosions and other disruptive forces.

The efforts of the key European players are highlighted as crucial to keep the old order alive against the threats from those disrupting that order, and a great deal of attention is paid to the Trump disruption.

And here is where the report faces its core challenges.

The report focuses largely on arms control treaties including the Iran agreement as important barriers to having to really think again about nuclear weapons.

With regard to Europe, the nuclear challenge has returned and a good deal of thinking about the unthinkable will be necessary to shape an effective way ahead.

The United States will strengthen its nuclear forces, certainly without shaping a limitless build up and will debate and shape approaches the US might take to nuclear deterrence.

This is an important subject but even more so what role Europe will play in that reset.

It is not about preserving nuclear arms agreements; it is re-establishing nuclear deterrence against a Russia which has clearly both modernized its arsenal are threatened key allies with a nuclear threat if they don’t comply with the Kremlin’s wishes.

The second key issue is the return of direct defense against a power which recovered Crimea and seeks to pressure individual states thereby shredding any notion of collective defense.

But this requires a significant rebuild of European defense capabilities and finding ways to field forces in the next five years, not twenty years from now, to provide an effective and credible defense.

What are the short to mid-term forces which can be fielded and what kind of effective crisis management capability can be put into play?

My visits to the UK and to the Nordics have underscored that this is where there is serious thinking about the challenge.

And the new states take the Russian threats very seriously and no amount of debate over the failure of these states to abide by “European values” is going to help.

The third key issue is the inability to secure the borders of the European Union.

The agreement to allow the free flow of members of the European Union has been established but without an ability actually to secure those borders.

And without doubt, the revolt against a number of sitting governments has been generated by this failure.

If I take my list and then turn to the Munich Security Conference report what do I find?

A listing of the threats to the liberal democratic order and an aspirational pleas that the European Union persist in greater integration to sort all of this out.

In this context, both analysts and policymakers have called on the major liberal democratic allies of the United States to compensate for the lack of stable US leadership.

Countries usually mentioned are the other members of the G7 – Canada, France, Germany, Italy, Japan, and the United Kingdom – as well as Australia, South Korea, and the European Union as a whole.

These actors have benefitted enormously from what is known as the liberal international order, underwritten by US power. Some of them are so perfectly adapted to this order – not only in security, political, and economic terms, but also intellectually – that it is hard for them to reckon and come to terms with a changing world….

Heiko Maas has repeatedly talked about an “alliance of multilateralists,” which he defines as “a network of partners who stand up together for the preservation and further development of the rules-based order, who defend multilateralism and who are willing to use political capital to this end because they understand what multilateralism truly means. (Page 13).

This is a nice aspiration but given the challenge of the new authoritarians, China, Russia, Turkey and radical Islam, I am not sure what this really means in concrete terms.

And with Europe facing significant economic challenges which almost certainly put them in a significant period of low economic growth, it becomes even more difficult to understand what the practical steps to enhancing security and defense add up to.

The United States is doing its part through various means; and the nuclear reconfiguration as well as the enhanced collaboration on new air combat systems and missile defense systems is a core backbone for defense, but the challenge to this “other members of the G7” will be to shape real defense capabilities and effective security policies or the Europe I also live in frequently will become more of zone of conflict than it is even now.

In a perceptive look at the Bush Administration and German unification, Frank  Costigliola noted:

The Bush Administra tion’s self-congratulation on unification rested on rosy assumptions about the future: that future German governments would remain in NATO and want American troops, that the US would have the will and the resources to lead NATO, that Washington could use NATO as a tool for managing a variety of European issues, that Germany’s security interests would continue to mesh with those of its neighbours and of the United States, that transatlantic trade tensions would not attenuate security ties and, perhaps most problematic, that Moscow’s humiliating loss of East Germany and other parts of its empire would not spark a revanchist Russian nationalism.