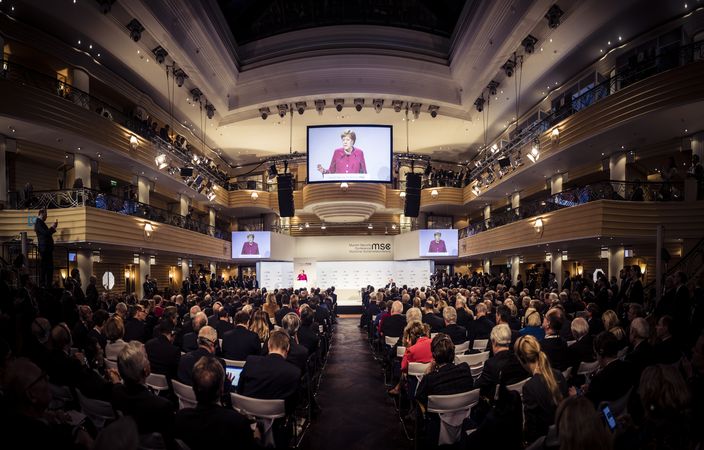 This year’s Munich security confrence provided a look at the strategic positioning of key Western players within the new strategic context.

It has been interesting to watch for a new configuration of Western security agendas and players is clearly evolving, and neither great power competition nor multilateralism really describe the dynamics very well, although speakers tended to fall back on these two positions, presented as polar opposites

With the seizure of Crimea by the Russians in 2014, NATO recognized a new historical challenge: how to deal with the return of Russia as a direct threat to Europe?

But this is not the return of the Cold War, as the Warsaw Pact has dissolved and both the European Union and NATO have extended themselves to the Russian border. They have done so without adding new defense forces or capabilities, and indeed Europe has experienced a significant decline in defense expenditures.

At the same time new challenges have been added.

The Russians have used a new form of warfare, hybrid warfare, to achieve their objectives in Ukraine and have launched major cyber threats as well.  NATO Europe has dismantled much of its direct defense infrastructure and now with the rise of the cyber challenge has a more comprehensive threat system to deal with.

The challenge of building a 21stcentury defense infrastructure and rebuilding NATO forces is significant and at the same time, Europe is now confronting the impact not only of the Russians but other authoritarian states and movements.

China is clearly expanding its influence in Europe and focused on European infrastructure and is doing so in a de facto alliance with Russia.

The radical Muslim threat represented by ISIS plus the increasingly authoritarian regime in Turkey both pose internal threats and challenges at the same time as Europe is dealing with direct defense threats as well.

For many Europeans, invoking the Trump word is a good way to express why the old order is gone and the need for European unity enhanced.

Or simply, something like having the Chancellor of Germany conjure up an image of herself as an exorcist to rid the room of Trumpisms.

But unfortunately, simply evoking “the Donald” is not enough.

Brexit is simply scratching the surface of European disaggregation.

In this piece by Judy Dempsey from Carnegie Europe, she looks at what she calls the “European blame game,” as a piece she wrote prior to the holding of the conference.

What would the Europeans do without President Donald Trump?

Ever since taking office over two years ago, Trump has become the punching bag for many European leaders, particularly from “Old Europe.”

Just look at the recent Pew Research Center poll published in the latest Munich Security Conference Report. Ten percent of Germans are confident that Trump “will do the right thing regarding world affairs.” A whopping 35 percent place their bets on President Vladimir Putin and 30 percent on Chinese President Xi Jinping.

On his home turf, Trump is vilified by the liberal elites and by the Democrats, though his policy vis-à-vis China has won him bipartisan support. Across the Atlantic, the Europeans blame Trump for dismantling, bit by bit, the post-1945 multilateral order. They are pinning their hopes on the Democrats’ ability to deprive Trump of a second term, as if former president Barack Obama was a great foreign policy strategist.

This is because Europe, embodied in the EU, lacks the strategic tools, the mindset, and the leadership to reshape relations with the United States in particular and the West in general.

It is these issues that are the subset of this year’s Munich Security Conference. It will be attended, as ever, by leaders, defense ministers, and security experts from around the world—some of whom have a shocking record of human rights violations, particularly Egyptian President Abdel Fattah el-Sisi.

The participants will be given the MSC’s latest report: “The Great Puzzle: Who will Pick Up the Pieces?” Wishful thinking aside, it’s not going to be the Europeans.

After over seven decades of unflinching American support for Europe, the EU as a bloc is still not in any position to do foreign, security, or defense policy. Of all the regions or issues raised in the MSC report—from the Sahel and the Middle East to the Western Balkans and more crucially arms control—it’s hard to find the EU making a difference.

Moreover, the EU is not even in a position to deal with the onslaught of digitization. The latter is already the challenge that the West is facing. Digitization knows no borders, with North Korea possibly the only exception. Its impact on supply chains, on information flows, on diplomacy, on daily existence are immeasurable.

Closer to home, leaving aside the huge disruptive effects of digitization, diplomatically and politically the EU cannot even fix the Western Balkans.

It was American diplomats, not EU officials, who understood what was taking place in Macedonia just three years ago when civic activists, individuals, and nongovernmental organizations had enough of the corruption and the slide toward authoritarian rule under former prime minister Nikola Gruevski. That fact that he is now in Hungary evading arrest and protected by Prime Minister Viktor Orbán speaks volumes about the EU’s inability to pressure Orbán.

The EU’s record in stamping out corruption in Kosovo or trying to introduce a semblance of an independent judiciary there has been extremely poor. Brussels has also refused to interfere decisively in dysfunctional Bosnia and Herzegovina, or tackle address the widespread corruption and weak rule of law in EU-candidate member Montenegro.

In short, there’s a glaring gap between the EU’s values and what it practices. Values and principles and soft power are supposed to be the core of its policies. But they lack teeth if not backed up by strict conditionality and hard power.

This unwillingness to strengthen conditionality is already having a negative impact inside the EU. Several member states, including Poland and Hungary, Romania and Bulgaria, have realized that once inside the bloc they can reap all the advantages, including access to generous structural funds.

At the same time, they can flout the EU’s values that are anchored on the rule of law, an independent judiciary, and an independent, free press. Such disregard for the rules has a disaggregating effect on the EU as a coherent organization. The longer populist leaders or corrupt governments prevail and abuse the rules, the weaker the EU becomes.

Indeed, the EU is already disaggregating as the member states increasingly call the shots. The bloc’s defense and security policies, for example, the Permanent Structured Cooperation (PESCO) and the European Defence Agency (EDA) are about aiming at the lowest common denominator. No wonder German Chancellor Angela Merkel signed up to PESCO. It avoids Berlin from taking decisions about hard power and strategic responsibility. No wonder President Emmanuel Macron created the European Intervention Initiative(EI2), a defense coalition operating outside the constraints of the EU. He didn’t believe PESCO was up to the job of creating a credible security and defense policy.

China is another example that shows diverging interests by the member states. Several have tightened their investment laws. They now recognize how China, after flouting intellectual property rights with regard to Western companies investing in China, has put its sights on acquiring important strategic assets in Europe.

To fend off Chinese influence, Merkel and Macron lobbied the EU to allow a merger between the German and French train manufacturers Siemens and Alstom. It was blocked by Margrethe Vestager, theEU’s competition commissioner.

Her decision, while understandable, begs the question about the agility and flexibility of the EU to adapt to the changing geostrategic centers of power, whether it concerns China, the United States, or Russia’s goal of weakening, if not severing, the Euro-Atlantic bond.

And that is the crux of Europe.

European leaders are doing themselves no favors in bashing Trump while ignoring what is happening to Europe’s post-1945 architecture. It is slowly crumbling. No amount of scaffolding will hold it up until and unless European leaders recognize what the end of the post-1945 era means for their security, defense, and stability.

The new geosecurity challenge facing Europe is not just about the ebbing of the transatlantic relationship. The former can probably be fixed. Rather, it’s the toxic combination of China and Russia’s ambitions to divide and break the West.