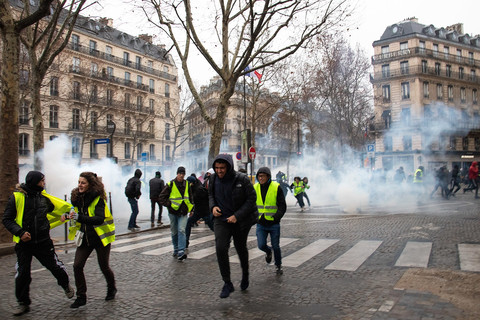 EU leaders should reopen the treaties after the European Parliament (EP) elections in May to tackle migration and security challenges, French president Emmanuel Macron has declared.

The European “Renaissance” should also defend EU values against “nationalist retrenchment” he added, in a direct appeal to all “citizens of Europe” on Monday (4 March).

“By the end of the year, let’s set up … a Conference for Europe in order to propose all the changes our political project needs, with an open mind, even to amending the treaties”, Macron said.

In the new-model EU, migration ought to be controlled by a European Council for Internal Security, the French leader suggested.

This would enforce “stringent border controls” and “solidarity” on distribution of asylum seekers, he said.

These comments are taken from an article by Andrew Rettman and published in the EU Observer on March 5, 2019.

The ELYSEE released the Macron European Renaissance document in virtually all European languages.

If I am taking the liberty of addressing you directly, it is not only in the name of the history and values that unite us. It is because time is of the essence. In a few weeks’ time, the European elections will be decisive for the future of our continent.

Brexit stands as the symbol of that.

It symbolises the crisis of Europe, which has failed to respond to its peoples’ needs for protection from the major shocks of the modern world.

It also symbolises the European trap.

The trap is not being part of the European Union.

The trap is in the lie and the irresponsibility that can destroy it.

Who told the British people the truth about their post-Brexit future?

Who spoke to them about losing access to the European market?

Who mentioned the risks to peace in Ireland of restoring the former border?

Nationalist retrenchment offers nothing; it is rejection without an alternative. And this trap threatens the whole of Europe: the anger mongers, backed by fake news, promise anything and everything….

Meanwhile, back in his own nation, the yellow jackets are continuing to sting and the President of the Republic stands currently at a 28% popularity rating.

Christopher Guilly has discussed the context within which the Yellow Jackets have risen and the threat and challenge they pose in a recent book entitled Twilight of the Elites: Prosperity, the Periphery, and the Future of France.

In his review of the book, James McAuley highlighted the gap which faces President Macron and makes his broader European appeal more notional than effective.

An intense and deeply personal hatred of Macron is the only unifying cry among the gilets jaunes. Eighteen months before the uprising began, this was the man who captured the world’s imagination and who, after populist victories in Britain and the United States, had promised a French “Third Way.”

Yet the Macronian romance is already over, both at home and abroad.

To some extent, the French always turn against their presidents, but the anger Macron elicits is unique. This is less because of any particular policy than because of his demeanor and, most of all, his language.

“Mr. Macron always refused to respond to us,” Muriel Gautherin, fifty-three, a podiatrist who lives in the Paris suburbs, told me at a December march on the Champs-Élysées. “It’s he who insults us, and he who should respond.” When I asked her what she found most distasteful about the French president, her answer was simple: “His words.”

McAuley highlighted a moment, which in his view highlights the validity of Gautherin’s comment.

Nothing quite compares to the statement Macron made in inaugurating Station F, a startup incubator in the thirteenth arrondissement of Paris, housed in a converted rail depot. It is a cavernous consulate for Silicon Valley, a soaring glass campus open to all those with “big ideas” who can also pay €195 a month for a desk and can fill out an application influent English.

(“We won’t consider any other language,” the organization’s website says.) Google, Amazon, and Microsoft all have offices in it, and in a city of terrible coffee, the espresso is predictably fabulous.

In June 2017 Macron delivered a speech there. “A train station,” he said, referring to the structure’s origins, “it’s a place where we encounter those who are succeeding and those who are nothing.”

This was the moment when a large percentage of the French public learned that in the eyes of their president, they had no value. “Ceux qui ne sont rien” is a phrase that has lingered and festered. To don the yellow vest is thus to declare not only that one has value but also that one exists 1