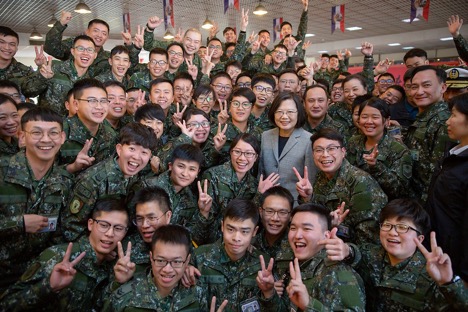 In Taiwan’s presidential and legislative elections on 11 January 2020, Tsai Ing-wen secured a second term as president and her party, the Democratic Progressive Party (DPP), maintained its legislative majority.

The elections attracted unprecedented international attention in the context of US–China strategic competition and the hardline stance of the Chinese Communist Party in the Xi Jinping era.

Beijing continues to insist on the inevitability of ‘reunification’ and has intensified pressure on Taiwan. Meanwhile, Washington has increased the tempo of its engagement with Taipei, including arms sales, general diplomatic support and high-level interactions under the Taiwan Travel Act.

The significance of the election result reaches beyond domestic party politics: the poll also reflects voters’ assessments of the successes and failures of Beijing’s Taiwan policies, US–China relations and regional security.

In the week before the elections, there was a surprising level of uncertainty about the outcome. At the end of 2018, Tsai had poor opinion poll numbers and her government had been challenged by rivals within her own party, by a stalled domestic policy agenda and by diplomatic reversals as Beijing poached Taiwan’s remaining diplomatic allies.

Public opinion had turned strongly in her favour by the middle of 2019, but the DPP remained cautious up until election night. In the end, not only did Tsai secure a second term, but she received 8.17 million votes (57.13% of ballots cast), the largest number ever for a candidate since direct presidential elections began in 1996.

The political sentiment around Tsai’s win has been as much about expectations as her total vote count. Large winning margins are not unprecedented in Taiwan’s elections, but they’re usually associated with a change in the governing party.

For example, in 2008, the leader of the pro-Beijing Kuomintang party (KMT), Ma Ying-jeou, was elected by a similar margin after eight years of a DPP government under Chen Shui-bian that was dogged by corruption allegations. However, Ma’s win in 2012 was by a much closer margin amid disillusionment about his government’s China policies.

Similarly, in the legislature in this election, although the KMT made gains, they were smaller than expected for a second-term correction, and a minor party that is a key KMT ally, the People’s First Party, was wiped out.

The DPP can stake its claim to being the ‘natural’ party of government with strong support in the north, while the KMT retrenches to divisive politics that mobilise its core supporters but don’t carry the broader electorate.

The KMT’s presidential candidate, Han Kuo-yu—who in the 2018 mid-term elections took the mayorship of traditionally very pro-DPP southern city of Kaohsiung—initially offered a disruptive and populist alternative to the staid Tsai.

His political style seemed suited to the era of social media in which disinformation and rumour, generated both domestically and by the Chinese state, circulated in Taiwan’s febrile political atmosphere.

The turning point for Tsai’s campaign was Xi’s 2019 New Year speech on Taiwan marking the 40th anniversary of the National People’s Congress’s letter to ‘Taiwan Compatriots’. Xi asserted unification under the ‘one country, two systems’ model as the necessary and non-negotiable outcome for Taiwan.

Tsai’s quick and decisive rebuke boosted her popularity domestically, with tacit support from the US administration.

Like previous Taiwanese presidents, Tsai Ing-wen rejected ‘one country, two systems’, but she used her statements after Xi’s speech to regain the political initiative. The KMT’s Han also stated his opposition to the policy, but was caught between criticising the DDP for not managing the relationship with China and promising openness towards China to support business interests.

Meanwhile, Han’s campaign machine was dysfunctional and the KMT was beset by an identity crisis. In the second half of 2019, the protests in Hong Kong left few in Taiwan under the illusion that Beijing would honour any arrangements that would respect any form of autonomy.

The younger generation of Taiwanese in particular saw an urgency to defend Taiwan’s sovereignty, maintain their democracy and refuse a future like Hong Kong’s.

On election night, Tsai herself emerged politically stronger as a democratically elected president in a way never before seen in Taiwan. She faced down rivals in her own party, defeated the KMT and also challenged an emerging populism in Taiwan’s politics.

Having secured an election victory, the Tsai government faces continuing challenges internationally and in cross-strait relations.

Tsai was extremely disciplined in her cross-strait actions and rhetoric in her first term, despite the pressure within her own party and from Beijing, limiting the possibility of escalation or crisis.

She has conveyed directly her intention to maintain that approach in her second term. In her acceptance speech, she vowed to continue with a policy based on peace, parity, democracy and dialogue, explaining that:

‘Peace’ means that China must abandon threats of force against Taiwan.

‘Parity’ means that neither side of the Taiwan Strait should deny the fact of the other’s existence.

‘Democracy’ means that the future of Taiwan must be decided by our country’s 23 million people.

‘Dialogue’ means that we must be able to sit down and discuss the future development of cross-strait relations.

None of those is an easy goal. On one side is Beijing’s intransigence and growing capacity for action and Xi’s strongman tactics. On the other is a disciplined and experienced Tsai administration whose leader has been greatly elevated in political stature both at home and abroad.

Having seen off a populist contender for the presidency and a number of presumptive men in the senior ranks of her own party, she will likely be inclined to use her political capital to its fullest to secure Taiwan’s interests over the next four years.

Huong Le Thu is a senior analyst at ASPI and Mark Harrison is a senior lecturer at the University of Tasmania.

Featured photo is credited to the Taiwan Presidential Office.