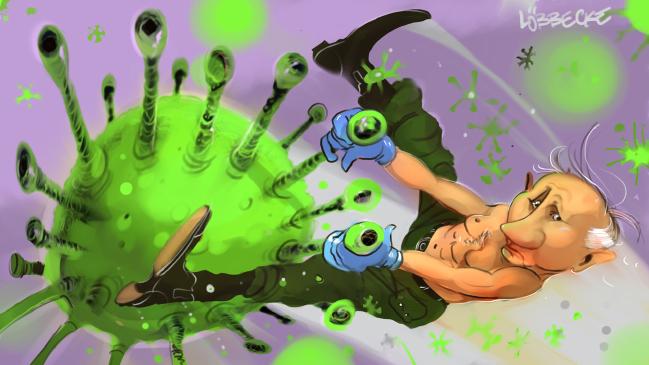 Russia is experiencing a triple crisis that threatens to undermine the authoritarian leadership of President Putin.

The coronavirus is starting to hit Russia very hard indeed.

And the Russian economy has stagnated for the last six years.

Any one of these crises would be a serious matter.

Taken together, the question is whether Putin can survive?

As recently as mid-April, Putin told Russians that the coronavirus crisis was under control. By May, however, he warned that the country is facing “perhaps the most intense stage in the fight against the epidemic.”

The country is now registering the second highest spread of infection in the world with more than 10,000 new infections daily, bringing the official tally to over 170,000 with 1500 deaths.  This reported death rate must be seriously questioned.

Russia’s health service is a shambles with Soviet-era hospitals suffering from a shortage of doctors, leading to long waiting times. Its badly underfunded national health system is at risk of being overwhelmed. Putin now acknowledges that the situation inside the country “remains very difficult.”

The prominent Russian scholar, Lilia Shevtsova, observes that the coronavirus crisis was not the kind of challenge the Russian government was expecting.

While Russia was preparing for threats, real or imagined, from geopolitical rivals and internal opponents, the pandemic has struck and it has now paralysed the system of personalised power. A state accustomed to surviving by means of mobilisation and militarism has suddenly demonstrated that it cannot function in an emergency. Shevtsova considers that the Russian state’s failure of personalised power to govern in a crisis may be a disastrous sign of things to come.

While other states have offered their populations emergency aid packages amounting to as much is 10 to 12% of GDP, the Kremlin has been prepared to spend only 2.8% of GDP with most of it going to state-owned industries, including companies that have close ties to the Kremlin.

Small and medium-sized private sector businesses accounting for about a third of the workforce, or 40 million people, have been promised only 3% of the state’s total financial assistance package. Even if this virus is contained before the end of the year, Russia will not avoid serious economic damage. Experts predict that Russia’s GDP will decline by 10% in 2020 and unemployment of 11%.  Already, 30% of small and medium-sized businesses are on the verge of bankruptcy. Russia’s response to this pandemic has been late and inconsistent, and it is now clear that the disease is rapidly spreading across the country.

Added to this is the collapse of world oil prices, which will totally undermine Russia’s state budget that is 30% dependent on oil revenues. The stark fact is that the federal budget only breaks even at a price of $US42 a barrel. In response to the global pandemic, world oil prices have plunged from $US64 a barrel last year to not much more than $US20 a barrel at present. The combination of the massive attack of the coronavirus on Russia’s economy together with the collapse of world oil prices is creating an unprecedented financial shock in post-Soviet Russia.

All this comes on top of a broader economic crisis over the last six years.

Russia’s economy has been facing tumbling growth rates and declining living standards ever since Western sanctions were imposed  in 2014 in response to the invasion of Crimea and the occupation of eastern Ukraine. At the end of April, 54% of respondents to a poll complained about falling incomes, and 24% said they had no income at all.

The question now arises whether such a severe economic and health crisis will provoke growing social unrest. Approval ratings for Putin’s response to the crisis already are below 47%, according to an independent survey last month, while a state-funded polling agency found just 28% of respondents picked Putin when asked to name a politician they trust.

The first half 2020 was supposed to have been the decisive breakthrough to enshrine Putin’s presidential power via a revised constitution. But the coronavirus pandemic has derailed those plans and compromised his authority. Some reports suggest that the public mood is shifting from shock to anger. None of this is to argue that Putin is about to be overthrown.

But for a man who paints himself as having personally led the Russian people out of “a time of troubles” (smutnoe vremya) into an era in which Russian greatness is being restored, the future now looks grim.

Putin’s essentially Soviet paranoid worldview is obsessed by what he fears are Western plots to see him overthrown, which is what he believes happened to the elected President of Ukraine, Victor Yanukovych, in 2013. Shevtsova predicts that widespread fear of the virus, the state’s failure to cope with it and the rage of ordinary people could become a powerful explosive. But she warns that if Putin is replaced the nature of any future power centre in Moscow most probably will again be authoritarian.

All this leads me to the question of whether Putin might strike out militarily at a time when the US and European NATO countries are totally preoccupied with the corona virus pandemic.

An obvious target would be Ukraine, given that Putin proclaims Russians and Ukrainians are one people.

The Kremlin has a pathological fixation with Ukraine, which is shared by the mass of Russians including much of the educated elite.

For Putin, Ukrainian independence over the last quarter of a century has been a grievous geopolitical mistake.

Paul Dibb is professor of strategic studies at the Australian National University.

This article was first published by The Australian on May 5, 2020 and is reprinted with permission of the author.

And the featured image comes from The Australian article and is credited to Eric Lobbecke.