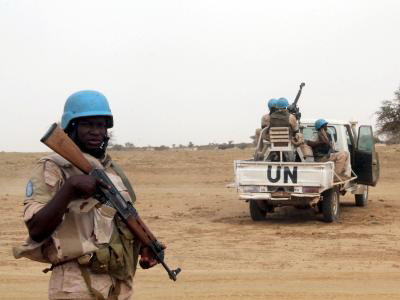 African Union (AU) and United Nations (UN) peacekeeping missions in Africa have been slimmed down, rotations have been frozen and most staff are working remotely due to the impact of the COVID-19 pandemic and peace operations on the continent may be forced to drastically contract in size and scope even as conflict and unrest may increase due to the coronavirus.

These were some of the key findings of a webinar held last month by the Egmont Institute with senior researcher Dr Cedric de Coning from the peace conflict and development research group at the Norwegian Institute of International Affairs (NUPI). He is also a senior advisor for ACCORD (The African Centre for the Constructive Resolution of Disputes).

Drawing on extensive research on African peacekeeping, de Coning examined how the COVID-19 pandemic has disrupted peace operations on the continent. Although peacekeeping missions have not reported new or rising conflict due to COVID-19, financial challenges are likely to occur with the global economic recession that is expected to follow in the wake of the virus.

As the total number of COVID-19 cases in Africa nears 350 000, de Coning’s research points out that currently, there is a limited correlation between COVID-19 and overall levels of conflict. “Africa is still very much in the beginning of the effect that COVID-19 is having on the continent… I think the situation is going to get increasingly worse in Africa and therefore the impact on peace and security is likely to get worse,” said de Coning.

This is the backdrop against the significant disruption in overall African Union and United Nations peace operations in Africa. These operations had to identify which activities are absolutely essential while limiting the risk of spreading COVID-19 to the population and peacekeepers. Support to civilians and local authorities had to be maintained while missions were limited to essentials, rotations frozen and patrols reduced.

In the case of contracting COVID-19, de Coning mentioned an entire unit from the United Nations Multidimensional Integrated Stabilization Mission in Mali (MINUSMA) that was quarantined due to one member of the unit testing positive for the virus.

The United Nations Mission in South Sudan (UNMISS) had COVID-19 cases and the government responded by setting up roadblocks or checkpoints outside UN bases and reduced or stopped the movement of UN staff. De Coning went on to say that UNMISS protection of civilians (POC) sites had to provide basic services to civilians living there. Pre-COVID-19, people would leave POC sites to do their shopping and other daily tasks and return in the afternoon. Now, with limited movement allowed, there is a responsibility on the UN to provide basic services in those POC sites.

The African Union Mission in Somalia (AMISOM) has “team sites” that share water resources with civilians and these are in quite close proximity with civilians. De Coning explained that, “This was desired pre-COVID-19 in order to ensure good information sharing and civil-military relations, which is [now] a problem when you want to reduce the possibility of the virus spreading either from troops or from the population.”

De Coning sited critical engagement with the community and its leaders as key to conflict resolution and this is now happening on a, “very limited scale”. Most staff are now working from home or from their accommodations as information sharing has moved digitally.

In terms of rotation and movement of soldiers, de Coning stated that many units were overdue for rotation and could no longer do so until the end of June when some limited rotations started. Transit camps have been set up for new arrivals and units that return home are required to quarantine for 14 days. Airlift capacity is now limited with additional rules and regulations. The number of units deployed has to be rethought, as some countries may have domestic priorities and want to severely mitigate the risk to their own troops. “Rotations alone has had major logistical implications,” de Coning said.

The impact of COVID-19 on AU and UN headquarters (HQ) has been more significant than the countries they are deployed in. An example is the UN HQ in New York. Operations are now been managed and supported by HQ staff working remotely. De Coning stated that, “Decision making is slower, many of the decisions are being pushing downstream; missions are being rolled over where they can be. So overall quite a significant impact on those elements [HQs] as well”.

Financially, de Coning said that in the short term the UN is currently facing a cash-crunch while Donald Trump’s administration is addressing possible funding cuts to the UN. According to the Council on Foreign Relations (CFR), the US government, while contributing over $10 billion to the United Nations in 2018, cut funding to the UN Agency for Palestine Refugees and the UN Population Fund in 2017. Trump’s administration is seeking to make further cuts in the 2021 budget. Considering the US has been worst affected by the virus and a global recession is predicted in the third and fourth quarter of 2020, the medium term might see less money for both AU and UN missions, causing them to shrink. De Coning pointed out that, “Once you have reduced the budgets or the practical amount available for many of the operations, it in a sense becomes the new normal and then to ramp it up again will be quite difficult unless driven by some major emergencies.”

De Coning warned that although there has not been a direct correlation between conflicts and COVID-19, the virus will exacerbate current tensions and vulnerabilities, with countries with recent history of conflict at the highest risk. He also warned that some governments may use the virus as an excuse to act against opposition and postpone or suspend elections under states of emergency. Insurgents and violent extremists may use COVID-19 as a means to rally against governments. There may also be social unrest from the economic impact of COVID-19.

De Coning concluded that the number of COVID-19 cases in Africa is still in its infancy and is set to rise significantly. There is still an unclear picture on the severity of the economic and political instability, social unrest and violent conflict it will cause or exacerbate. Under a worst-case scenario, UN peace operations could see a 30 to 40% contraction due to the global economic recession. A milder scenario is reduced operations for several months that sees some normality returned. De Coning’s closing remark was, “What we have seen in Africa so far has already in a sense confounded many of the projections that expected much higher unrest and impact of COVID-19 in Africa, which has showed resilience up to now.”

This article was published by defenceWeb on July 7, 2020.