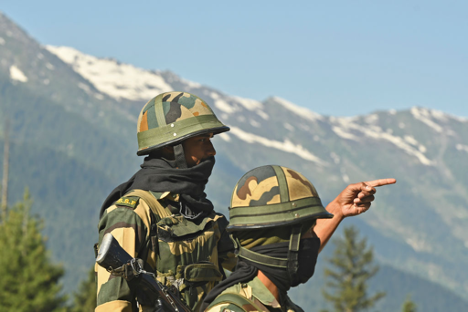 After last month’s clash in the Ladakh region’s Galwan Valley killed 20 Indian soldiers and an unknown number of Chinese troops, the two countries are settling in for a prolonged standoff on their disputed Himalayan frontier, even amid reports of a disengagement at the site of the clash.

More important, the recent skirmish may have highlighted a broader shift in Asian geopolitics.

At first glance, this suggestion may seem exaggerated.

After all, China and India had been making a decent effort of living with each other. Although they haven’t reached a durable settlement of their disputed 3,500-kilometre border, not a shot had been fired across the Line of Actual Control (LAC) in 45 years.

Of course, bilateral tensions also reflect long-term disagreements that go beyond territorial disputes, such as China’s ‘all-weather’ alliance with Pakistan, and India’s hospitality towards the Dalai Lama, to whom it granted refuge when he fled Tibet in 1959. But neither country has been swept up by these issues.

When China declared that the border dispute could be left to ‘future generations’ to resolve, India was happy to go along. India also endorsed the ‘one China’ policy, and shunned United States–led efforts to ‘contain’ its northern neighbour.

But the latter policy, in particular, has played into China’s hands. The People’s Liberation Army has taken advantage of the seemingly benign situation to undertake repeated military incursions.

Each one was minor.

China would take a few square kilometres of territory along the LAC, declare peace, and then fortify its new deployment. As a result, each mini-crisis brought a ‘new normal’ on the LAC. And it was always China’s position that improved.

By the time ‘future generations’ settle the border dispute, China’s leaders seem to hope, the reality on the ground—as well as the broader balance of economic and military strength—will heavily favour China. Any agreement will reflect that.

In the meantime, border incidents keep India off balance and show the world that it’s not capable of challenging China, let alone underwriting regional security.

India has reinforced its military assets on the LAC to stave off deeper incursions, and hopes to press China to restore the status quo ante through diplomatic or military means.

For example, it could capture land elsewhere on the LAC to use as leverage. But that’s easier said than done.

Meanwhile, Indian Prime Minister Narendra Modi has claimed that China is not in control of his country’s territory. This looks suspiciously like a surrender to the new reality in the Galwan Valley and Pangong Lake, where the PLA has established positions that didn’t exist before May. It could embolden China to pursue additional small gains across the LAC.

India has pursued some economic retaliation, banning 59 Chinese apps on data-security grounds. It is likely soon to bar Chinese companies from other lucrative opportunities in its vast market.

But given India’s dependence on Chinese imports—including pharmaceuticals, automotive parts and microchips—excessive restrictions could amount to cutting off its nose to spite its face.

India has only two real strategic options: kowtow to China or align itself with a broader international coalition aiming to curb China’s geopolitical ambitions.

Despite Modi’s apparent capitulation, there’s reason to believe that India may choose the latter approach.

For starters, India has lately increased cooperation with the US military. In 2016, it concluded a logistics support agreement, and in 2018, it reached a communication security agreement and an accord on geospatial cooperation.

India has embraced, at least rhetorically, the US concept of a ‘free and open Indo-Pacific’, and is gradually abandoning its reluctance to participate in the US-led ‘Quad’, an informal four-country grouping (which also includes Australia and Japan) focused on countering China’s regional ambitions.

The foundations have been laid for a more substantive strategic shift.

India has obvious incentives for such a shift.

Beyond its belligerence on the LAC, China has increased its support for Pakistan, spending more than US$60 billion on a highway to the Chinese-run port of Gwadar. A ‘peace strategy’ towards these two adversaries holds no attraction for an Indian government that has stripped Jammu and Kashmir of its autonomy, in an open challenge to Pakistan.

Moreover, India sees China’s hand in its difficulties with other neighbours, especially Sri Lanka and Nepal, whose communist government has begun questioning its own border with India. China has further rankled India by opposing its aspirations to a permanent seat on the United Nations Security Council, blocking it from joining the Nuclear Suppliers Group, and making territorial claims in the northeastern Indian state of Arunachal Pradesh.

India’s ruling Bharatiya Janata Party is not averse to a policy shake-up. In May, two BJP MPs thumbed their noses at China by ‘attending’ the virtual swearing-in ceremony of Taiwanese President Tsai Ing-wen. India has also criticised China’s Belt and Road Initiative, refusing to attend BRI forums in 2017 and 2019. And it has withdrawn from the Asia-wide Regional Comprehensive Economic Partnership over concerns about Chinese dominance.

But there remain significant potential barriers to a strategic realignment.

Such an approach would mark a major departure from India’s traditional obsession with protecting its ‘strategic autonomy’—a legacy of two centuries of colonial rule, reflected in India’s role in establishing the Non-Aligned Movement during the Cold War.

Furthermore, India has no interest in putting all of its strategic eggs in one basket. It remains heavily dependent on Russian military equipment and supplies (though it has recently diversified its purchases), and Donald Trump’s US isn’t exactly a reliable partner. But is this a worse option than capitulating to China?

Eight months ago, Modi hailed ‘a new era of cooperation’ with China.

Though it’s too early to say with certainty, that era may soon be buried in the snowy heights of the Himalayas.