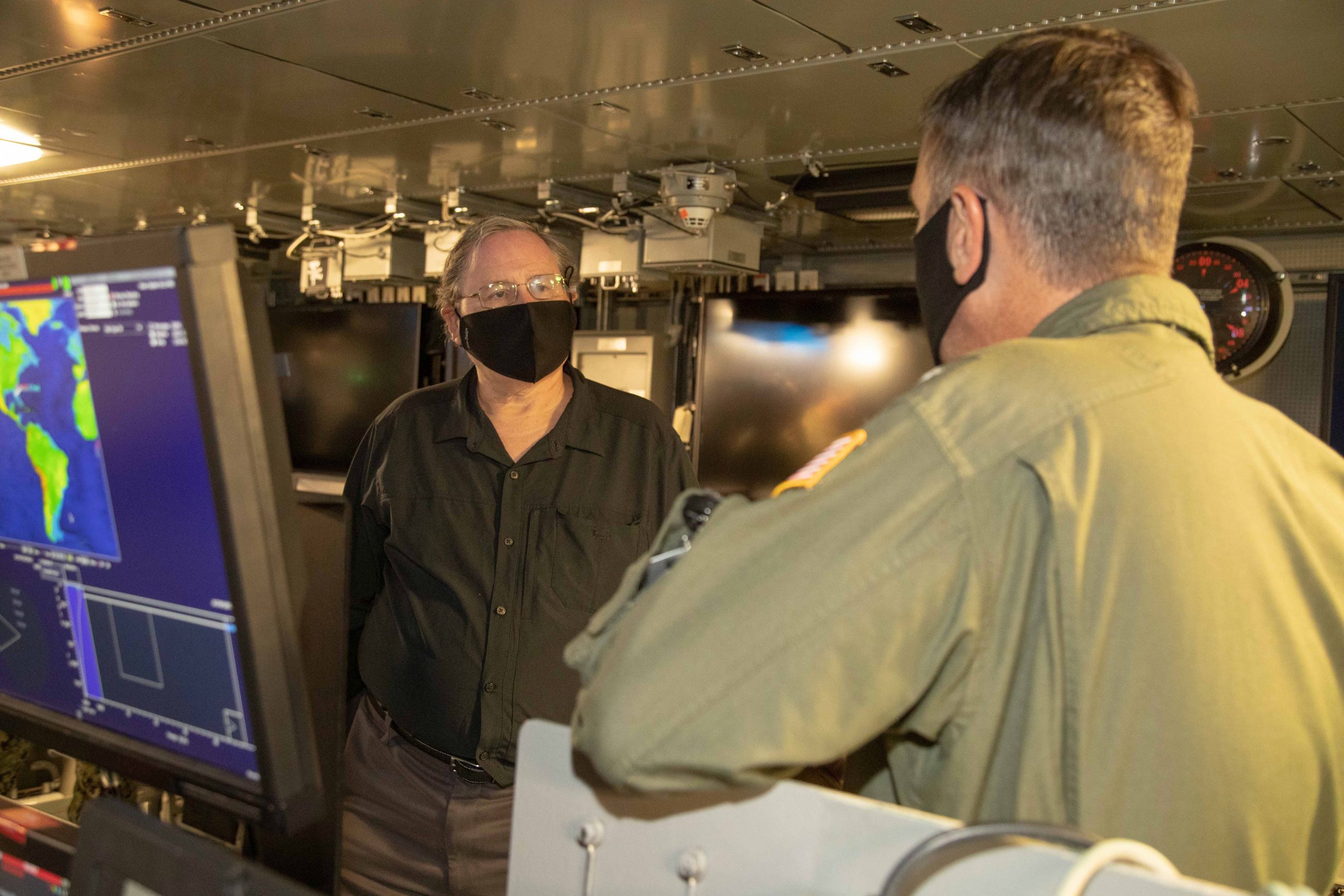 Much like a visit to the USS America reveals the importance of having a three-deck large deck amphibious ships to its con-ops, one has to go below deck of the USS Gerald R. Ford to visit the C2/ISR management deck, as I would call it, to see why the USS Gerald R. Ford is being built to anchor the way ahead for 21st century maneuver warfare at sea.

The command deck can be viewed as an important upgrade over the Nimitz class super carriers; but when considered in terms of the transformation of the fleet into an Integratable distributed force operating through interactive kill webs, the command deck is an enabler of the way ahead, and a beneficiary of the C2/ISR revolution underway.

My visits to NAWDC highlighted the shift of focus from a legacy approach to air wing training for the integrated air wing to a much wider focus on how aviation was interacting with a much wider fleet and joint/coalition force evolution. My discussions with Vice Admiral Miller, the recently retired Navy Air Boss, highlighted the emergence of what one might call the integratable air wing which is a carrier air wing operating in mission packages which can work with the distributed force to deliver an integrated combat effect.

The command deck on the USS Gerald R. Ford is an expression of this change.

Clearly, the USS Gerald R. Ford is coming to the fleet, as the fighting Navy refocuses and blue water operations and blue water expeditionary operations. At the heart of such a return is maneuver warfare at sea. The U.S. Navy has clearly done this before but is now doing so in the context of new technologies, and new joint and coalition capabilities. It is being done so in the build out of the integrated distributed force able to shape combat effects through combat effects across that force.

The command deck and capabilities onboard the ship are significant. I had a chance to tour those decks with Rear Admiral Clapperton and CSG-12’s Information Warfare Commander, Capt. Steve “Shep” Shepard. What one could experience was a much more significant working area for mission planning, and to incorporate a numbered fleet as desirable or joint force command elements as well.

What is clear is that with the power generation systems and the cooling systems onboard Ford, the ship can accommodate the evolution of technology onboard the ship, and above all the evolution of computational power and digital technology.

Ford has only about half of its power capacity being taken up and as such the ship can incorporate new weapons systems whether directed energy whether it is a new C2 system whether it is new wave forms to operate in a denied environment. Ford has taken the lessons learned over decades of experience for the Nimitz class with regard to command at sea — how to share information across the fleet — how to use the IW commander as the integrator of all those other warfare commanders and is harvesting those lessons learned.

Capt. Steven Shepard is a key member of the team standing up Ford for its first deployment. This means, as Rear Admiral Clapperton put it: “As a Strike Group, we are building IW into the ship from the ground up, and Shep and his team are working our mission planning and C2 systems with an eye to enhanced IW capabilities which can be delivered by the ship and interactive with the fleet and the joint force.”

Notably, the two officers served together towards the end of the Cold War, and that memory is also an anchor point to building out the Ford for the peer competitor world.

We walked through together the mission planning spaces onboard the ship. One could see how the spaces are optimized and positioned in a better way to enable those warfare commanders to work together and to allow for additional services partners allies to also incorporate directly on the Ford and then to share that level of understanding and that level of awareness with those partners and across the strike group. Rear Admiral Clapperton noted: “The Ford is well positioned as we move into this future where an aircraft carrier and the strike group can be considered enablers of other weapon systems. We can function as an integrator of all of those capabilities, or as enabler of the fleet and joint assets, but equally benefiting from the joint capabilities operating in the extended battlespace.”

He then described how he viewed the capabilities of the ship to deliver more effective integrated operations.

“When you get into mission command scenario and when you get into a coms denied environment scenario where the commander forward needs to make real time risk decisions, there is no time to go back to a mother may I kind of C2 process. We need platforms like this which enable coordination in such an environment.

“If we want to do naval integration, with the command space we have on Ford, we can, for example, bring onboard the command element for an expeditionary task force or expeditionary strike group. We can liaison with them and put them right there in the command suites next to the guys who do surface and underwater warfare for us. They could be working hand in glove to ensure complete integration of the maritime domain awareness picture. We could have those people sitting side by side working those issues making sure integration is happening.”

The discussion with Capt. Shepard – a third generation military officer  with more than 30 years of experience in the U.S. Navy — highlighted the expanded role for IW as part of the carrier maneuver warfare approach.

And in that approach, we discussed the coming of the new Maritime Intelligence, Surveillance, and Reconnaissance (MISR) officers as well. He argued that the role of carrier maneuver was to provide flexibility to respond to threats. It is to create uncertainties for adversaries, and clearly IW and combat in the electro-magnetic spectrum is a key part of that effort. All of which means that ability of the C2/ISR deck as I like to call it is a key part of the warfighting capability of the ship.

While it is much cooler watching aircraft take off from the deck, many of the decisive effects delivered by a Ford-led task force will be delivered in the spaces below deck. Capt. Shepard sees the creation of the Information Warfare Commander (IWC), a warfare commander equal to the Air Wing and Destroyer Squadron commander, as critical to the Navy in operating and managing the Information Warfare domain in Great Power Competition.  Additionally, the coming of the MISR officers as part of the expansion of the kind of situational awareness which allows for more effective maneuver warfare at sea.

The intersection between what the USS Gerald R. Ford enables in terms of the new capabilities built into the ship, and the new workflows enabled by those capabilities and how it benefits from the C2/ISR revolution underway in the fleet and the joint/coalition force is the focus of our forthcoming book with USNI press.

I will conclude with a comment which was generated by a visit with Vice Admiral Miller this past July in his office in San Diego.

“With Vice Admiral Miller, we discussed how the new Ford class carriers can operate quite differently from the Nimitz class. With three times the onboard power systems, new C2 capabilities, an ability to host directed energy weapons, and to configure C2 cells differently, the USS GERALD R. FORD (CVN 78) conducting blue water operations could operate as a key epicenter for supporting multiple kill webs or reintegrating into a tightly integrated defensive force dependent on the evolving combat situation.

“The rethinking of the operations the L-class ships and of the large deck carrier, as part of a wider set of interactive kill webs, are topics to be discussed in future articles, but the work which is unfolding under the Air Boss and in the naval aviation community (remembering that the Marines are key players in that community) clearly is underwriting new ways to work the fleet.”