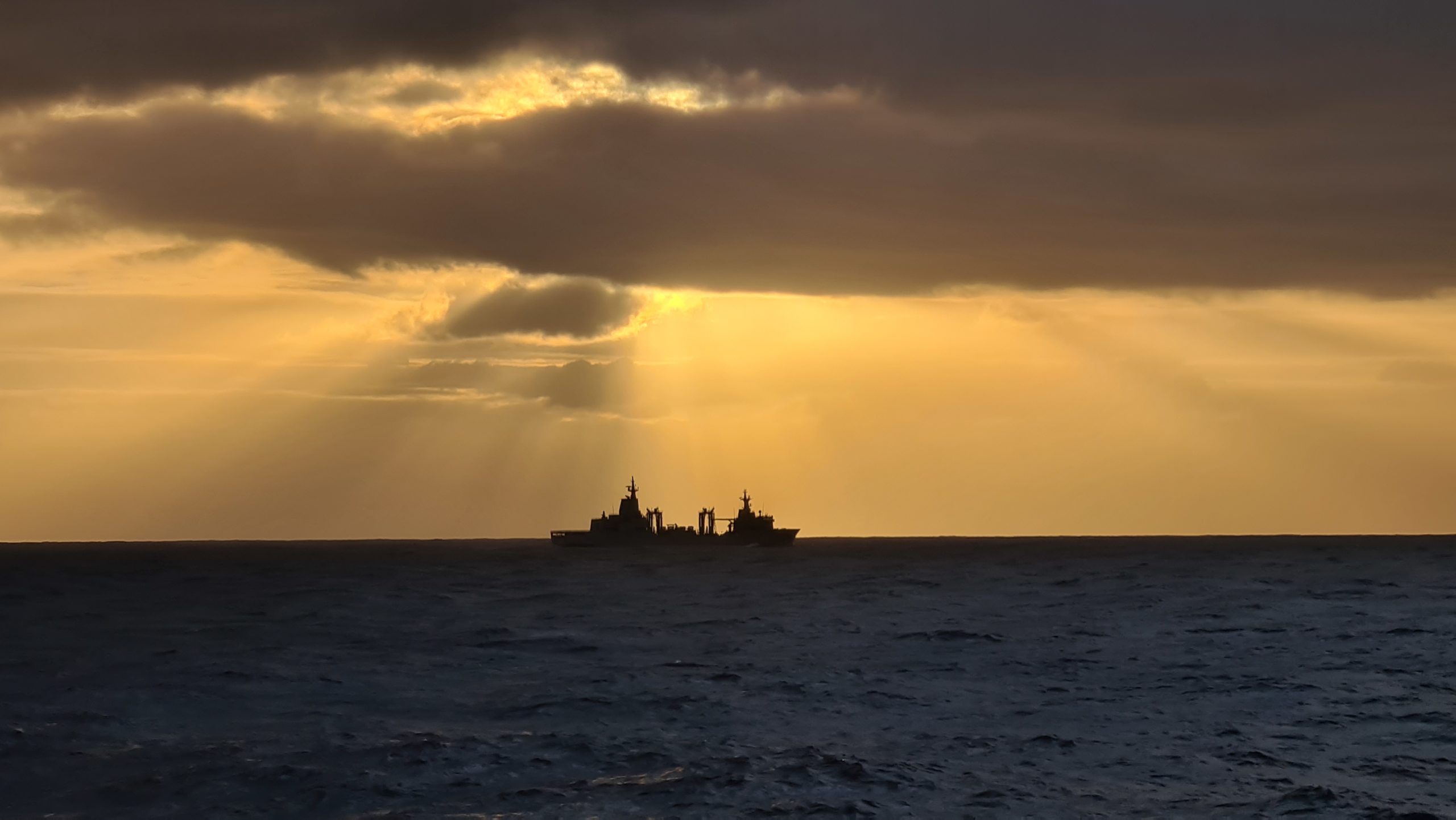 Australia has a long association with ships named Supply, starting with a 24-metre Royal Navy tender which accompanied the First Fleet to Port Jackson in 1788.

Now the Royal Australian Navy’s newest ships are the Supply class Auxiliary Oiler Replenishment (AOR) vessels – HMAS Supply which was commissioned on April 10, and NUSHIP Stalwart which is set be commissioned later this year.

Both were built by Navantia at Ferrol in Spain, and are based on the Spanish Navy AOR ESPS Cantabria which impressed the RAN during a prolonged deployment down under in 2013 during which it filled in for HMAS Success while that ship’s double hull was being installed.

Australia’s history of navy support vessels is as multicultural as the nation’s demographic, with vessels built to diverse designs in different yards, with different onboard systems, different crew training, and different maintenance requirements.

From 1962 to 1985, the RAN operated HMAS Supply (1), a fleet tanker constructed by Harland and Wolf in Belfast, the same yard which produced the less fortunate Titanic. HMAS Supply (1) was replaced by HMAS Success which served from 1986 to 2019. Based on the French Durance class, she was constructed at Sydney’s old Cockatoo Island Dockyard.

The RAN also operated HMAS Westralia from 1989 to 2006 – originally HMS Appleleaf, a Royal Fleet Auxiliary (RFA) which was built in the UK and launched in 1975. With Westralia retiring, Australia turned to the open market, acquiring a Korean-made commercial vessel launched in 2004 and commissioned into the RAN in 2006 as HMAS Sirius, after another member of the First Fleet.

But Sirius was an interim solution, and the need for new vessels was initially spelled out in the 2009 Defence White Paper. The subsequent 2013 White Paper said the then Labor government intended to replace HMAS Success and HMAS Sirius “at the first possible opportunity”.

There was a limited competitive tender between Navantia and Daewoo Shipbuilding of South Korea for construction of the AORs based on an existing Military-Off-the-Shelf (MOTS) design for the Project SEA 1654 Phase 3 Maritime Operational Support Capability – Replenishment Ships requirement.

In April 2016, Navantia’s design was selected, with the Commonwealth signing an acquisition contract worth $640 million for two AOR vessels to be built in Spain, for delivery in 2019 and 2020.

Could Australia have built these large vessels? Sure. We have done it before, but not lately. It would have required a new shipyard plus a new workforce, and it would have clashed with the SEA 5000 frigate, SEA 1180 offshore patrol vessel, and SEA 1000 submarine projects now getting under way. It most likely would have cost more and taken longer.

As to the final cost, the 2016 Defence Integrated Investment Program cites $1-2 billion for the two vessels, with the same again allocated to replace HMAS Choules later this decade. That could be another Supply class AOR, or something different.

On that basis, the two AORs look like good value indeed, as the Australian National Audit Office (ANAO) Defence Major Projects Report for 2019-20 cites a total approved budget of $1.084 billion, very much at the lower end of the projected budget.

With the advent of the Supply class AORs, for the first time the RAN will actually have two identical, modern, and no-previous-owner support vessels, with significant commonality of systems – and thus training and support – with other RAN vessels.

So what was the need? Australia is acquiring a lot of new ships which will need to be sustained at sea. Replenishment ship HMAS Success was in her twilight years and, after 33 years of service, was paid off in June 2019.

HMAS Sirius is much younger and has a vast capacity of 29,000 tonnes of fuel. But that’s all, just fuel. Sirius was converted from a commercial tanker and, as such, has no provision for frozen food, spares, or munitions to replenish warships at sea. The new 19,200 tonne Supply class AORs will do all of that.

NUSHIP Stalwart arrived in Australia from Spain in June and is now undergoing its final fitout at Henderson in WA. Stalwart’s fitout will be followed by commissioning in November, OTE in early 2022 and, ultimately, declaration of Final Operational Capability (FOC) of the class around fourth quarter 2022. The two vessels will give the Navy an enhanced ability to support task groups anywhere they need to be.

Not that long ago, it might have seemed inconceivable that Australia would buy ships of Spanish design, but the RAN now operates three classes of large Navantia vessels. Apart from the two AORs, the RAN operates three Hobart class DDGs wholly built in Australia, and the two Canberra class LHDs, the hulls of which were built in Spain and the island superstructure in Australia.

Back in 2013 the RAN’s DDGs and LHDs weren’t in service, and the visit of ESPS Cantabria and the Spanish frigate ESPS Cristobal Colon upon which the Hobart class is based – besides being a bit of salesmanship – gave RAN personnel exposure to the ship Integrated Platform Management System (IPMS), common across all three of Australia’s Navantia platforms, as well as the 12 Navantia-made LHD Landing Craft (LLC).

The IPMS does everything the combat system doesn’t – it runs the engines and it manages power, water, air conditioning, firefighting, navigation, and communications.

CDRE Stavridis spent some time on ESPS Cristobal Colon using the IPMS. “Even though I could not read a word of Spanish, I was able to start an engine,” he told ADBR. “It was quite intuitive and easy to work. It is a great system.

“I really understand the importance of commonality in training,” he added. “Having a bespoke system through the life of type of a vessel is not only inefficient but very difficult when you need a replacement crewman. If you have someone trained on a common system, they can move around within that class and to other platforms. It makes the training impost that much easier.”

Training is performed at the Navy Systems Training Centre at Randwick Barracks in Sydney, which features a simulation of IPMS and other ship systems.

The AOR project hasn’t been wholly smooth sailing. The Ferrol yard was shut down for three months in 2020 because of COVID, and delays in resuming full production have meant the ships were delivered six months late.

Though most construction was performed in Spain, there is still a final fitout of around $120 million of Australian industry content to ‘Australianise’ the vessels, with work led by Navantia Australia in WA.

Navantia Australia was established in 2012 and, despite missing out on the mega-deal to build new frigates under Project SEA 5000, has become a significant player in Australian defence industry. The company workforce of 170 is located in Sydney, Canberra, Melbourne, and WA. In 2020 Navantia Australia, parent Navantia SA, and the Commonwealth signed a Strategic Agreement recognising Navantia Australia as design authority for Navantia ships and systems in Australian service.

“This recognises the role of Navantia Australia for fully supporting the design integrity, configuration control, upgrades, and modernisation of four classes of ships,” the company said.

Navantia Australia is prime contractor for AOR support for initial five years under a $250 million support contract, forming the AOR Systems Program Office (SPO), the first SPO to achieve ISO accreditation for Asset Management – Management Systems. In June 2021, Navantia, supported by Sage Automation, opened its IPMS through-life support facility at Garden Island in Sydney. This is an onshore IPMS replicating shipboard IPMS for testing and development of the system to optimise maintenance.

The Australian fitout work includes the installation of Australia-specific equipment comprising weapons including a Phalanx close-in weapons system (CIWS) and two Typhoon remote weapons stations (RWS), chaff dispenser, US Nixie and Israeli Lescut torpedo decoys, the Saab 9LV communications and combat system common to that installed aboard the DDGs and LHDs, and the interior fitout of the galley, laundry, hospital, and a gym.

These vessels would be deemed high value by any opponent, but won’t be helpless in a fight, though first line of defence would always be escort vessels. Significantly, the AORs feature a large flight deck and twin hangars. With space for an extra helicopter, the AORs could in theory contribute to anti-submarine operations should the need ever arise.

In the meantime, at sea in the East Coast Training Area off the NSW south coast, HMAS Supply has been undergoing trials and, according to CAPT Ben Hissink, performing very well. “We have pretty much finished the majority of all our sea trials now,” he told ADBR in late July. “The last set of trials is probably the most important, and that is our replenishment at sea trials which occur in mid-August. We will do that in company with HMAS ANZAC.

“It is going exceptionally well,” he added. “The ship is performing really well at sea. It is very reliable. We were in about sea state 6, so about five-metre seas, and handling very nicely.”

HMAS Supply’s crew of 174 sailors formed in Sydney to begin training in January 2020. But with the ship delayed and the pandemic striking in March, Supply’s crew was assigned to Defence’s COVID taskforce.

These were the Defence personnel you would have seen on TV in that early period, escorting airport arrivals onto buses and to their quarantine hotels. This had the unanticipated effect of welding Supply’s crew into a tight team long before setting foot on the ship, with everyone getting to know everyone, a vital step in creating a new ship’s culture.

“It had the benefit of really forming that team for us and we have seen that come together this year when we had the Sea Training Group trainers on board,” CAPT Hissink told us. “It has set us up exceptionally well for the few weeks ahead.”

That team culture will extend to Stalwart. “We are working hard to create an enterprise of one class, two ships, one team,” he said. “We have named our main packing room the Stalwart Room, and Stalwart will name their main packing room the Supply Room. The closer we can be aligned in the way we operate and culturally as well, it improves the capability of Navy.”

HMAS Supply has adopted Eden on the NSW far south coast as its ceremonial homeport, the first RAN ship ever to do so. Eden is home to the Navy’s ammunition wharf and storage – any ship heading for maintenance in Sydney must empty her magazines at Eden then reload afterwards.

“We did a lot of work last year to build that culture of the ship with Eden,” CAPT Hissink said. “We took down 40 of the crew for the bushfire recovery effort, helped out in the community, rebuilt fences around the football oval, and we visited this year as well.”

This story was written by Max Blenkin and published by ADBR on November 1, 2021.