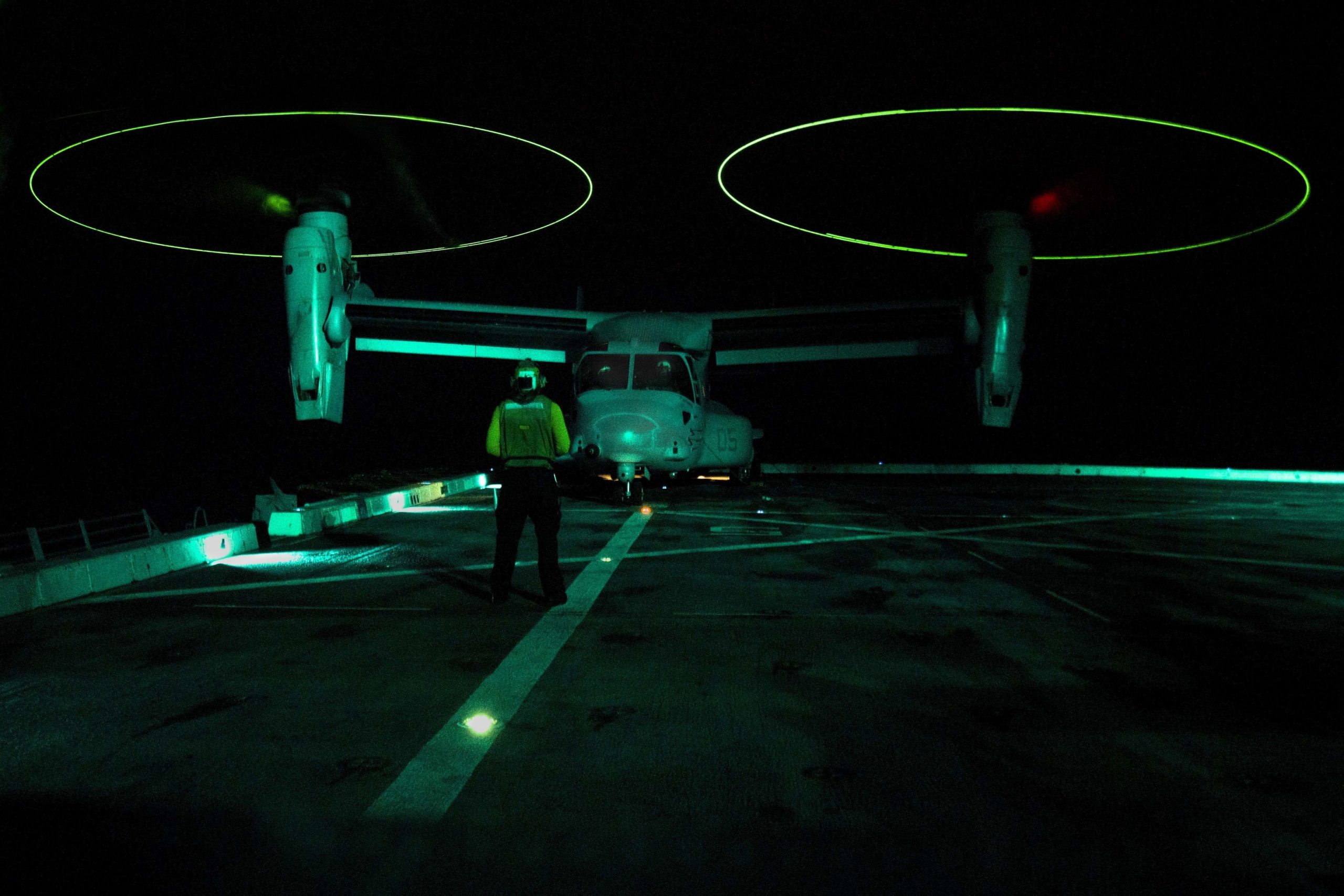 I have written about how the CMV-22B provides for enhanced support to distributed maritime operations in contested environments.

It also can do point-to-point logistical operations can enhance fleet support.

But also enhances the lethality and survivability of Nimitz class carrier and the new generation Ford class carrier.

“Then there was the issue of being able to land on an aircraft carrier at night.

Whitesell said the CMV-22B can do that, while the Navy has been “reticent in the past” to allow Greyhounds to do night carrier landings “based on the  avionics in that platform.”

“It has “the ability to get it on and off the deck In a rather rapid fashion,” Whitesell said.

“I don’t have to clean catapults three and four and land to COD. I can now land it just like a helicopter. I can reposition it. As soon as it offloads, or prior to onload, I can take it back into starboard delta” — Navy term for a holding pattern used by the helicopters and COD aircraft flown on the starboard side of the ship and using right-hand turns at 500 feet.”

What can be missed is the impact of this capability on the lethality and survivability of the carrier itself.

When the carrier is threatened to go Winchester on weapons, you don’t want to depend on delivery of weapons the next day.

Also, it has the speed and range required to get the weapons to the carrier on time.

With 50% more internal fuel than the Marine Corps’ Osprey variant, CMV-22B can transport up to 6,000 pounds of cargo and personnel over a 1,150 nautical mile range.

That is for the Nimitz class carrier.

For the Ford class there is more.

The Ford class has an augmented work flow compared to the Nimitz.

I described the new carrier and its work flow in detail in my coauthored book on the evolution of the con ops of the evolving maritime force.

“There are several elements of the workflow shift for weapons.

“On a Nimitz class carrier, there is a “weapons farm” on the ship’s flight deck from which weapons are worked for assembly and worked with components brought from various levels of the ship and then transported by a hydraulic system which pulls the elevator up with wires and ropes.

“The weapons need to be moved through one of the two mess decks before being transported on deck.

“This process changes onboard the USS Gerald R. Ford.

‘These two large areas allow the ordinance team to prepare weapons of various complexity out of the weather, which makes the process much more rapid and safer.

“And it is clear when one stands in these “weapons handling transfer areas” that the ship will be able to accommodate the various new weapons which during its lifecycle which will be developed, built, and delivered to the U.S. Navy.

“In other words, it is better now for today’s arsenal and has significant capability to support the weapons revolution underway. As Rear Adm. Clapperton, Commander, Carrier Strike Group Twelve, summed up during the October 2020 visit:

“We can move more weapons in a safer way, a faster way to a flight deck that is larger and more flexible.

“And that all contributes to the kind of agility, lethality, and flexibility the Ford brings to the fight.”

Later we commented on another aspect of the carrier redesign which affects the CV22B directly in providing an enhanced role for more rapid weapons delivery.

What this allows is significant additional space for aircraft refueling and weapons loading operations, with the area forward of the island able to accommodate more combat aircraft.

“As the ship’s captain, Capt. J.J. Cummings put it during the October 2020 visit: “If you think of the ship as a gun, and the strike force as bullets, then we have increased the size of the clip because we can load it with more bullets because of the island being further aft on Ford versus Nimitz.”

An apt description for the CMV22-B can be parked in the usable space described and unloaded its munitions directly into the weapons elevator which comes directly to the deck. 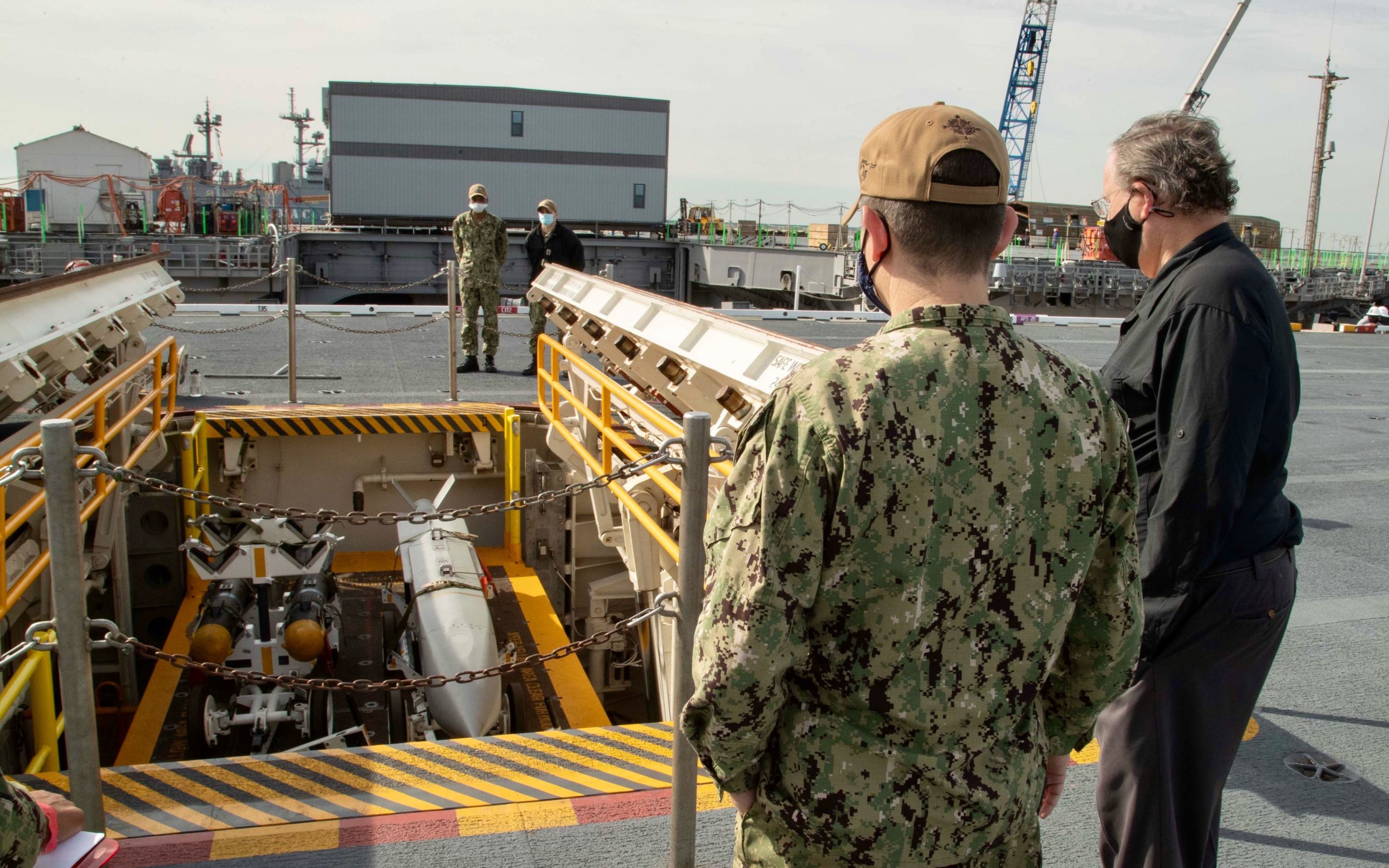 In other words, the CMV-22B’s ability to land at night, and its ability seamlessly to fit into the workflow of the new carrier, enhance the lethality and survivability of the large deck carrier.