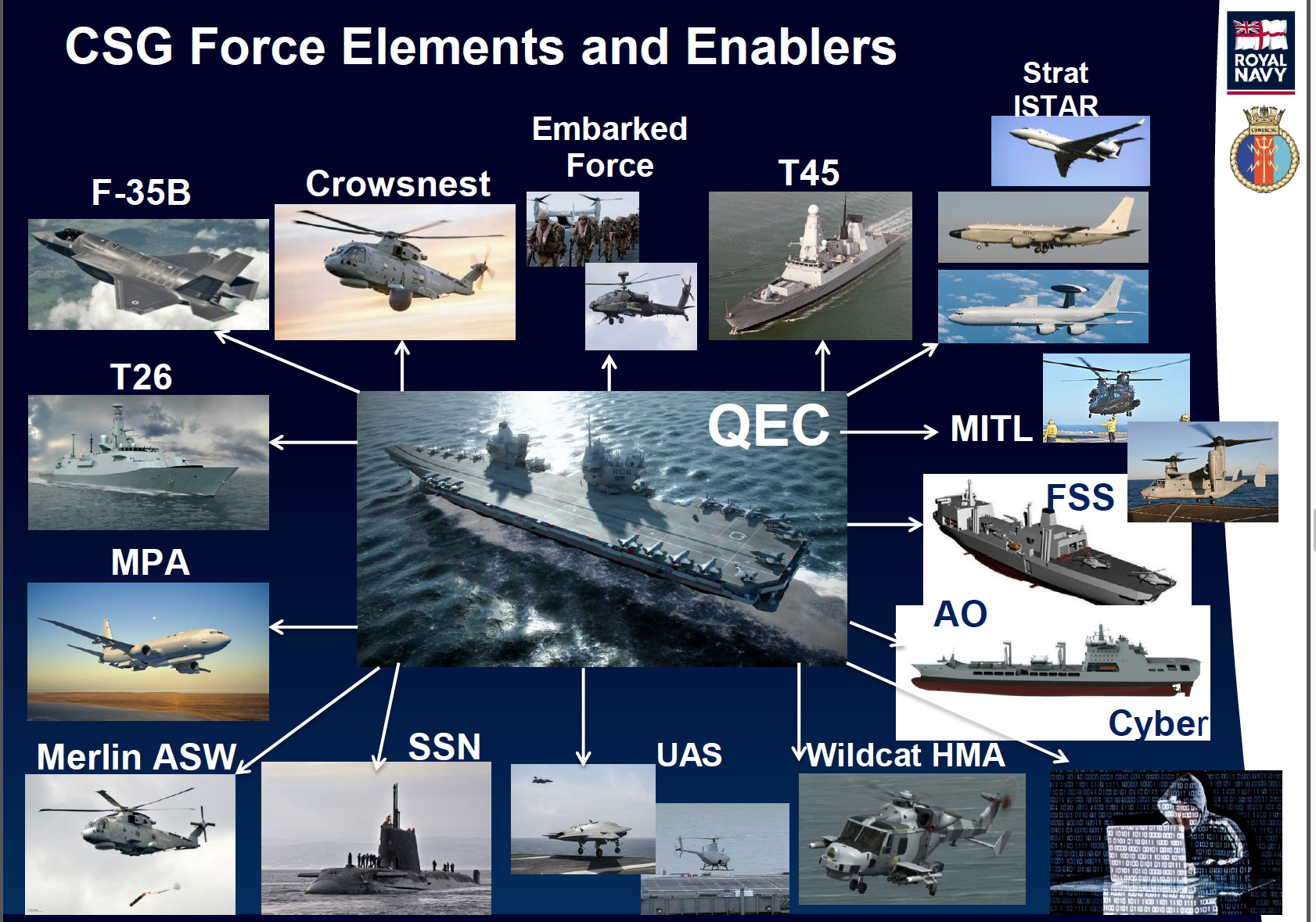 The coming of the HMS Queen Elizabeth to the UK combat force is a trigger for significant defense transformation. Most of the analysis of the new carrier really focuses on the platform and what is necessary to get that platform operational but that is far too narrow an approach.

At the heart of the focus of getting the HMS Carrier strike group to sea is its projected maiden deployment in 2021. This is a significant challenge and the focus of attention of the Royal Navy and its industrial partners and a major element of my discussions while at Portsmouth.

Captain Blackmore is the Senior Responsible Officer for the Queen Elizabeth carrier and functions as Admiral Brand’s right hand man in delivering the carrier. They are not responsible for F-35, which is the function of air command. But with three new aircraft coming onboard the Queen Elizabeth, they are working with the integration of the other aircraft as well and closely with joint helicopter command.

For example, the integration of the aircraft to fly on the carrier is part of the challenge as well, and includes three new aircraft, the F-35, Commando Merlin, and the Crow’s Nest.

The current goal is to have the HMS Queen Elizabeth deployed on its maiden deployment in 2021.

As Captain Blackmore highlighted the way ahead: “We accepted the ship last December and she will go off for the next two years to do fixed wing trials. We will do DT one and two this Autumn, DT three next Autumn, then OT with the goal of getting and IOC for carrier strike in December 2020 and then about four months later, we plan to deploy CSG-21. My focus is clearly on this end point, namely the first deployment to the Arabian Gulf or wherever it is finally decided to do the initial deployment.

“Prince of Wales comes on about two years astern to Queen Elizabeth and she will be seen off of the US Eastern Seaboard in 202 to do the rolling landing trials. We have a new landing aide called a Bedford array which is fitted to Prince of Wales which allows us to exploit the full enveloped of rolling landing and gives the pilot visual cues which enhance his capability to come back to the ship with more fuel and weapons as needed, The Queen Elizabeth will then be fitted with the new system.”

The US is playing a key role in the UK working towards 2021. One aspect is clearly working with the USMC on F-35B and jointly training at MCAS Beaufort.

The third aspect is working with the US Navy on various aspects of preparation and training for carrier operations. In 2012, an agreement was signed between the US and the UK providing a broad agreement on collaboration and joint training which has been evident throughout the workup of the Queen Elizabeth. During my visit, I met with Lt. Commander Neil Twigg, who has just come from the USS George W. Bush we he operated as a Super Hornet pilot. He is the resident fast jet expert on the staff at Navy command.

As Captain Blackmore put it: “We have been involved with the US Navy with regard to to the training of personnel and the concepts, the processes and the organizations that need to come together to make a carrier a carrier. As a US Admiral noted, “This is not a pickup game. This is not something you just step onboard and just do.”

But it is rooted in the design of the ship to operate F-35Bs and helicopter assault forces in varying combinations dependent on the mission. It is also rooted in building out new ships and missiles to operate with the ship, and to be able to operate in the distributed operational battlespace being shaped by the US and other allied forces as well.

A core commitment of the UK government is to have a 100% available carrier strike capability. This means that the maintenance and workup cycles for the two carriers need to be synchronized to ensure that this can be the case. It is a significant challenge in that workforce, training, airpowers systems and maintenance of the carrier need to be synchronized and not just with the carrier but with the other elements of the maritime task force.

Much of Captain Allan Wilson’s presentation and focus during the discussion was precisely on how to meet the challenge of the coming of a maritime task force. The Royal Navy, the Royal Air Force and MoD more generally have being adapting their organizational structure to ensure that the kind of integration, which a maritime task force enabled, by an F-35B will be successfully developed and delivered. This is no easy task.

“That is not how we have done it in the past. The deployment has always been the headmark. We have surged units in and out of the task force. And we have worked the pieces individually.”

The featured graphic was taken from Captain Nick Walker’s presentation at the Williams Foundation seminar in 2016.