After years of increasingly erratic behavior, paranoia and conflict over the Kurds, a sharp break between Turkey, a formerly staunch NATO ally, and the US seems unavoidable barring a sudden shift by elected autocrat Recep Tayyip Erdogan.

The proximate cause of the rift — nay, breakup? — is Turkey’s decision to buy Rusfsia’s sophisticated S-400 surface-to-air missile system, which could pose a grave security threat to the F-35. Senior US military and civilian leaders have warned that Russia could get valuable information about the F-35’s capabilities if Turkey were to operate the S-400s while also flying the Joint Strike Fighter.

One of the crown jewels about the F-35 is its radar cross section. Detailed information gathered about it by the S-400’s radar could pose a grave threat to F-35s operated whoever the S-400 is deployed.

But Turkey and the United States have been increasingly at odds over the last five years. Erdogan repeatedly upbraided (and occasionally threatened) the US for its support of Kurdish forces in Iraq and Syria. Turkey has a Kurdish minority of its own that has long been in conflict with the central government.

“There are no measures which can mitigate our concerns” over the impending S-400 deal, Andrew Winternitz, the Pentagon’s acting assistant secretary for NATO policy, said yesterday afternoon at a US Institute for Peace conference on the European Union.

Acting Defense Secretary Patrick Shanahan wrote Turkish Defense Minister Hulusi Akar a letter yesterday, saying that, “while we seek to maintain our valued relationship, Turkey will not receive the F-35 if Turkey takes delivery of the S-400. You still have the option to change course on the S-400.”

The latest crisis arose because Turks are now being trained by Russia to use the S-400 system, Ellen Lord, head of Pentagon acquisition, and Winternitz told reporters this afternoon. Effective immediately, the US is “winding up” Turkey’s participation in the F-35 program. Some 42 pilots currently being trained at Luke and Eglin Air Force Bases will be required to leave the United States no later than July 31.

The revelation about the training was made quite deliberately on May 21 by Akar. He told reporters about in Ankara, according to the Associated Press.

If Turkey takes any more actions regarding the S-400 before July 31, their personnel may be summarily kicked out, though Lord didn’t quite put it that way. Finally, Lord made clear, Turkey will not get the four F-35s that are awaiting delivery unless Erdogan drops the S-400 purchase. Turkey will also lose the substantial business that comes with supplying the Joint Strike Fighter program with 937 parts, of which 400 are only made in Turkey.

Turkey has been a substantial partner in the F-35 since the program’s beginning and was committed to buy 100 planes.

The US has slowly increased the pressure over the last six months, warning Turkey, threatening to stop delivery of the first four Turkish F-35s, halting delivery of F-35 parts and now we are at the stage where the US is threatening to wind up Turkish participation in the program.

The Turks will not be immediately cut off from the industrial side of the program, Lord made clear. They will be slowly throttled off through early 2020.

Valerie Insinna of Defense News asked how the US would deal with the Turkish pilots’ knowledge of F-35 and NATO tactics should Turkey buy the S-400. Lord didn’t really answer her question so I followed up and asked how they would ensure the knowledge wasn’t shared. Winternitz noted that Turkey is bound by bilateral and NATO agreements that restrict sharing such information and said they expected the Turks to abide by those.

In that same vein, the NATO policy director went to some lengths to reinforce that the US expects Turkey to remain a bulwark of NATO and for bilateral relations to remain vibrant, pointing to the six US F-15s that will be heading to participate in the upcoming Anatolian Eagle exercise. “We are doing a lot of things with Turkey across the entire spectrum,” he told reporters.

However, if Turkey does buy the S-400, it will probably be violating NATO policy as established at the 2016 NATO Summit. Winternitz said.

Perhaps most importantly to Turkey, Lord said: “Let me be clear. Turkey still has the option to change course.” Nothing, she said earlier, that has been done or is planned to be done in reaction to Turkey’s plan to buy the Russian SAMs is “irreversible.”  ,

There doesn’t seem a lot of room left for maneuver, however. On Tuesday, Al Jazeera reported that Erdogan dismissed US efforts to sell Patriot surface to air missiles instead of Turkey buying the S-400.

“There is an agreement. We have determination. It is out of the question to take a step back from it,” Erdogan said in Istanbul. The report adds that the “offer from the United States to sell Patriot missiles to Turkey was not as good as the Russian offer.”

Perhaps the best line of the briefing today was offered by Winternitz. Asked why Turkey wants to buy the S-400, he largely sidestepped the issue. But he did say: “Listen, Turkey is obviously in a pretty tough neighborhood.”

Regardless of how tough its neighborhood is, Turkey stands to lose quite a bit if it goes ahead, Shahanan wrote to his counterpart:

“Pursuing this path will cause a loss in jobs, gross domestic product, and international trade. President Trump committed to boost bilateral trade from $20 billion currently to more than $75 billion, however that may be challenging if the United States imposes CAATSA sanctions,” he said.

And, in an indicator of how frayed the relationship has become, the American defense secretary said: “I would like to ensure that we manage this matter in a respectful way, to preserve other aspects of our deep security cooperation.” (emphasis added).

In a recent piece for us, Robbin Laird outlined the choices the Turkish leader faces, saying, “Erdogan is acting is if his membership in NATO is a birthright which allows him significant room for maneuver to expand south and east. He needs to learn that he has significantly less room for maneuver if he continues to stab the West in the back.” He may have run out of room.

This piece was published by Breaking Defense on June 7, 2019. 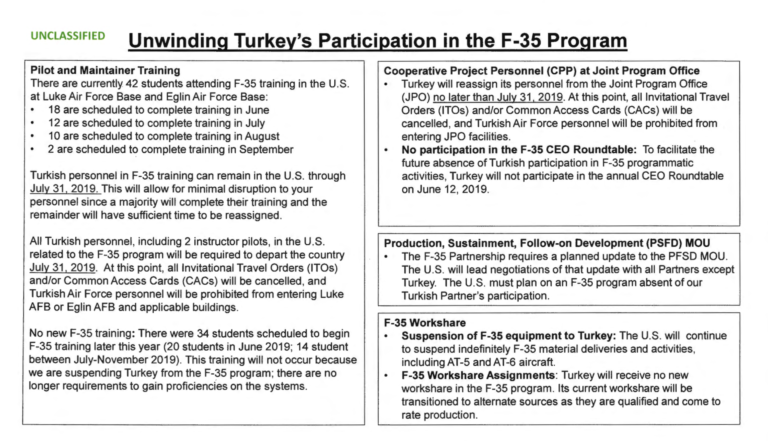