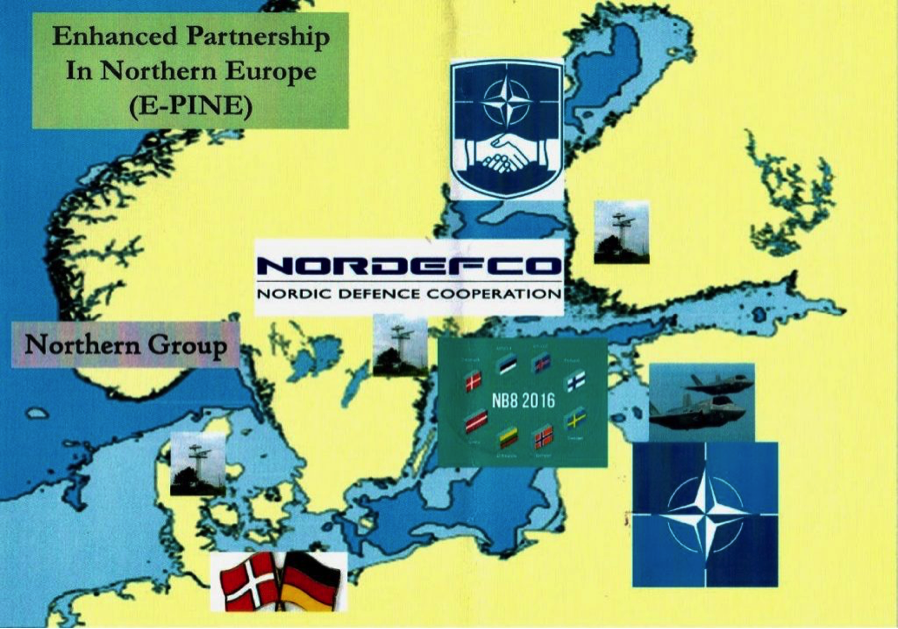 As Norway looks to its defense transformation and working out ways to work more effectively with its allies in extended defense and deterrence, it faces change in Europe associated with significant dynamics of change in Europe from Brexit to Catalonia.

At the same time, the US is dealing with the Middle East as well as the Koreas as President Trump and his team sort through shaping a way ahead for the US and its allies in dealing with the threats of weapons of mass destruction.

There is much uncertainty in the strategic environment on the allied and on the side of the threat envelope for Norway as well.

In such a context, it is not surprising that the Nordics are working ways to collaborate more effectively in the defense of their region.

One way to do this is the cross-border training they are engaged in with Sweden and Finland.

Here squadrons from Norway, Sweden and Finland work together every week on cross-border training activities.

And the air space being used is very significant as well.

Europe as an operational military airspace training area is not loaded with good training ranges.

The range being used for CBT is very large and is not a cluttered airspace, which allows for great training opportunities for the three nations, and those who fly to Arctic Challenge or other training events.

And the range flies over land so there is an opportunity for multi-domain operational training as well.

As Harald Malmgren described such activities within the boarder European context:

A new “cluster” of European nations with a common security objective has quietly emerged recently in the form of focused military cooperation and coordination among the Nordic nations, Poland, the Baltic States, and the UK.

This cluster is operating in close cooperation with the US military.

The Danes, Norwegians, the Swedes and Finns are cooperating closely together on defense matters.

Enhanced cooperation is a response to fears of Russian incursions, which are not new, but have roots in centuries of Russian interaction with Northern Europe.

It is also a response to the weak defense and security policies of most of the rest of Europe, notably the emasculation of any meaningful German military by the German government.

The Norwegians and Danes notably and reaching back to the UK are adopting the concepts of warfare pursued by the US military in its new focus on conflict in a fully integrated battle space operating in high intensity and at high speed.

At the heart of this integrated approach to building a credible deterrent to Russian “adventurism” and territorial incursions are the 5th generation F35 aircraft capable of coordinating and applying firepower from land, sea an air simultaneously.

Norway, Denmark and the UK are all acquiring the F-35 as part of the evolving collaborative approach.

The pilots in this assemblage of F35s are all trained in the same locations in the UK and the US, and are able to fly each other’s aircraft without adaptation.

It should be noted that Italy’s military wants to find a way to interact with the Northern Europeans as well as the UK and is acquiring F35s for itself to enable participation on short notice.

An evolving institution within which Nordic cooperation is being shaped is NORDEFCO.

In an interview I did with an American colleague who has worked in Denmark the past few years as a Senior Researcher at the Centre for Military Studies at the University of Copenhagen, we discussed NORDEFCO and its emerging role.

Question: How has Nordic cooperation progressed during your time in Denmark?

Initially, much of the cooperation was very political and often symbolic.

It has become less headline grabbing and more focused on the nuts and bolts of cooperation to shape real military capabilities as well as enhanced crisis management.

This is clearly a work in progress, but the change is significant.

NORDEFCO has been the organized effort to enhance cooperation among Denmark, Norway, Iceland, Finland, and Sweden.

NORDEFCO is now focused on ways to enhance operational military capabilities among the forces. For example, an agreement was reached last year on “Easy

Access” among the air and naval forces of the member states.

The agreement allows relatively free flow of those forces across the territories of the member states as agreed upon.

Clearly, major changes on both the Swedish and Finnish sides have facilitated enhanced cooperation.

The Finns changed their legislation so that they can both receive and give assistance in a crisis.

Certainly, cooperation between Sweden and Finland has increased significantly in the past few years.

As one Norwegian senior analyst put the question to me during my visit to Norway in April: “How far can we take our cooperation?

“We now have a mission paper which extends our framework of cooperation through 2020 and we are working a new one which extends the horizon to 2025.”

The members are working on an “easy access agreement” whereby the forces of the member states can cross borders easily to collaborate in exercises or in a crisis.

The NORDEFCO states are not focused simply on their own member exercises but participating in larger ones, which inevitably means NATO. As this analyst put it:

“The Swedes and Finns have a permanently placed officer in the Norwegian Joint  command post in Northern Norway which certainly allows them to plan effectively for exercises, including this fall’s Trident Juncture.”

This analyst argued that there is a clear upswing on the level of cooperation and its significance as well.

“I think the discussions among ministers have been taken to an unprecedented level. We also discuss crisis management.

“We have to prepare ourselves for handing a situation without the Swedes and the Finns, because they are not members of NATO.

“But we think that it is more and more likely that they would be fully involved in such a situation.

“I think our western partners realize this, so the American footprint in Norway could also be used to reinforce the Baltic states.

“Having access to Norwegians territory, and perhaps for a door in Sweden and Finland makes a big difference.”

This cooperation is unfolding in the context of the strategic shift to prepare for both crisis management and conflict in a high intensity warfare setting.

Part of the crisis management approach is to focus on civilian support to the military in a crisis, which the Norwegian Total Defense Concept or the Finnish mobilization concept or the Swedish reintroduction of conscription is clearly designed to do as well.

Clearly, timely and effective mobilization is critical to generate appropriate responses to crises and to provide tools to ensure more effective deterrence as well.