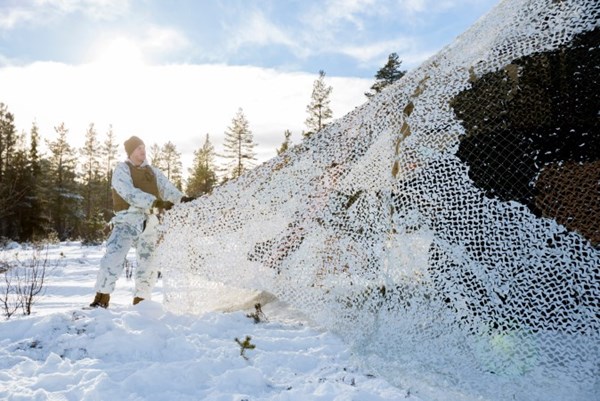 The strategic shift from counter-insurgency to force-on-force conflict is not only or simply preparing for a major conflict with peer competitors; it is about crisis management and escalation dominance.

On the one hand, the military capabilities are being reshaped to operate in such an environment, and there is a clear opportunity to leverage new platforms and systems to shape a military structure more aligned with the new strategic environment.

On the other hand, the civilian side of the equation needs even more significant change to get into the world of crisis management where hybrid war, mult-domain conflict and modern combat tools are used.

While preparing for large-scale conflict is an important metric, and even more important one is to reshape the capabilities of the liberal democracies to understand, prepare for, and learn how to use military tools most appropriate to conflict management.

This means putting the force packages together which can gain an advantage, but also learning how to terminate conflict.

What was clear from my visit to MAWTS-1 and getting a chance to look at the work of the latest WTI is that the Marines are working ways to enhance the combat capability of the MAGTF but in a way that can reach back to joint assets and shape evolving capabilities.

The Aussies certainly have recognized the innovations which the Marines are engaged in and see these as symmetrical with their own transformation.  And the Marines are now regular visitors to Northern Australia.

MRF-D is a six month rotation that started as an agreement between former President Barack Obama and former Australian Prime Minister Julia Gillard to conduct exercises and train with the Australian Defence Force.

The rotational deployment of U.S. Marines affords a combined training opportunity with Australian allies and improves interoperability between the two forces. This provides the Marines, ADF and other partners the opportunity to develop relationships, learn about each other’s cultures and share military capabilities….

As the Australian Defence Minister underscored about the joint training:

“These Initiatives strengthen the ability of Australia and the US to work together, and with regional partners, in the interests of regional stability and security,

The minister said that since 2012, the MRF-D had been increasing in size and complexity, further enhancing the interoperability and capability of Australian and US forces.

“During the six-month training period, the US Marines are expected to participate in 15 training activities alongside the ADF,” Minister Payne said.

“Other regional nations, including Indonesia, Japan, Malaysia, the Philippines, Singapore, Thailand and many more will also participate in or observe some of these training activities.

Now the Norwegian government has announced a similar agreement to train with the USMC in Norway.

The Norwegian government has decided to welcome continued USMC rotational training and exercises in Norway, with a volume of up to a total of 700 marines, initially for a period of up to five years, says Minister of Defence Frank Bakke-Jensen.

The Norwegian government have decided that they are positive to extending this initiative and adding a second location.

The potential increase in volume will be located at Setermoen in Troms. -More predictable rotational USMC training and exercises in Norway will significantly improve opportunities to develop and enhance interoperability between USMC and Norwegian forces, says the Minister of Defence.

In times of crisis and war Norway will rely on U.S. and other allied military reinforcements. This is at the core of Norwegian security policy and is further emphasized by our NATO-membership.

We have a long-standing tradition for inviting allies to train and exercise in Norway. This is underlined in the current long-term plan for the Armed Forces.

The Marine Corps rotational force constitutes an important contribution to NATO’s reinforcement plans for the defence of Norway. The initiative has proven that training and conducting exercises together with allies has had a positive impact on the operational capability of our own forces, says Bakke-Jensen.

The United States Marine Corps (USMC) and Norway have a long-standing and successful relationship that we look forward to strengthening. We will continue the dialogue with the U.S. and the USMC, aiming for mutual agreement in the near future on the continuation of the rotational training and exercise activity, says Frank Bakke-Jensen.

This rotational force agreement builds on the framework of the longstanding agreements between the U.S. and Norway on prepositioning and reinforcement, renewed in 2006 in the Memorandum of Understanding Governing Prestockage and Reinforcement of Norway. The renewal of the agreement, approved by the Storting (Parliament), opens for considerable American training and exercises in Norway.