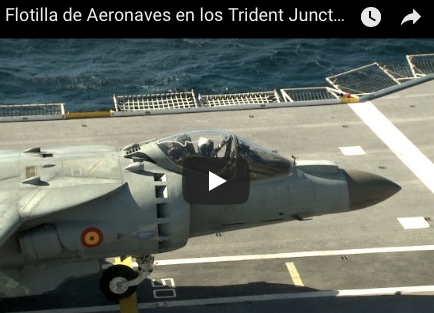 In an article published on October 24, 2015, we looked at the role the Spanish as a key host to the Trident Juncture 2015 exercise

The Spanish are key participants in the Southern tier focus of the large scale NATO exercise Trident Juncture 2015.

The Spanish joined NATO in the 1980s which was a major historical shift and one which contributed to the ending of the Cold War.

Members of the Second Line of Defense team were involved in the Spanish discussions at that time as well.

It is often forgotten that political military dynamics can be even more important than strictly military operations in deterrence with a competitor like Russia.

Not only have the Spanish participated with their Eurofighters in Baltic air defense, but their engagement in Mediterranean defense activities such as the TJ exercise has been signifiant as well.

Nearly 8,000 military personnel (nearly 3,000 from the Navy and Marine Corps) are involved from Spain and involve many assets, including the LHD Juan Calos I and its helos and harriers, its Aegis frigates, submarines and other assets.

In the video below (in Spanish) some of the assets are shown and their role explained by Spanish officials.