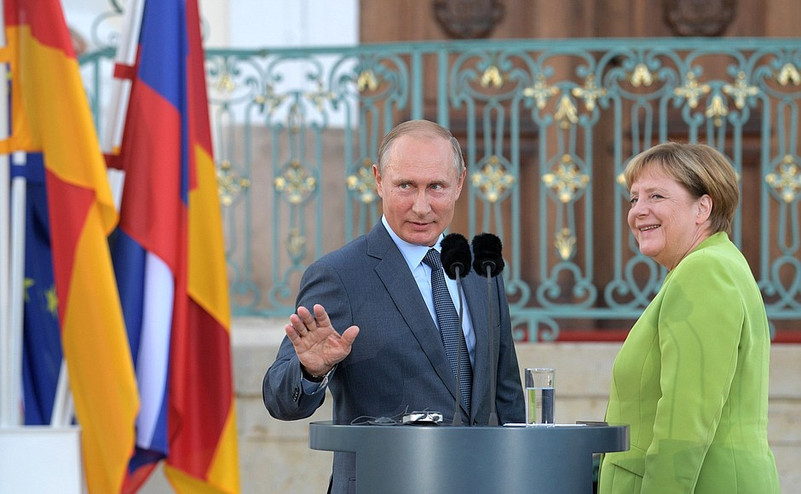 The challenge of working energy relations with Russia is a significant one, notably for Germany.

The building of a new natural gas pipeline from Russia to Germany and Europe more generally, called Nordstream II, has been the focus of controversy for several years, most recently by President Trump at the last NATO Summit.

A study by the European Union published in 2014 highlight the energy dependency challenge for Europe and we published an article on May 29, 2014 discussing that report.

2014-05-29  When Washington has a problem, it is good to have a study announcing that whatever Administration moving ahead on the problem, which most often has been caused by the opposition party in earlier years, with little or no causative impact from that Administration’s party.

Brussels has a variant of the same approach – issue a policy paper if you have a problem and come up with a complicated statement of the problem and assert that a resolution is on the way, given time and enough money and enough consensus among the national governments.

With the Russians moving rapidly forward on the use of energy as a policy tool, it is not surprising that the EU has now issued a policy paper assuring us that a different future is at hand, in which the EU will be much more effective in deflecting Russian pressures.

According to the Press Release accompanying the announcement of the advocacy for a new policy.

The European Commission reacts on the current geopolitical environment and the EU´s import dependence: It advocates a new European Energy Security Strategy. Diversifying external energy supplies, upgrading energy infrastructure, completing the EU internal energy market and saving energy are among its main points. The strategy also highlights the need to coordinate national energy policy decisions and the importance of speaking with one voice when negotiating with external partners. It builds on the progress already achieved since the gas crisis in 2009. The proposals of the Commission, including actions to ensure uninterrupted supplies this winter, will be discussed by EU Heads of State or Government at the European Council on 26-27 June.

European Commission President José Manuel Barroso said: “The EU has done a lot in the aftermath of the gas crisis 2009 to increase its energy security. Yet, it remains vulnerable. The tensions over Ukraine again drove home this message. In the light of an overall energy import dependency of more than 50% we have to make further steps. The Commission has tabled a comprehensive strategy today which will be discussed by EU leaders in June. I count on their strong support, since increasing energy security is in all our interest. On energy security, Europe must speak and act as one.”

European Energy Commissioner Günther Oettinger said: “We want strong and stable partnerships with important suppliers, but must avoid falling victim to political and commercial blackmail. The EU and its Member States have a long list of homework in front of them: Collectively, we need to reinforce our solidarity with more vulnerable Member States. We also need to complete the internal energy market, improve our infrastructure, become more energy efficient and better exploit our own energy resources. Moreover, we need to accelerate the diversification of external energy suppliers, especially for gas. Only concrete actions will help.”

To ensure uninterrupted supplies this winter, the Commission proposes comprehensive risk assessments (stress tests). These would be conducted on the regional or EU level by simulating a disruption of the gas supply. The aim is to check how the energy system can cope with security of supply risks and based on that develop emergency plans and create back-up mechanisms. Such mechanisms could include increasing gas stocks, decreasing gas demand via fuel-switching (in particular for heating), developing emergency infrastructure like, for example, completing reverse flow possibilities and pooling parts of the existing energy security stocks.

To address the medium- and long-term security of supply challenges, the Commission proposes actions in several key areas:

Recent events have raised EU-wide concerns about ensuring uninterrupted energy flows as well as stable energy prices. At the European Council of March 2014 the Commission committed to conduct an in-depth study on European energy security and to present a comprehensive plan on how to reduce EU energy dependence. The findings and the proposals will be discussed at the European Council on 26-27 June.

On the one hand global energy demand is growing and is expected to increase by 27% by 2030. On the other hand EU domestic energy production has decreased by almost one-fifth between 1995 and 2012. Today more than 50% of the EU’s energy needs are covered by external suppliers: in 2012 almost 90% of oil, 66% of gas and 42% of solid fuels consumed in the EU were imported, representing a bill of more than €1 billion per day.

A recent piece published by the EU Observer provides a perspective on the context in which such an effort is being generated:

Although EU countries import 88 percent of the oil that they use, as well as 42 percent of solid fuel, the main concern of the commission and governments is gas – 66 percent of Europe’s gas is imported at a cost of more than €1 billion per day.

Of the 400 billion cubic metres of gas consumed in the EU each year, around 40 percent comes from Russia’s state-owned Gazprom. The majority of this is piped through Ukraine, currently embroiled in a dispute with Russia over how much it owes Gazprom for its past and future gas supplies…..

“We want to complete the internal energy market … and move away from a monopoly, Russia in this instance,” (EU Energy Commissioner) Oettinger noted.

The commission is also anxious to increase the amount of gas it buys from Norwegian company Statoil, which currently provides 33 percent of the bloc’s gas compared to 39 percent from Russia’s Gazprom.

But while Oettinger said a further 10 billion cubic meters per year could come from Norway in the short-term, EU officials have indicated that a larger increase in long-term supply will depend on whether Norway develops new gas fields in the Barents Sea.

In the meantime, the commission wants to run “stress-tests” over the summer to assess whether European countries could cope if Russia turned off the gas taps during the winter.

“We will look at an energy efficiency strategy for the next decade,” said Oettinger.

The paper confirmed that a terminal to handle imports of Liquified Natural Gas in Lithuania will be completed by the end of 2014.

The Commission paper can be found here:

For a study (Ensuring Energy Security in Europe: The EU between a Market-based and a Geopolitical Approach by Raphaël Metais), which questions whether the EU approach currently adopted can actually work, see the following:


And the Germans and Russians are marching forward in building out the new pipeline, despite US, Northern European and Central European concerns.

A recent article published by Andrew Rettman in the EuObserver highlights the Russian-German dynamic.

Russian leader Vladimir Putin has joined forces with Germany against the US over a new gas pipeline.

His weekend trip, which included a visit to Austria, also struck a symbolic blow against EU diplomatic sanctions over his invasion of Ukraine.

German chancellor Angela Merkel and Putin defended the Nord Stream 2 gas project at their meeting in Meseberg Castle, outside Berlin, on Saturday (18 August) in Putin’s first bilateral visit to Germany since the invasion in 2014.

“In connection with Ukraine, we will also talk about gas transit. In my view, even if Nord Stream 2 exists, Ukraine has a role to play in gas transit to Europe,” Merkel said ahead of their three-and-a-half hour talks.

The project will “perfect the European gas transport system and minimise transit risks. It will ensure supply for growing consumption in Europe”, Putin said.

“Nord Stream 2 is an exclusively economic project. It does not close any possibilities for transit of Russian gas through Ukraine,” he added.

“Germany is one of the largest buyers of Russian energy resources … consumption of Russian gas is growing from year to year. Last year, it increased by 13 percent,” he also said.

The pipeline, which is being built, will concentrate 80 percent of Russian gas sales to Europe on the German route from 2020.

Its critics say it will entrench European energy dependence on Russia and help Moscow to cut off Western allies, including Ukraine, for strategic reasons in future.

The Meseberg meeting came on the heels of Putin’s visit to Austria (Photo: Kremlin.ru)