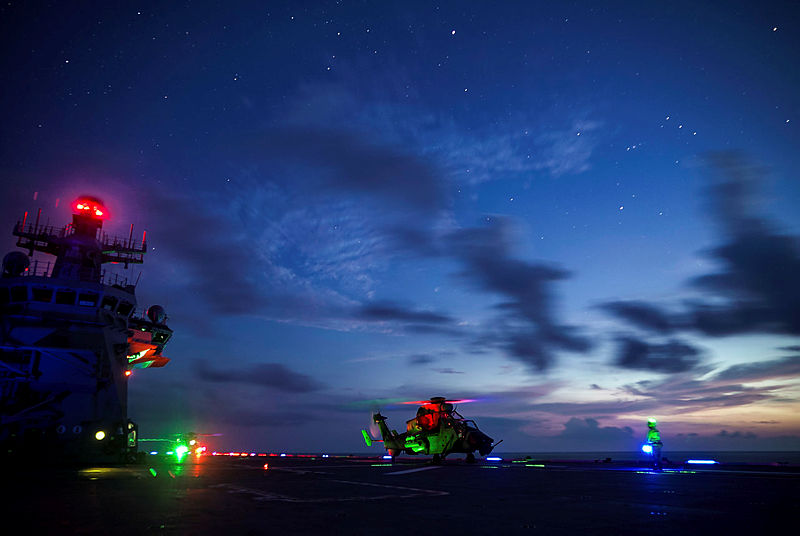 Canberra, we have a problem. It’s the public diplomacy around Australia’s relationship with the Chinese state—in particular, the People’s Liberation Army and the civilian and militia elements that operate with it in the South China Sea.

A ream of ‘public affairs’ material was produced for Australian and international media over the three- month deployment—more than 800 images, 100 articles and 40 videos covering a range of activities including disaster assistance planning, community engagement, multinational naval manoeuvres and military training with regional partners in India, Sri Lanka, Indonesia, Malaysia, Singapore, Thailand and Vietnam.

No doubt, the deployment achieved much good in deepening Australia’s relationships in the region. It’s been a fine exercise in regional presence and showcasing of Australian capability, along with building the capacity to work closely with regional militaries in an increasingly difficult part of the world. Let this deployment become the new normal and be part of a persistent operational presence working closely with regional partners’ forces.

But in all the words and images that were produced by what was apparently the largest public affairs team ever deployed on a RAN ship, there was not a word about one of the biggest things that happened during the three months at sea: the crews of fishing vessels used lasers against Australian helicopter pilots operating in international waters in the South China Sea, causing them to have to land their aircraft for precautionary reasons.

That’s a dangerous set of acts against Australian service personnel. Affecting the vision of helicopter pilots in the difficult environment that defines seaborne operations exposes them to additional risks.

The story was revealed in The Strategist yesterday by Euan Graham, an academic who travelled on the task force command ship, HMAS Canberra, with the navy as part of Indo-Pacific Endeavour. We don’t yet have confirmation that the fishing vessels were Chinese. However, no other fishing fleets have a track record of doing this in the South China Sea, and no other nation has the motive to do so there when it comes to the presence of the Australian navy.

We do know that Chinese fishing fleets, along with militia and coastguard vessels, are core elements of the Chinese state’s successful strategy of seizing disputed parts of the South China Sea and exerting its control.

But, maybe as disturbing as the danger that those who lasered Australian helicopter pilots created, we also know that when it came to public comment about the task force’s time in the South China Sea, we heard a lot of positive things, and not a word about the reality of the lasering incident.

As we normally are, we were engaged by other navies; it wasn’t just Chinese, the Indonesian navy hailed us.

I’ve figured out in my three months’ journey with the navy, they’re quite a friendly bunch. They will get hails as they go past from different ships. They’ll want to know who we are, where we’re going and what our intentions are.

The Chinese were no different. They were friendly, they were professional and said g’day.

Either he was actively avoiding mentioning the dangerous behaviour of fishing vessels and the risks it posed to Australian service personnel, or pointing lasers at helicopter pilots is just another way of saying g’day.

The idea that the task force commander simply didn’t know about the actions can be ruled out. This kind of operational incident would certainly have made its way to him rapidly, and then from him to the defence force’s operational command at Bungendore near Canberra. In fact, every activity of the Australian task force in the South China Sea would have been managed and run with the risks of engaging with Chinese vessels—military, coastguard, militia and fishing vessels—uppermost in the minds of naval planners.

What I don’t get about the way this has been handled to date is whose interests it serves to hide what happens when Australian service personnel operate lawfully in the waters of the South China Sea.

I know it’s in the interests of the Chinese state to have those subject to its aggressive behaviour keep silent—that helps portray those who do speak up, notably the US, as isolated on this issue.

However, part of the rationale for the task force going through the South China Sea is to affirm international law and maintain free international waterways. That’s necessary because of the aggressive militarisation of that body of water by Chinese forces in recent years.

Clearly, working with the Vietnamese navy in the South China Sea was part of this—and according to Euan Graham, again, this required the task force to go out of its way to include Vietnam in the activity.

But to have the strategic communications effect that you would hope would be at the heart of the deployment, it seems essential to publicise the aggressive and dangerous behaviour of these fishing vessels—and to make every effort to identify the nation operating them so that the incidents can be raised formally to prevent a recurrence.

I would be surprised if imagery and other information from the deployment at the time of the incidents can’t show this right now.

Pretending that none of this happened, and that it was an entirely problem-free and friendly time in the South China Sea, is self-defeating. It leaves the Australian public out of the loop when it comes to the risks our service personnel are running to preserve freedom of navigation and push back against aggressive on-water tactics that are licensed by the highest level of national leadership in China.

It also downplays the commitment of our defence force in protecting national and international interests in the security and openness of the waters of our region.

Lastly, this episode raises questions about what else might have happened on this deployment, and whether there were any other actions by Chinese fishing vessels—or militia, coastguard, aircraft or even PLA Navy vessels themselves—that we have yet to hear about. Maybe there are other ways they said g’day.

Michael Shoebridge is director of the defence and strategy program at ASPI. Image courtesy of the Department of Defence