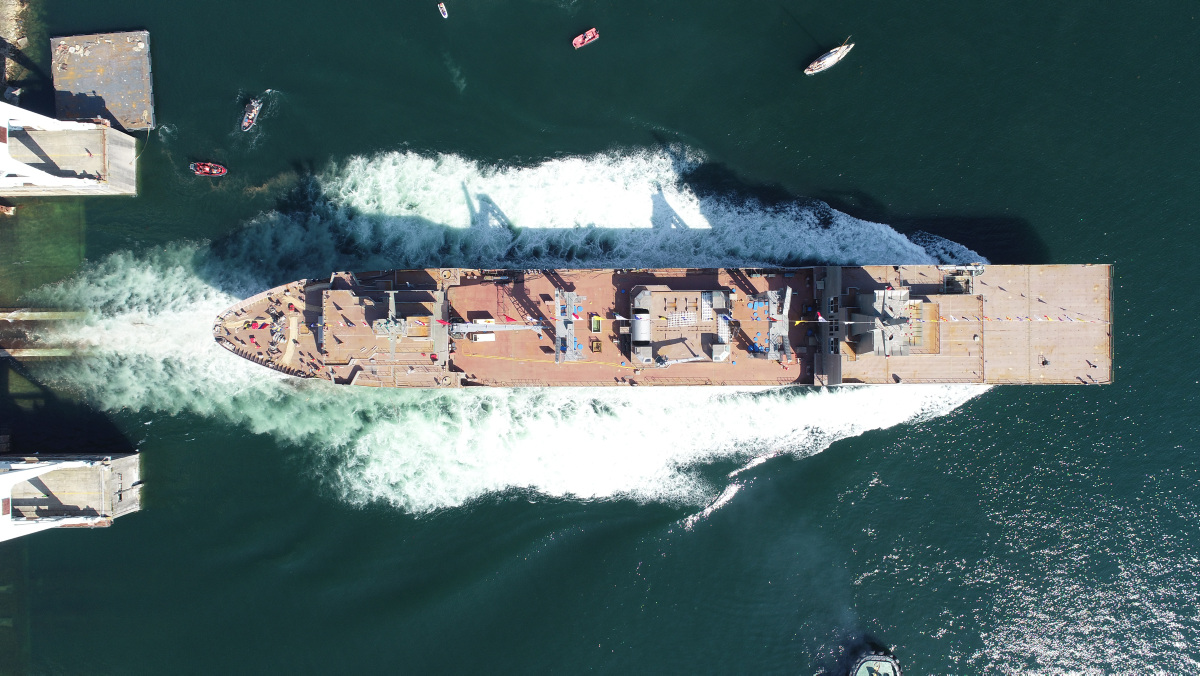 Recently, the Royal Australian Navy’s latest support tanker was launched in a ceremony in Ferrol, Spain where the tanker was built.

It is clear that the core meaning of a tanker for a combat fleet is to enhance its sustainability at sea.  We have in the past interviewed Military Sealift Command tankers and have discussed their role and the importance of what they bring to the fight.

And this aspect has been the key point highlighted in the various articles discussing the new tanker.

According to the Australian Department of Defence:

The Royal Australian Navy is another step closer to welcoming its new fleet of support tankers into service, following the successful launch of NUSHIP Stalwart at today’s ceremony in Ferrol, Spain.

The delivery into service of the Supply class replenishment vessels from next year will provide the Navy with vital afloat logistics support to enable our ships to remain at sea longer.

Chief of the Royal Australian Navy, Vice Admiral Michael Noonan AO, RAN said the Supply class AOR vessels will enable Navy to maintain a long-term presence at sea and provide combat support to our frigates, destroyers and combatants wherever they operate in the world. NUSHIPs Stalwart and Supply will replace the current replenishment tankers HMAS Sirius and ex-HMAS Success, which was decommissioned on 29 June 2019.

According to another article, the core aspect of sustainability, namely fuel and provisions was highlighted as well.

Minister for Defence Linda Reynolds said the launch of the second Supply-class auxiliary oiler replenishment (AOR) vessel marked an important milestone in Australia’s $90 billion investment in the largest regeneration of Navy since the Second World War.

“The delivery into service of the Supply-class replenishment vessels from next year will provide Navy with vital afloat logistics support to enable our ships to remain at sea longer,” Minister Reynolds said.

“These ships will ensure Navy can make sustained and long-term contributions to regional and international security in support of our national interest, and further our strong relationships with countries across Southeast Asia and the Pacific.

“These ships will be a force multiplier for our Navy’s capability in support of sustained operations across the Indo-Pacific region.”

“The Supply-class AOR vessels will enable Navy to maintain a long-term presence at sea and provide combat support to our frigates, destroyers and combatants wherever they operate in the world,” Vice Admiral Noonan said.

NUSHIPs Stalwart and Supply will replace the current replenishment tankers HMAS Sirius and ex-HMAS Success, which was decommissioned on 29 June 2019.

But if you are building an integrated force, these core functions of support traditionally understood are not enough.

In my interview last April in Canberra with recently retired Chief of Navy, Vice Admiral Tim Barrett, he underscored how the Royal Navy is being rebuilt along these lines.

The kill web approach was clearly what he is working from when he discusses force modernization for the Navy.

Barret provided a particularly compelling example of the approach and what it means in terms of acquisition.  He described a recent visit to Spain where his wife was privileged to launch a new tanker to support the maritime force.

That tanker has on it a combat system which allows it to operate in a joint manner with the wider maritime force and to be integrated into the wider ADF.

This was a good illustration of what we have argued for, namely “no planform fights alone” if linked with platforms and assets in a broader kill web.

Barrett argued that a key consideration for naval procurement was the nature of the combat systems being placed on the hulls as well as their potential for continuous modernization which is part of what he meant when he argued for a continuous shipbuilding strategy.

The operational advantage that can go to a 21stcentury combat force can come as much for the clean room where software is developed as from the armaments onboard any particular vessel.

And in part this is because if one can shape a kill web force one can get this sort of outcome:

“An Air Warfare Destroyer is as important to the RAAF as is an F-35 to the RAN.”

He underscored that: “We have deliberately separated the procurement strategy for the hull from that of the combat management system.

The importance of building into new platforms this broader notion of integrated force sustainability is not widely understood.

For example, in discussing the USMC acquisition of the CH-53K and moving on from the legacy CH-53E, almost the entire discussion has revolved around how the new asset performs better in load bearing and ability to operate in the difficult conditions that can face the USMC support force.

But with building in of a modern IT and ISR systems into the new aircraft, it becomes a very different kind of support asset.

And with a cockpit built to maximize the flexibility in both contributing to an integrated distributed force as well as leveraging it, the new combat platform is a key player in the USMC transition envisaged in the new USMC Commandant’s recent guidance.

As I noted in an article published on June 22, 2018 about the contribution of the K to force transformation:

With peer adversaries emphasizing technological change and force modernization, focusing on strategic advantage for US and allied forces is a key element for combat success.

At the heart of such an approach, clearly will be the ability to operate more effective distributed forces and to leverage the capability of US and allied forces to operate flexibly and not relying on a rigid centralized system with a core emphasis on combat mass.

Working ways to distributed force but concentrate fires is at the heart of the transformation necessary to prevail in the strategic shift.

For the MAGTF, this means taking the core approach around which a MAGTF has been crated and extending its reach with integrated fires, as is conceived of with regard to F-35-HIMARS integration or the use of the new G/ATOR system, and building effective force packages which can operate in an integrated but flexibly deployed distributed force.

The CH-53K comes at a time when this transition is being worked.

As the heavy lift member of the MAGTF team, it will provide a key element of being able to carry equipment and/or personnel to the objective area.

And with its ability to carry three times the external load of the CH-53E and to be able to deliver the external load to different operating bases, the aircraft will contribute significantly to distributed operations.

But the digital nature of the aircraft, and the configuration of the cockpit is a key part of its ability to contribute as well.  The aircraft is a fly-by-wire system with digital interoperability built in.

And with multiple screens in the cockpit able to manage data in a variety of ways, the aircraft can operate as a lead element, a supporting element or a distributed integrated support node to the insertion force.

A key change associated with the new digital aircraft, whether they are P-8s or Cyclone ASW helicopters, is a different kind of workflow.

The screens in the aircraft can be configured to the task and data moved throughout the aircraft to facilitate a mission task-oriented work flow.

In the case of the CH-53K, the aircraft could operate as a Local Area Network for an insertion task force, or simply as a node pushing data back into the back where the Marines are operating MAGTBs.

In short, the aperture of sustainability is being expanded by the new combat platforms. They are both contributing to the operation of an integrated force AND leveraging it.