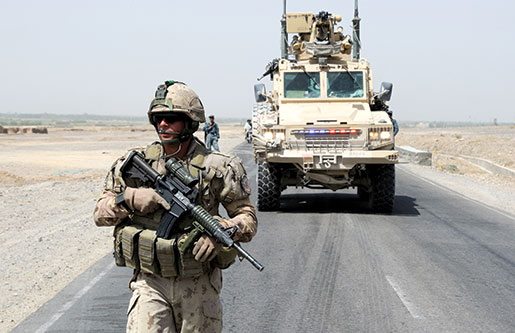 Was Canada’s involvement in the war in Afghanistan, over roughly 13 years, a wasted exercise?

Defence Minister Harjit Sajjan, who was deployed three times, avoided a direct response on December 9th when pressed for comment about a report from Washington earlier in the day that the U.S. military leadership had felt for some time that they could not win the war against the Taliban.

Published in The Washington Post, the report was based on “a confidential trove of government documents” which the newspaper says revealed that “senior U.S. officials failed to tell the truth about the war in Afghanistan throughout the 18-year campaign. They had made “rosy pronouncements they knew to be false and hiding unmistakable evidence the war had become unwinnable.”

The documents, to which the newspaper gained access through the Freedom of Information Act, included more than 2,000 pages of previously unpublished notes of interviews of more than 400 “key players” ranging from generals and diplomats to aid workers and Afghan officials.

The documents were the result of “Lessons Learned”, a project begun in 2014 by the Special Inspector General for Afghanistan Reconstruction, a small U.S. government agency which was trying to determine what mistakes had been made.

Now retired U.S. Army LGen Douglas Lute, the point man in the White House for presidents George W. Bush and Barack Obama, was among those interviewed. His notes included an statement that they “didn’t have the foggiest idea of what we were undertaking in Afghanistan. We fundamentally did not understand the country we were in.” Citing 2,400 lives lost, he asked, “was this all in vain?”

A total of 149 Canadian Armed Forces personnel were killed in the war, including four who died when the pilot of a U.S. aircraft mistakenly bombed a training exercise in April 2002. It was the largest number of Canadian military casualties on any single mission since the Korean War.

The Canadian Armed Forces’ involvement began in late 2001 when approximately 40 small Joint Task Force 2 special operations were secretly inserted. Regular forces arrived in Kandahar in early 2002 to fight alongside U.S. troops in Operation Anaconda, eventually relieving the Americans. A series of deployments continued through until most CAF personnel were withdrawn in 2011 and the final group pulled out in March 2014.

Four Canadian civilians also died. The first was diplomat Glyn Berry, killed by a suicide bomber in 2006, and then Calgary Herald journalist Michelle Lang died along with four Canadian troopers when their vehicle was destroyed by a roadside bomb in 2009. Then, in 2014, two accountant doing audits for the Canadian International Development Agency who were among 21 victims of a suicide bomber at a Kabul restaurant.

Minister Sajjan, when asked outside the House of Commons whether the Washington Post report was “a fair assessment” of the situation, given his own experience, initially replied that “you have to look at where Afghanistan was” before the September 2011 terrorist attacks on the U.S.

He pointed out that years of fighting in Afghanistan, including a massive Soviet presence from 1979 to 1989, had created turmoil. “When you go into an environment like this, you have to deal with the complexities,” he said. “We took the time to understand the environment.” The result has been that in Kandahar Stadium, where people used to be publicly executed, children are now playing soccer. “Where girls weren’t allowed to go to school, schools are opening and girls are actually going to school. Women who had to have a male chaperone to take them around, women are [now] allowed to walk freely.”

However, he conceded “there’s a lot more work that needs to be done” because “30 years of war torn turmoil can’t be fixed overnight and now that the responsibility for security that has been passed off the Afghan Security Forces, they’re able to hold their own and we’ll continue to support in a different way.”

Asked whether the notion that the war was seen at all levels of the U.S. military as “unwinnable” was something he had heard when he was on the ground as an intelligence officer, he said “we can’t boil it down to very simple things like that.”

Reiterating that once Canada had “a good understanding of what was going on” and began to realize its presence would have to be more than a military one, involving development work and capacity building. “A lot of lessons were learned very early on, and one thing that I can proudly say [is] that the Canadian Armed Forces and the resources […] put in by Canada had a substantial impact.”

Asked whether he was surprised by the report’s revelations, he said that as someone “who’s been on the ground war”, he was not surprised by how such a complex situation could be perceived that way. “But the work that has been done on the ground has had a significant impact,” he repeated, pointing out that Canada’s involvement had helped to set up the Afghan Security Force to operate independently.

Asked then whether the Canadian government had been kept abreast of the concerns in the U.S., Minister Sajjan would say only that the CAF’s “ability to understand the situation was quite high and we were able to share this with our partners.”

This article was published by Front Line Defence on December 10, 2019.